Several hex variants have appeared on the Chess Variant Pages, many of them on a hexagonal board of side 6. The oldest, by Siegmund Wellisch, does not have a rules page on this site yet. Later ones around when I joined these pages include those of Wladyslaw Glinski and Dave McCooey, along with Fergus Duniho's Hex Shogi and Roberto Lavieri's Toccata. Additions of my own include 4 Linepiece Hex chess, AltOrth, Anglojewish Chess, Hexgi, Hex Horngi, Horn Rimmed Compact (HRC) variants , Liu Yang, and Plattraum. Finally I have added one based on a slightly simplified version of Haynie's hexagonal Chess, using the simple Wellisch-orientation Brokers that can capture only straight ahead rather than the original variant's stronger pieces and swapping round the Wazrs and Viceroys so that the latter are not both bound to the same binding, and one based on Hexenspiel for completeness' sake. Trebuqi is not suited to this treatment as the Trilby on the middle level would in practice be another Trebuchet for want of levels far enough away, and I exclude Courier-style hex variants for similar reasons. I have also excluded Chevron Ranks and Gyokugi as level-changing versions of its pieces have yet to be named.

It occurred to me that one generic way to extend hex variants to 3d is putting pieces that would be similarly blocked by the front rank - or protective of each other if not blocked - on each level. Plainly it would not do to just have several levels the same as all the pieces without an orthogonal move - or with only a forward one - would be confined to their own level. Then I saw that levels could be arranged in a sort of Rook-Bishop-Queen-Bishop-Rook pattern, echoing FIDE Chess along the extra dimension. Thus the top and bottom levels would have the pieces from the 2d variants - save for replacing any royally-restricted piece with its capturable counterpart. The next two in would have the corresponding pieces moving one level for each coprime step or leap of its move. The middle level would have the compounds of the two, but with the royal restriction restored to the relevant piece, echoing the position of King as well as Queen in FIDE Chess.

The same logic can be applied to pieces from other boards such as the 9x9 Compact Hex Chess and Hourglass Hex Chess boards, which would give sizes of 305 and 325 respectively. I see the dimensions specified in the index to this page, however, as as the mainstream of the idea.

Thanks to this range of images I can show a wide sample of array extracts. To save space I show just the White camp and its vicinity.

Each camp of the Wellisch-derived variant is as follows:

Each camp of the Glinski-derived variant is as follows: 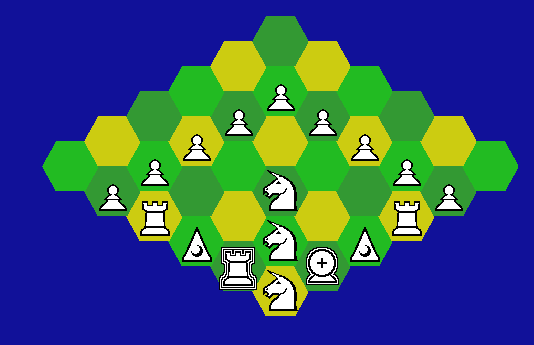 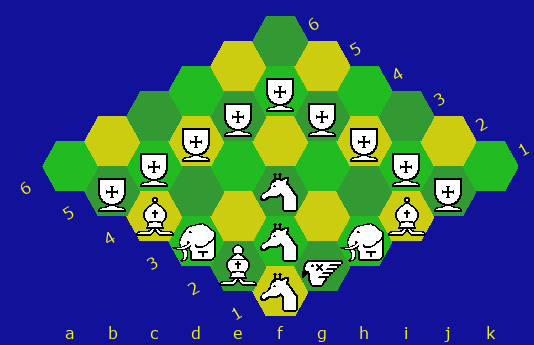 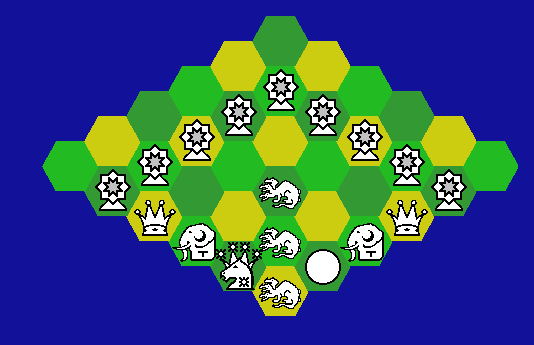 Each camp of the McCooey-derived variant is as follows: 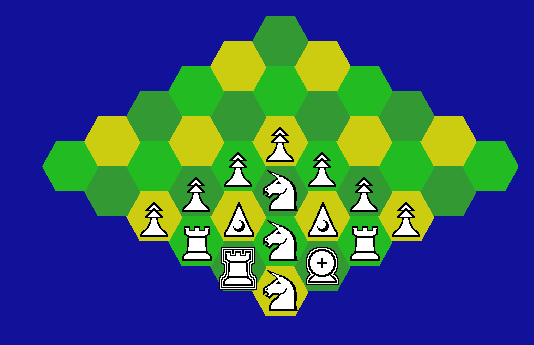 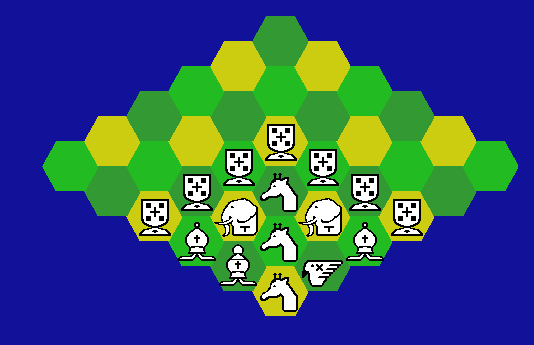 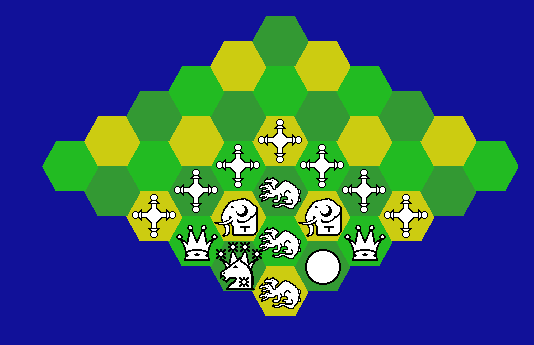 Each camp of the HRC Wellisch-derived variant is as follows: 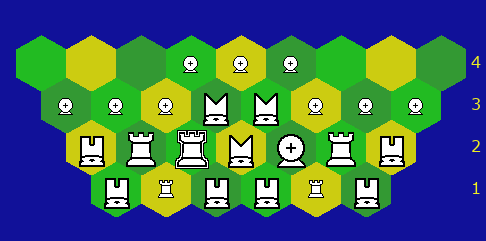 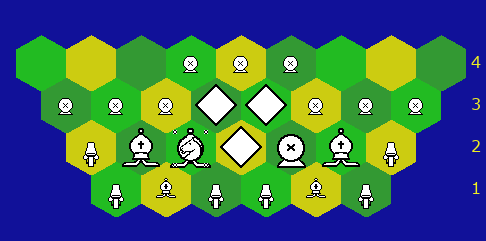 Each camp of the HRC Revergent-derived variant is as follows: 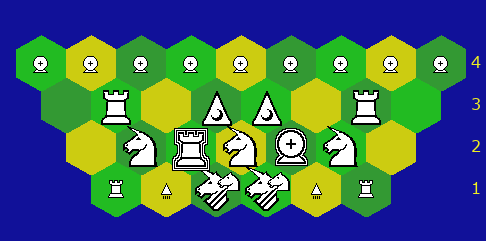 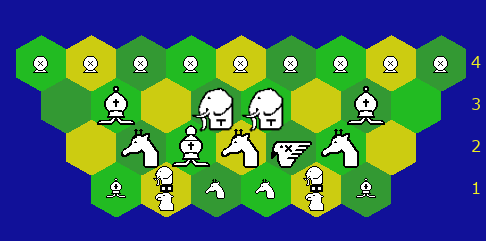 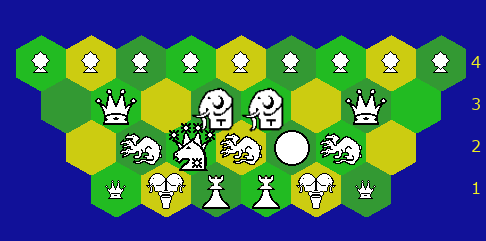 Each camp of the HRC McCooey-derived variant is as follows: 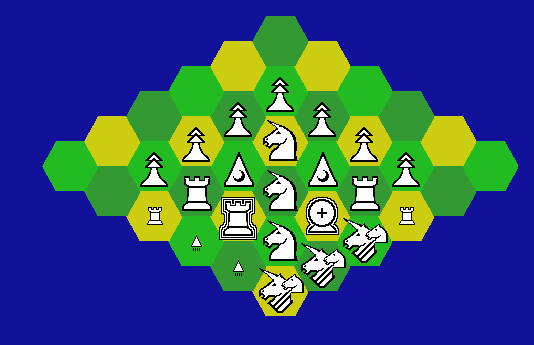 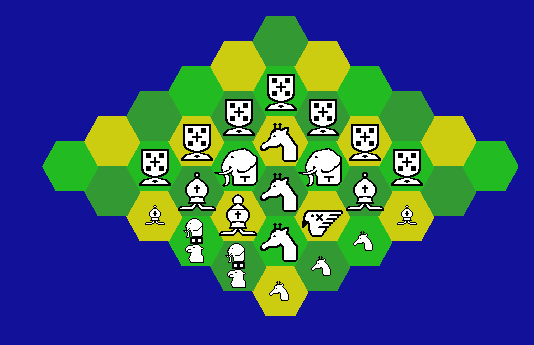 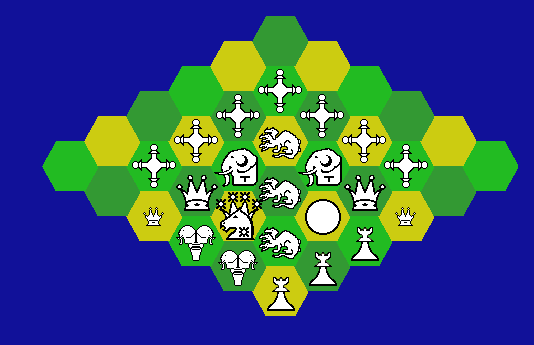 Each camp of the Liu Yang-derived variant is as follows: 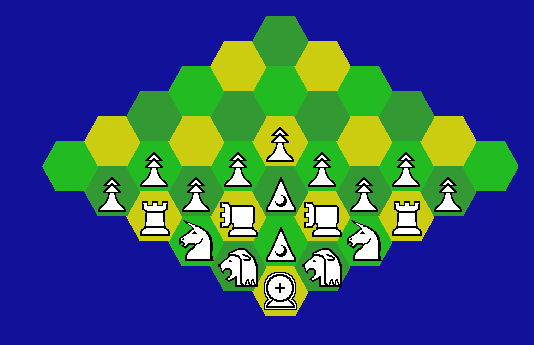 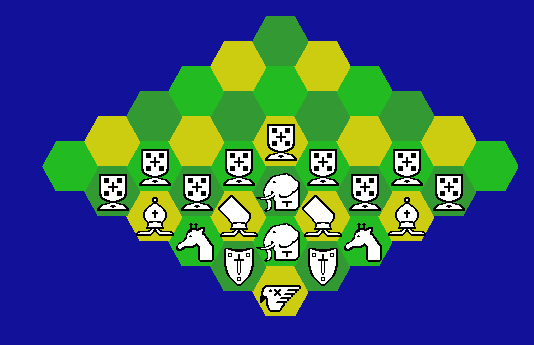 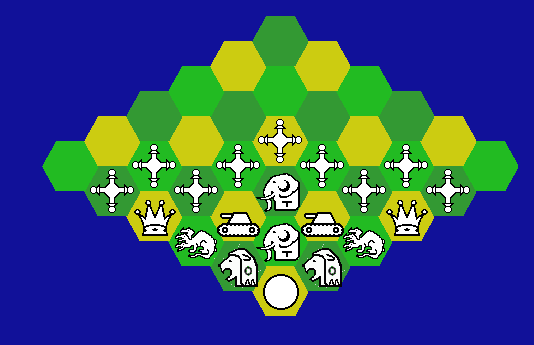 Each camp of the simplified-Haynie's-derived variant is as follows: 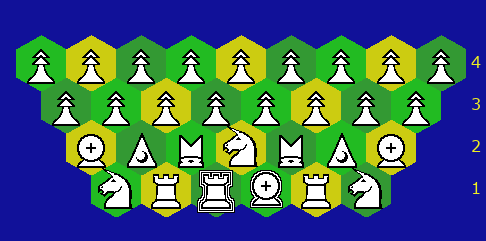 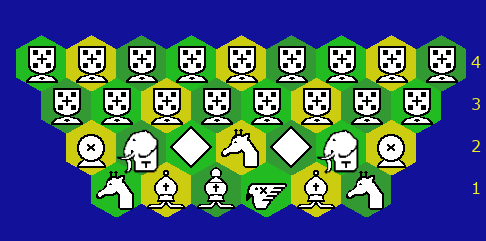 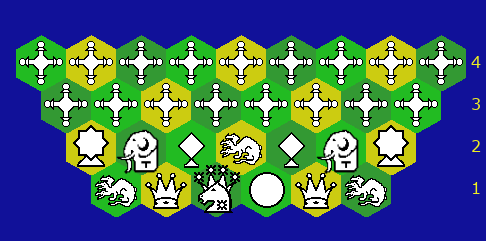 Each camp of the Hexenspiel-derived variant is as follows: 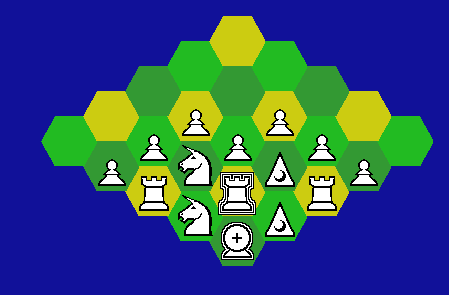 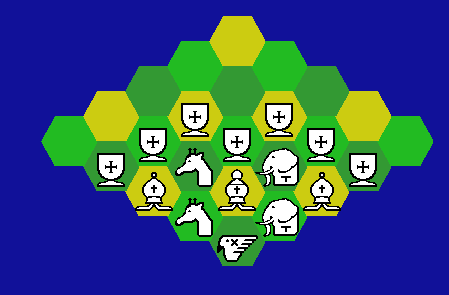 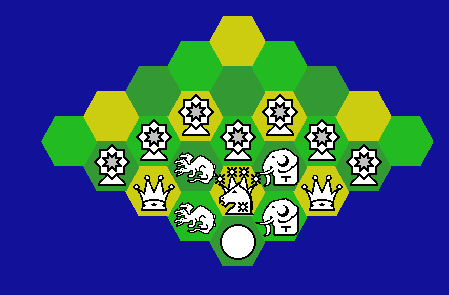 Gaps indicate pieces not depicted in the array extracts above for which I have yet to decide on an image. Unless otherwise stated, pieces starting on the top and bottom levels are the original 2d hex piece.

Symmetric pieces are defined the same way on both Glinski-level and Wellisch-level orientations.

The Worldruler and King must be kept out of Check. As Haynie's hex really does have a capturable Wazir, the corresponding middle-level piece in that is a Prince that moves like ther King but is capturable. 2d Toccata pieces are qualified with the word Rook afterwards, pieces starting on even levels with Bishop, and pieces starting on the middle level with Queen.

Part-symmetric and forward-only pieces are generally differently defined on the two orientations, or apply only on one.

Starting on the top and bottom levels and moving either within a level or up or down a column and are unbound is the SUPERBRASSGENERAL moves one step along any of the 8 orthogonals and 3 forward hex diagonals.

Pieces starting on the top and bottom levels that can move only within a level and are bound to all or part of that level: move descriptions are shoewn in green if specific to Glinski-level boards and in red if specific to Wellisch-level ones.

Three Horn Rimmed pieces are specific to the Wellisch orientation.

AltOrth pieces are specific to the Glinski orientation.

Unless otherwise stated rules are inherited from the 2d variant, but some clarifications are useful. If any further ones need adding I will gladly add them.

Thus works in reverse with pieces captured and reintroduced. Thus in 3d Horn Rimmed Hex a Rook returns as a Wing, a Bishop as a Mitre, and a Queen as a Princess.

Any double-step move applying to 2d still applies, and is extrapolated to other levels. Thus McCooey's optional double-step noncapturing initial move for Brokers also applies to Wielders and Brokerwielders.

Liu Yang's Grandduke swap becomes a Worldruler Swap in 3d, with no special powers for the capturable Duke and Landlord.

The combination of Cook with Waiter and Chef with Waitress to form Restaurateur and Restaurateuse reminds me of my joke about the man who tried to set up a restaurant as a one-man business. He was a chef first and a... (the pause is key to the pun) waiter second!