My variant Honeycomb Chess was designed to extend standard Chess to 3 dimensions with full-strength (or as a subvariant, double-strength!) pieces while retaining the original automatic rule that diagonal and Knight moves always take a piece forward or backward. For 2 players the geometry achieves that very effectively, with pieces inheriting most of their character from 2 dimensions. The drawback is the difficulty extrapolating a geometry with hex boards as ranks to more than 2 players. As ranks and files are not interchangeable by rotation, you cannot have two pairs of players playing across each other as in my own Fivequarters, or a player starting in each corner of a uniformly enlarged board as in 4 Armies.

2d Hex variants can often be extrapolated to 3 players. My own hex variants for 2 or 3 players on the same board (and page) include first Anglojewish Chess, from which the name of the Finch below derives, and more recently Hexgi and AltOrth Hex Chess. As this depends on players being in 3 of the 6 directions away from the centre, applying it to 3 dimensions means rotating the board. This replaces the change-of-rank rule for Bishops and Knights with a change-of-level rule, so there is still some restriction on these. This change now reflects the 2d change-of-file rule, which as a bonus restores the ratio of capturing to noncapturing Pawn moves to that of FIDE Chess.

Since posting this variant I have gone on to use a smaller board with this geometry (but for only 2 players) for Lengthleaper Hex Chess, and larger ones (with 4 players) for the second and third variants in my Armies of Faith series.

This variant reverses 2-player Honeycomb's 8 triangles of side 5 cells to 5 triangles of side 8 cells, to retain 8 ranks for each pair of players. This raises the number of cells by half from 120 to 180, maintaining both piece density (each player has as many pieces as in 2-player variants) and four-step range of diagonal moves. Levels are lettered from a-e, as these are no longer ranks. The 36 columns (too many to be covered by single letters) are numbered in the following order:

In the basic variant corner columns contain the pieces RQKQR, like a 5-file version of the back ranks of John Groeneman's Half Chess, with Queens on their own colour. The two columns adjacent to each corner have the same player's BNFNB, where F is a Finch physically represented by an inverted Rook. The three remaining columns adjoining each of those pairs are filled with Pawns. The third army can be represented by both armies of a third set distinguishable from the two identical sets. 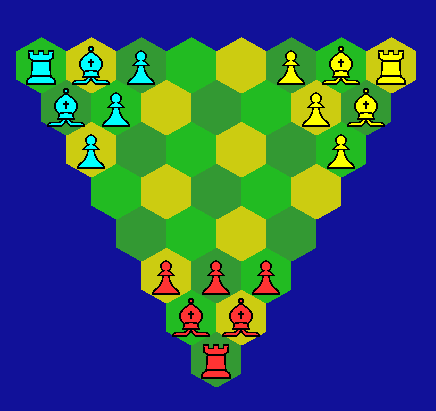 This diagram applies to levels B and D: 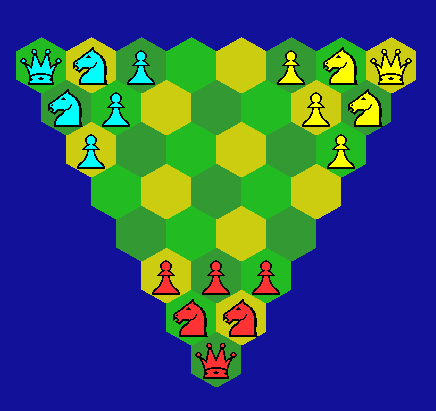 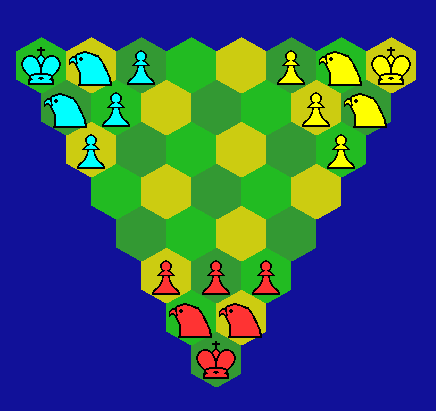 In 3-player Wildhoney Chess corner columns become (from top to bottom) RQKGR, where G is a Gnu. The adjacent columns become BCNCB, where C is a Camel. For this version it may be best to use three easily distinguishable sets, one for each army, with e.g. White pieces representing KQBBRP and Black ones representing -GCCNP. 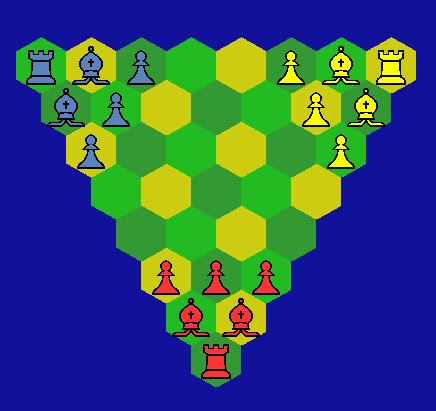 This diagram applies to level B: 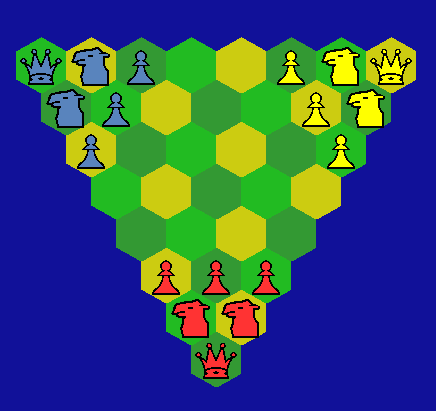 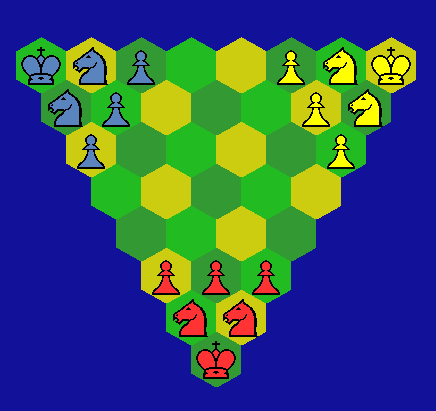 This diagram applies to level D: 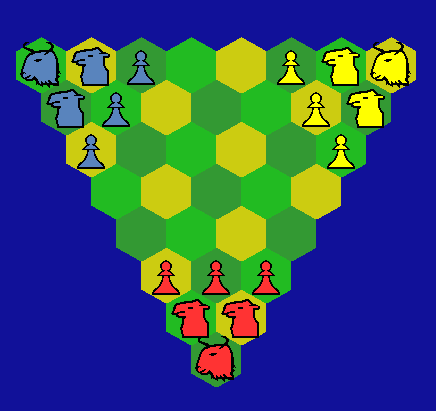 Pawnless subvariants of both are also possible for the same reason as Half Chess, the shortness of the second-rank pieces' moves on the board. These would not however save on physical pieces, as they would still require the back ranks of three FIDE sets.

Play proceeds in anticlockwise order starting with Red. As Pawns start on what is effectively their third rank there is no initial double-step move and therefore no En Passant. As this variant is both 3d and 3-player it will come to no surprise to those who know my variants that there is no Castling!

Pawns that have no further move are promoted to another capturable piece from the relevant variant's array.

In these variants the hex diagonal and hybrid diagonal are not used. As with the 2-player version, double-strength subvariants are also possible in which hex diagonals are treated the same as orthogonals, hybrid diagonals the same as standard diagonals, and obliques extrapolated from there. This version has the same effect on most pieces as it does for two players except that Pawns gain the hex-diagonal forward noncapturing move, as well as capturing moves along the two forward hybrid diagonals above and below it, to become Pawnouts. Note that the double-strength counterpart of the Finch is termed a COHEN as of February 2008.