This page uses the same board as many existing 3d variants. Asked to single out one such variant that captures my imagination I would say Petersen's 3d Space Chess, which extrapolates just the FIDE pieces to 3 kinds of plane, with no triaxial pieces. Also using this board are (Melander's) Chess3, (Trimm's) Chess3, Millennium 3d Chess, Nardeshir, (Bodlaender's) Space Chess, and Strato Chess.

It struck me that although all those games are 2-player, a simple stack of 3 FIDE boards would do equally well, or dare I suggest even better, for a 4-player game, with camps up against the four short edges. To try out this idea I followed Petersen's example of keeping it simple and extrapolating FIDE pieces to 3 kinds of plane. I used Raumschach Pawn extrapolation, with 2 noncapturing and 5 capturing moves. Contrast this to Crosstunnel, whose Pawns have 4 capturing to 1 noncapturing direction. I use one less than twice tbe FIDE number per army of each piece, except that to avoid an imbalance between Bishops I use the full number. This allows the game to be played with two distinguishable pairs of identical FIDE sets - that is, each set identical to one other and distinguishable from the other two - without having to ascribe different meanings to piece shapes. Each player uses pieces of one colour from one pair of sets. It also means symmetric pieces initially occupying a quarter of the board, the same as in the 2d game, and Pawns five sixteenths, a rather larger proportion.

It occurred to me that 3 level 4 player versions of other standard forms of Chess might also work. I quickly rejected applying it to Shogi: it needed too many pieces for single Shogi armies and too few for double ones, and anyway the orientation did not suit Gold and Silver moves. I then wondered about applying it to Xiang Qi, and finding it too hard to place Cannons without them threatening something undefended I settled on a 3-level 4-player version of pre-Cannon Xiang Qi, with one General aside and twice the XQ number of everything else. Again two distinguishable pairs of identical XQ sets serve the purpose.

Level 1, at the top, has each player's Queen in the corner, flanked by Bishops of one binding for each player but alternating between players. 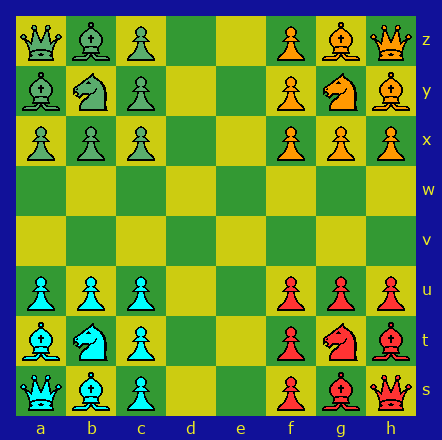 Level 2, in the middle, has each player's King in the corner, flanked by Bishops of opposite binding to those starting on the top level. Each pair of neighbouring-colour Kings share a FIDE-style direct orthogonal. 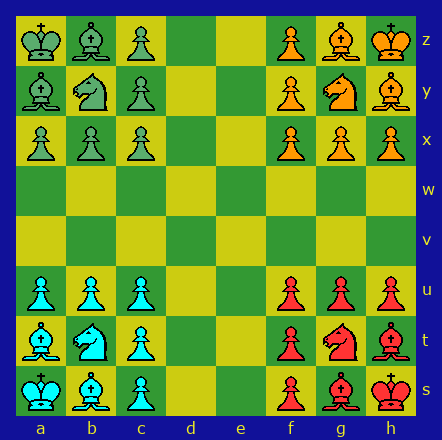 Level 3, at the bottom, has all the Rooks. 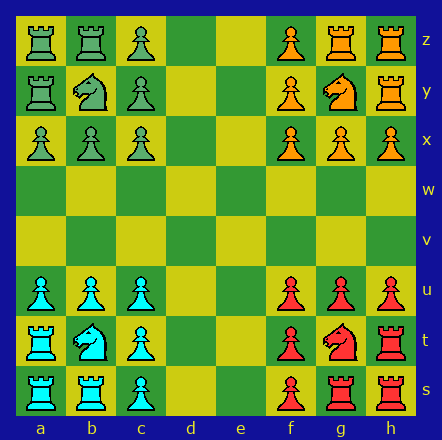 Each level has a leaping Knight diagonally adjoining the corner piece, and 5 Pawns aside holding everything back.

Level 1, at the top, has half each player's Ferzes and stepping Elephants, along with a Rook and stepping Knight each. 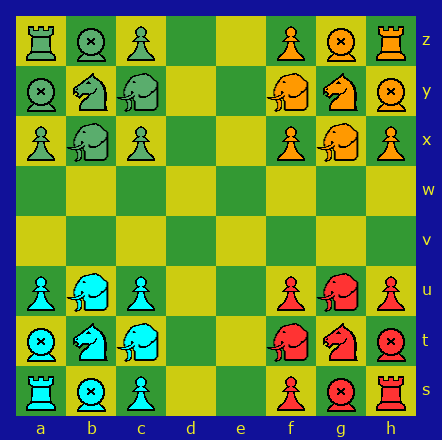 Level 2, in the middle, has each player's General in the corner, plus half the Rooks and Knights. 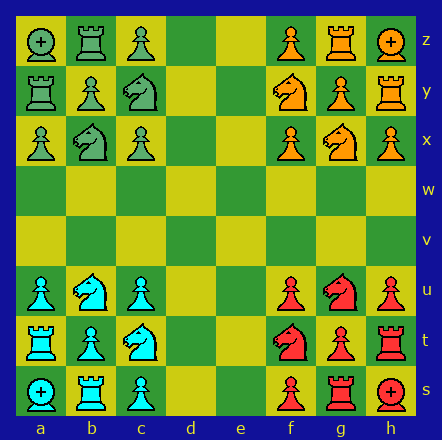 Level 3, at the bottom, has the same pieces as Level 1.

Each level has a Point (Pawn-Oriental) on each cell two columns radially from the corner column. The middle one has an extra Point.

Red moves first, and then play continues in anticlockwise order.

Pawns have an optional double-step noncapturing move along either horizontal orthogonal from the starting cell of any Pawn of the same army (including its own). Enemy Pawns (but no other pieces) can capture them En Passant as if they had made only the single step.

A Pawn reaching the far corner must be promoted as in FIDE Chess, subject to not exceeding one King or twice the FIDE number of anything else.

Elephants must remain in their own player's quarter of the board, confining each to the corners of a regular tetrahedron of cells. Generals and Ferzes cannot leave the corner column and the three radially adjacent columns - a Fortress first folded through 90ï¿½ and then given a fourth, wraparound set of three cells. A player may not make a move leaving two Generals sharing an orthogonal with no intervening piece. This lets a player move their General to trap any enemy's pieces between Generals, just as they can trap the only enemy player's pieces in 2-player XQ.

A player is Checkmated when their King or General is threatened by the player about to move. That player's pieces are removed from the game and the remaining players then alternate moves starting with the Checkmating one. A player can also win the main variant by getting a Pawn to a position where promotion is compulsory while having twice the FIDE number of everything else, even if 2 or all 3 enemies are uncheckmated.

What makes 3 FIDE boards so popular in 3d variants? My suspicion is some kind of subconscious equation made between 3 dimensions and 3 levels. This could be related to the popular shorthand "in another dimension" when what is meant is being separated along a spatial dimension other than the familiar three. Everything is of course in every dimension. Chessboards one above another reveal a good analogy in dimensions "other" than just 2. Every board is "in" the vertical dimension, it's just that they are differently placed along that dimension.

A subvariant of the main variant would be to allow promotion of symmetric pieces, when their player Checkmates another player, by the addition of a one-step move along any root-3 diagonal - King to EMPEROR, Queen to DIARCH, Bishop to MODERATOR, Knight to CAVALLANDER, and Rook to VICEREINE.