When I devised Guru Mahachaturanga and Guru Mahachaturaji, I used the same board for both variants. The 2-player game was intended to be similar to Grande Acedrex, while the 4-player game was designed to increase the piece density. The variant was devised as a 2d game using the Indian army from Armies of Faith 2 by analogy to the Jewish army being infulenced by Anglojewish Chess. No other armies suited 2d variants but I did devise Heathen Europe Chess for a cubic 3d board. This in turn prompted me to use a fuller Jewish army in the 3d variant Star of David 2 Level Chess. This prompted me to add a 2-level version of the game with 4 Indian armies, and here it is.

The Upper Level includes:
* the Red and Green Kings;
* the other players' Gurus;
* exactly half of each player's other pieces. 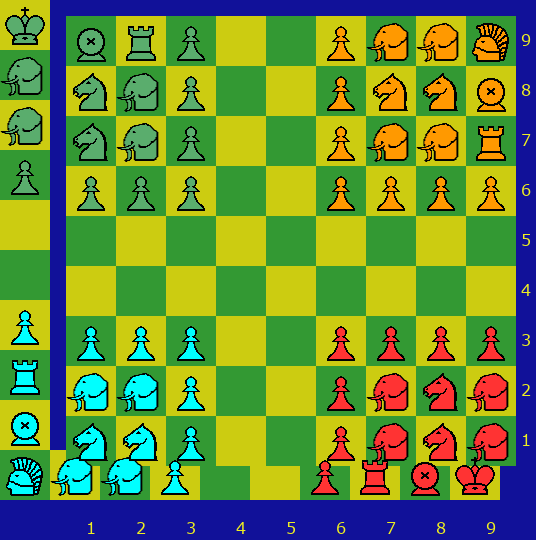 The Lower Level includes:
* the Red and Green Gurus;
* the other players' Kings;
* exactly half of each players' other pieces. 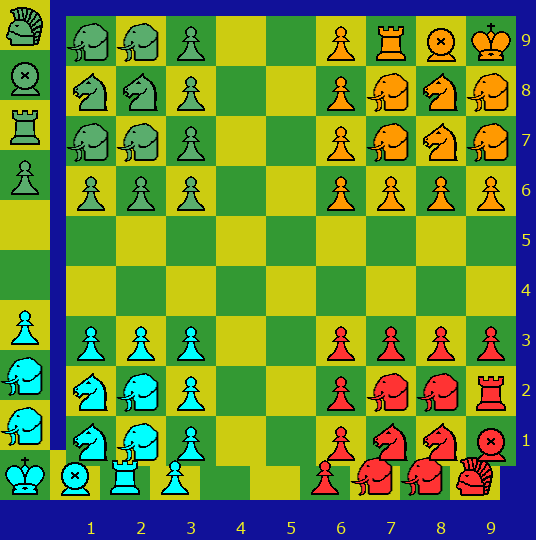 The pieces are the same as in AOF2, but interpreted for just 2 levels. Their promoted-by-Checkmate forms are their compounds with the Viceroy, which moves one step along any of the 8 root-3 diagonals.

An unpromoted Pawn must be promoted on reaching an all-enemy face. Promotion is to Guru in a corner column and to Rook, Knight, Elephant, and Ferz on successive columns along the face. Once promoted it cannot then be promoted further, except by delivering Checkmate.

A player who has promoted Pawns to Elephants on bindings where they had no array Elephants can carry out an Elephant Charge. This comprises two or more moves, capturing or noncapturing, in place of a single move. Each move must be a leap over one of their Elephants with another (necessarily still within one level) and none may start or end with any King in Check.

An Enlightened Move is an additional move available to a non-Pawn that is its own usual move away from (and notionally granted by) the same player's Guru. It may make any noncapturing move of the same length from the Guru to a different square. In the Rook's case there must be no piece between either it or its destination and the Guru. Note that the "same length" rule means that a piece making an Enlightened move starts and ends the move on the same colour square - a King cannot move from a square adjoining a Guru orthogonally to one doing so diagonally, or vice versa.

An alternative is to play as teams, with each player only capturing pieces whose King starts on the other level. In this case, should the first two Checkmates be delivered by the same team the player actually delivering the second one wins and the other survivor comes second.