When looking at 4-player variants I noticed how they seemed to enlarge the board excessively, making for exaggeratedly long Pawn treks. For FIDE Chess I devised a solution in the form of Fivequarters and Conference Chess. The narrow camps of these variants pushed Pawn ranks nearer the centre of the board without them colliding.

I soon noticed that I could apply the same principle to Shogi and Xiang Qi. As these variants in 2-player form have an extra file and one or more extra ranks, I enlarged the Fivequarters board's five components by a cell in each dimension. The resulting 125-cell board is considerable more than 5/4 of a Shogi or even Xiang Qi board but rather constitutes 5/4 of a notional 10 by 10 board. This inspires my choice of name for this family of games - take a board divided into hundredths, and use 125 such hundredths. Ironically I settled on a different and surprisingly slightly smaller board, though one designed on similar principles, for 4-player versions of 10-file 2-player variants.

In theory two FIDE and two Shogi armies could be mixed on a 100-square board made of five 5x4 rectangles - a sort of "Fivescore" Chess, but I suspect that the asymmetries between the two dimensions, and particularly between Pawn and Point Treks, would make it unworkable. In practice I have found a way to group a FIDE army, minus a Pawn, on five files, in a manner that I term Unhexed Chess from the way that it puts diagonal pieces in the centre in the Glinski/McCooey style. As you will see, any of the armies from that page can be used, and up to four different armies can be mixed and matched. 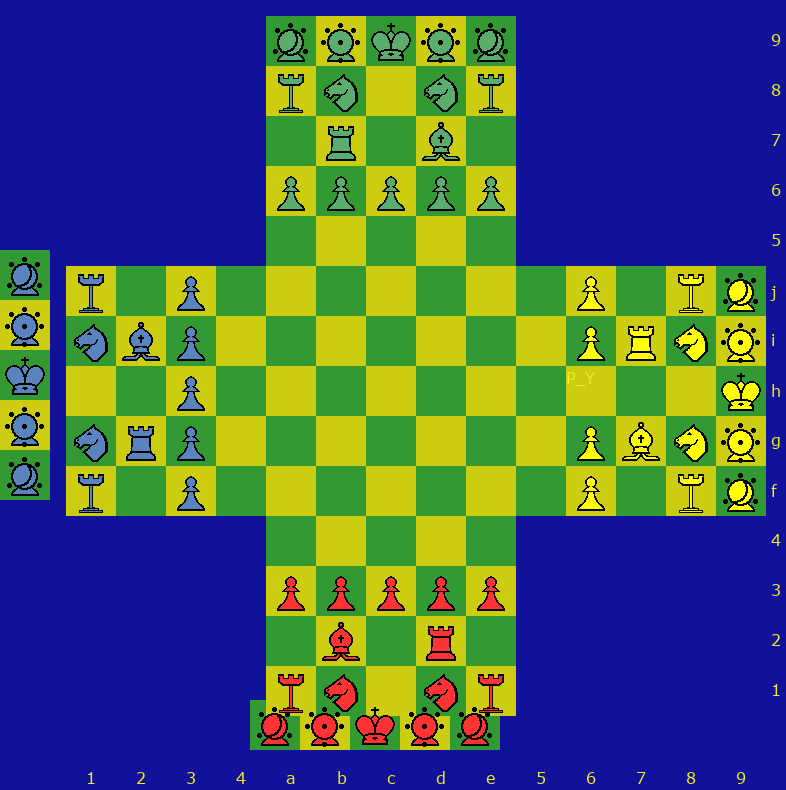 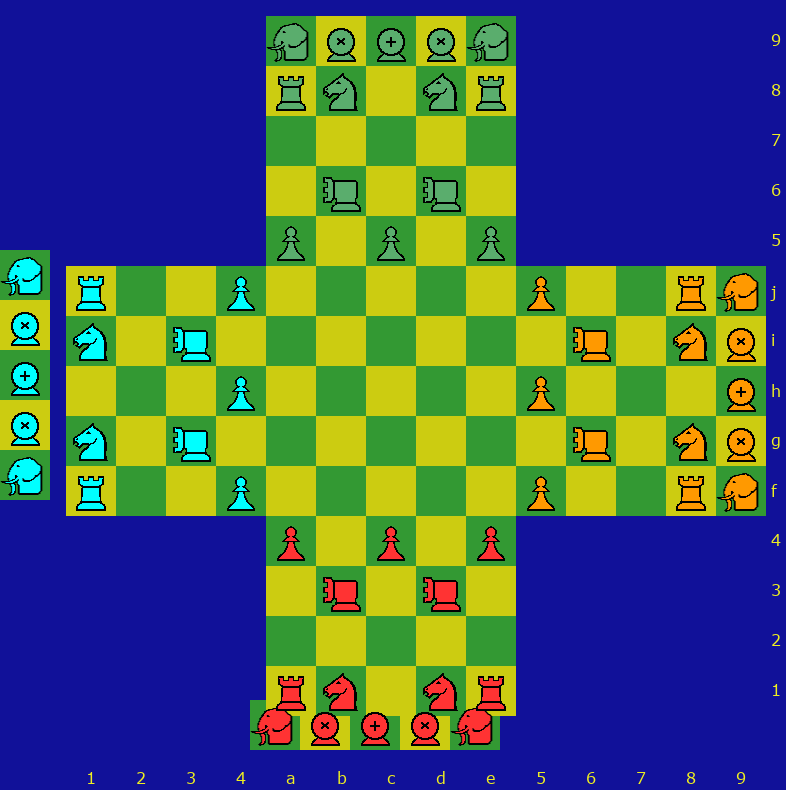 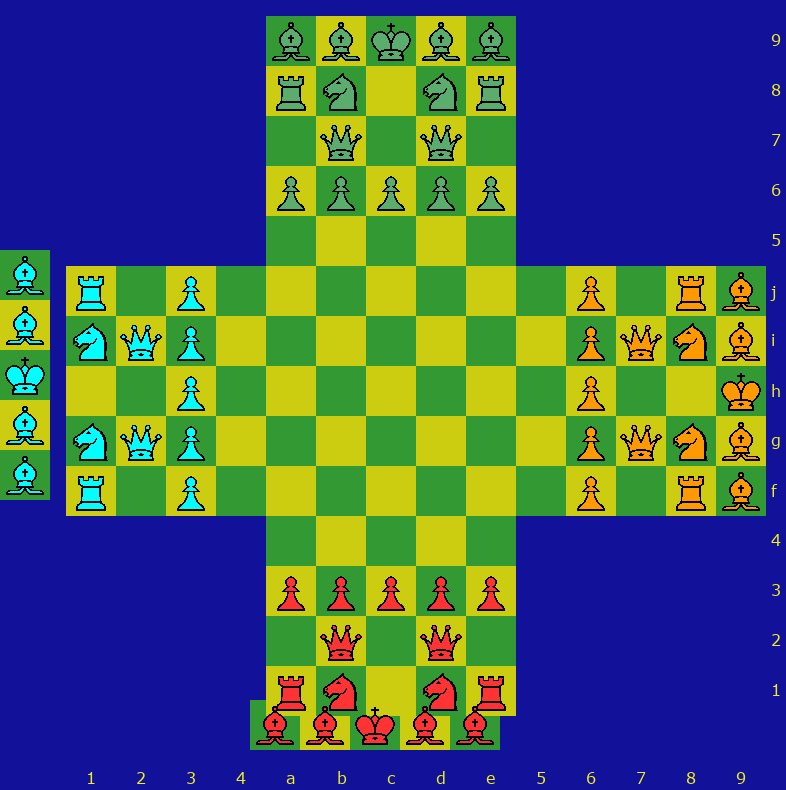 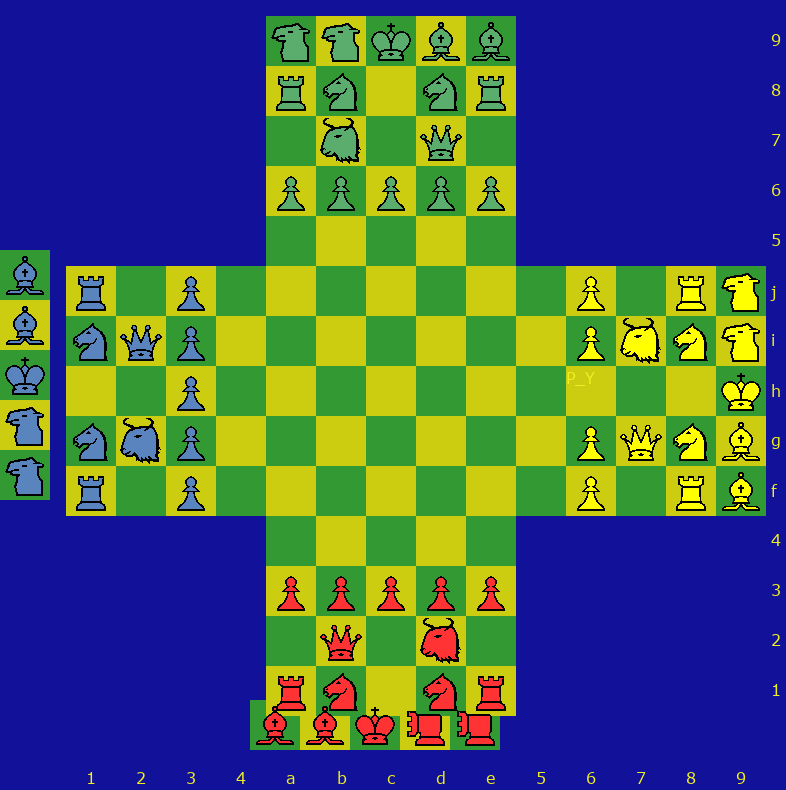 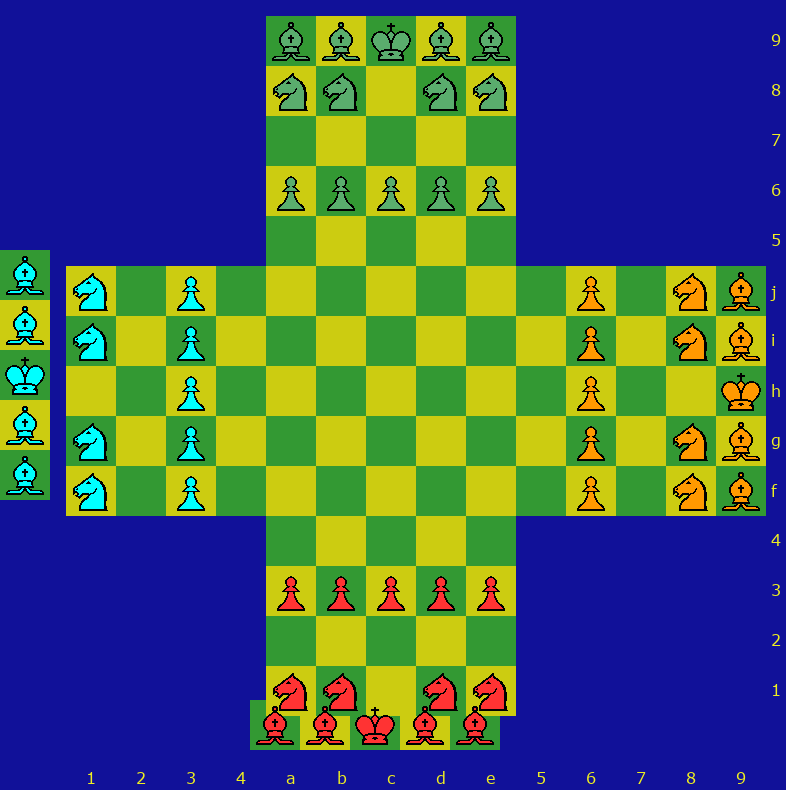 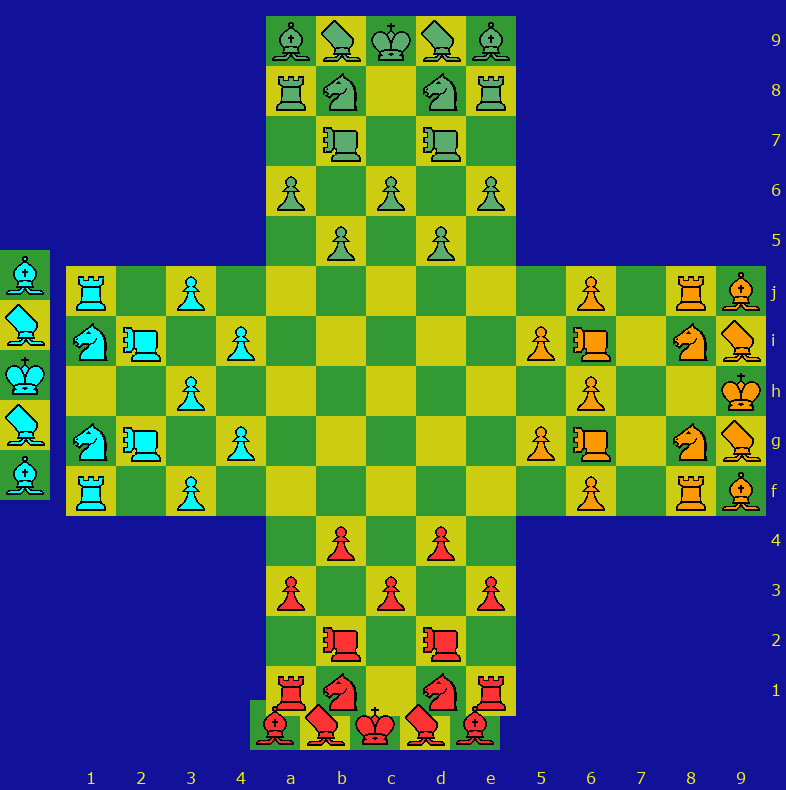 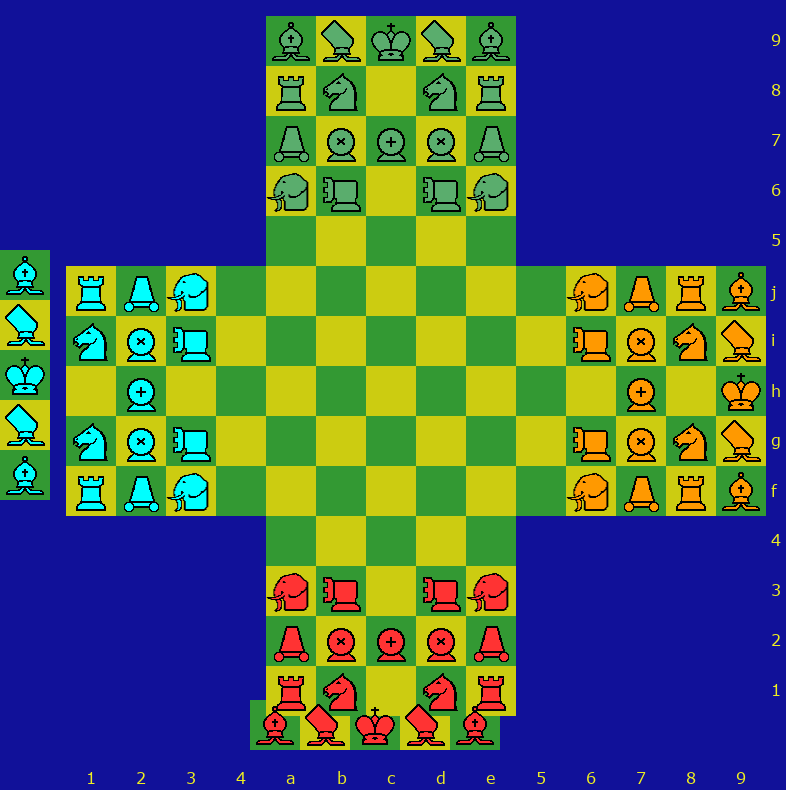 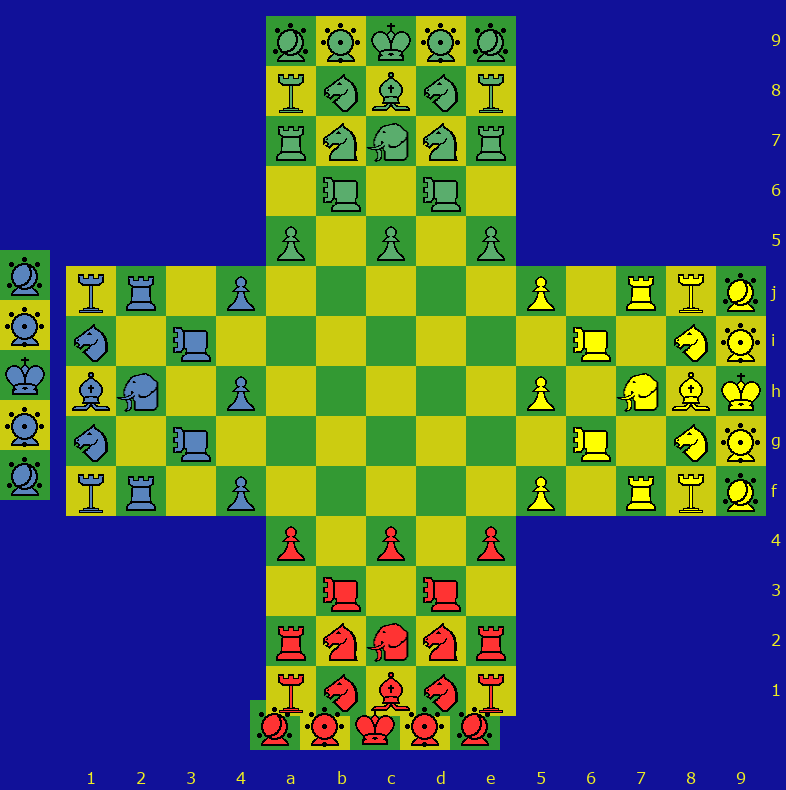 125% Yang Qi can be extrapolated to my Inquisitor Qi by adding extra moves to the pieces. Indeed the general pattern is extendable to more or less any 9-file variant. For variants whose pieces have just black nd white images, I show each player's quarter as viewed by that player. Here are two based on my Alibaba Qi and Totaishi Shogi.

Here are three based on my 4 Linepiece Fusion family, with Rex Exclusive fusion properties unbinding Bishops and/or Camels.

Here are two based on my variants Electrum Chess and Symgi.

The already 5-file camps of my Half Nearlydouble Chess, Unhexed Chess, and Ungrand Chess can be used without further modification.

Pieces are as in the corresponding 2-player variants. Forward is taken to be toward the opposite camp.

Play starts with Red and proceeds anticlockwise. No piece may move from one player's 5x5 section to another without passing through the central section. Thus a Bishop move could be c3-b4-af-4g-3h but not b3-a4-4f-3g. A 125 Xiang Qi/Janggi Stepping Knight can move a4-af-4g (though not vice versa), but a leaping piece cannot make a comparable move.

In variants with Pawns, Pawns have an optional initial double-step move, can be taken En Passant on the opposite player's next move, and are barred from leaving the set of 5 long orthogonals on which they start prior to promotion.

In -gi variants Red and Green can reintroduce captured pieces only on rightranks A-E, and Orange and Blue only on leftranks F-J, and file-sharing restrictions in 125% Shogi apply to those orthogonals for the same players. All pieces return in their unpromoted form, and on cells whence there is a valid unpromoted move. In 125% Shoxiang these rules apply to all pieces existing in Shogi except Rooks. In mixed variants these rules apply to the following pieces. Positional equivalence means that Pawns return as Points, Rooks and Knights minus Â¾ of their moves, Bishops as Silvers, Queens as Golds, Arrows and Cardinals as Bishops, and Cannons and Marshals as Rooks. Mobility equivalence means that pieces return with the same moves, but rotated for the new player's sense of "forward". Shoxiang's Rooks and non-Shogi pieces are treated as Xiang Qi, and its other pieces as Shogi.

Promotion is as in the respective 2-player variants, and is allowed in any possible enemy area. It is required there in 125% Xiang Qi and on running out of unpromoted moves in 125% Shogi. In 125% Taijitu Qi it involves a long-range piece moving to any enemy Fortress and promoting a short-range piece on home or neutral territory.

In 125% Xiang Qi and 125% Taijitu Qi each player has their own River which they are taken to control. Their two-step pieces can cross them at two notional Elephant Bridges. Thus 125% XQ Elephants can reach five cells on their own section and three - a different three for each army - in the centre. They cannot cross enemy Rivers. In both this and 125% Janggi pieces starting in the middle 3 cells of the back rank cannot leave their first three ranks or middle three files. A subvariant of each enlarges this Fortress to the whole area behind their own River. 125% Gnu Qi allows the King, Queen, and Gnu to cross their own River but not enemy ones, so that a King behind its River can Check an enemy King in the central area, and restricts how Bishops and Camels cross enemy Rivers.

125% Xiang Qi and 125% Janggi bar players not only from moves leaving their General facing the opposite one, but from moving a piece of their own to expose adjacent players' Generals to bare facing. Note that this lets a player move their General to trap pieces of any enemy between Generals, just as they can trap the only enemy player's pieces in the 2-player games.

In 125% Yang/Taijitu Qi the ing can be swapped with an adjacent piece common to both variants if neither is under threat in place of a normal move.

A player whose King or General is en prise to the player about to move is Checkmated and - because of the high piece density - their pieces, on the board and in their Reserve, removed from the game. The Checkmating player then makes their move and play proceeds with the remaining players. The first player Checkmated loses and the player delivering the last Checkmate wins. In a series of games the winner scores 3 and the rest 3 minus the number of other remaining players when they are Checkmated.

Pieces in non-mixed variants can be represented by two Shogi sets pointing in four different direction. The only problem is representing alternative promotions, particularly in 125% Wildebishogi.

A further development of 125% variants, heavily influenced by Flyover Xiang Qi in terms of having a file for every pair of players, is 150% variants. These dispense with the central section but have six outer ones, one file of each continuing on each other section as shown below. Note that any 5th-rank pieces are pulled back to the 4th rank to give empty ranks between players in the array.