These variants can be considered to be to my 6-file Pawnless Half versions of 10-or-more-file variants what 125% Shogi and 125% Xiang Qi are to Half Shogi and Half Xiang Qi. Where the Pawnless camp has only two ranks, Pawns are added in. The asnalogy is not a perfect one as the central 6x6 supersquare is not surrounded by four more the same size, and that arrangement would in any case be satisfactory as it would make the gap between camps too large compared to the original 2-players variants.

The name derives from the fact that the board can be seen as comprising 12 3x3 supersquares, and the sharp sign (#) forms the inner divides of such a supersquare, most famously in Noughts and Crosses. 12 sharp is also a phrase meaning 12 o'clock exactly, either midday or midnight. The sign has many names but at the time when |I was dfevising this variant the name sharp, originally from music, was regaining wider currency through the C-derived programming language C Sharp (C#).

The version that I first thought of, 12# Courier, was inspired by speculating what 4-player variant could use the maximum number of Hans Bodlaender's coloured images - a process also producing the corner-based 16 Seasons Chess. It was long in planning but I delayed posting until I had a page name with which I was happy. It inspired the earlier posting Half Courier, but restores half the Pawns. However in 2016 I began switching to a then new way of constructing virtual single images, and this has enabled me to revert to using the Wazir of my 2-player Courier variants. 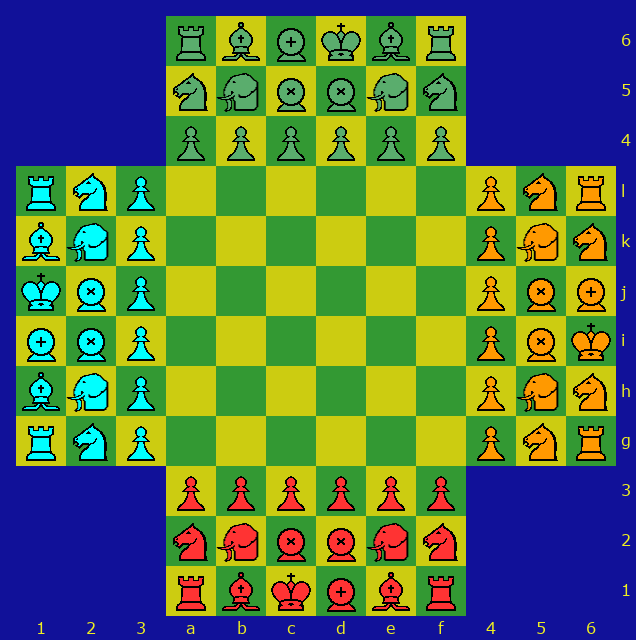 Other variants on the same board can be derived from my 6 by 10 Pawnless Half variants, again adding Pawns back in the 3rd rank where it is otherwise empty (12# Eurasian/Wildebeest/Rutland). Only 12# Timur requires further modification: swapping round Wazirs, Pickets, and Giraffes to give first rank ECDDCE, second RPGKPR, third NFWWFN. This reflects less closely Timur's original piece proportions, but is required to prevent Pickets being mutually En Prise.

Inspired by noticing that coloured inverted images are avaliable I have devised a 12# Shoxiang. This is based largely on Shogi-heavy Shoxiang 108. 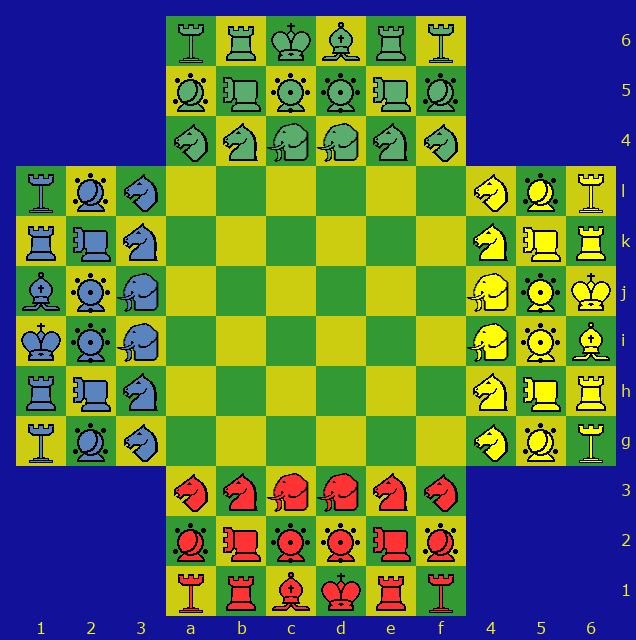 Finally a variant can be devised for all the various variants with the FIDE pieces plus the "missing" compounds. 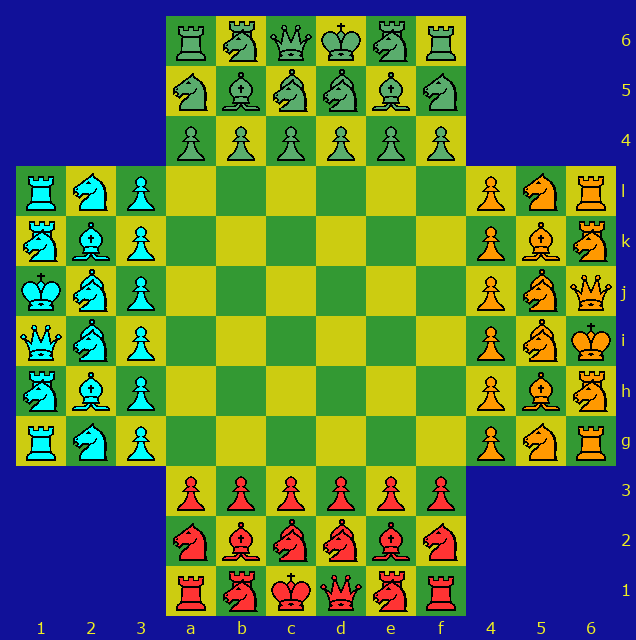 12# Courier uses FIDE pieces plus Wazir, Ferz, and leaping (through most squares) Elephant. 12# Shoxiang follows the Shoxiang rule of promotable Shogi Bishops but unpromotable XQ Rooks, with pieces in the same proportions as Shogi-heavy Shoxiang 108. Pieces in the rest are as in the corresponding 2-player variants, and (12# Timur apart) in the same proportions as the Pawnless Half variant. Pawns where present move toward the opposite camp.

Play starts with Red and proceeds anticlockwise. No piece may move from one player's camp to another without passing through one or more unoccupied squares of the central section. Thus a Bishop can move d1-c2-b3-ag-3h-2i-1j but no more than the first or second half of c1-b2-a3-3g-2h-1i. The halfway square of an Elephant move must have four orthogonally adjacent squares if empty, but also four diagonally adjacent ones if occupied - except in 12# Shoxiang, where it cannot be occupied at all. A Timur's Giraffe can move b3-ag-1g but not a3-3g-3j. Knights and Camels within a camp may move only within it or to the central 6x6 area.

Pawns, where present, are promoted as in the respective 2-player variants, but always on the player's 9th rank. This obviates the question of Pawns straying outside the files of the camp. Note that as 12# Timur needs no Pawns the issue of specialised promotion does not arise.

12# Mitregi pieces are promotable (Rook to Chatelaine, Bishop to Primate, Wing/Helm to Gold, Mitre/Hump to Silver), as are Shogi-derived 12# Shoxiang pieces (Bishop to Primate, Wing/Helm/Silver to Gold) at the end of any move starting or ending in an enemy camp. If they have no further move unpromoted, promotion is required. A capturing player may keep the piece that they capture in Reserve to reintroduce in their own army, unpromoted and not requiring immediate promotion, in place of a later move. These rules are derived from 125% Shogi

The King in 12# Eurasian, Elephants in 12# Shoxiang, and all compound pieces (Queen, Tank, Gnu) in 12# Wildeurasian, are barred from entering enemy camps. Different players' such pieces may however interact in the central 6x6 area. These rules are a cross between 125% Xiang Qi and Gnu Qi

In all variants, a player whose King is en prise to the player about to move is Checkmated and - because of the high piece density - their pieces, on the board and in their Reserve in 12# Mitregi and 12# Shoxiang, removed from the game. The Checkmating player then makes their move and play proceeds with the remaining players. The first player Checkmated loses and the last to survive wins.