This page is written by the game's inventor, Claude Lapointe.

A game of chess initially developed to address personal concerns about the rules has slowly evolved until it became a full variation of the game called “Chess 99”. The most obvious difference is that it is played on a 9x9 board, hence the name, and a new piece has been added, the “paladin”, named for a military leader in medieval times. The paladin combines the movement of the knight and the bishop which makes it the second most powerful piece of the game after the queen.

Some of the rules were also modified but by and large they were simply restored to their original form. It can then be said that while Chess 99 does retain, in one form or another, all of the more modern features of chess, it is essentially played by the ancient rules. 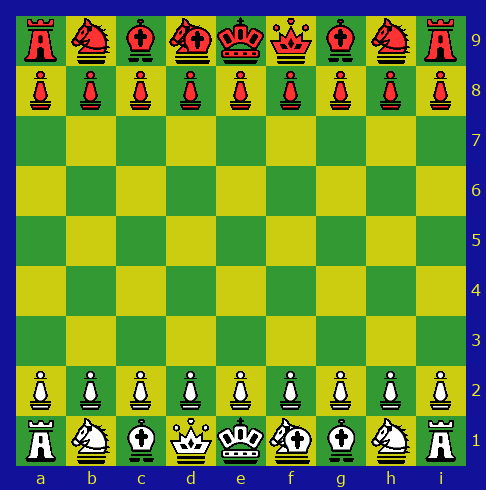 The basic movement of all main chess pieces are exactly the same. Only the movement of the pawn has been altered. Here are the differences:

Capture “en passant” is an important feature of the game:

To be perfectly clear as to the intent of this rule, whenever a pawn makes a two-square move, the opponent may push the said pawn back one square and proceed to capture it in the square where it now stands. There is never an exception to this rule. [Editor's note: This is a convention of over-the-board play that need not be followed in online play.]

Castling still exists in Chess 99 but in a much-simplified form:

Here are the basic rules of Chess 99 that differ from those of orthodox chess:

Rules for a draw:

In Chess 99, there is no threefold repetition rule and no fifty-move rule either. Players may always agree to a draw when neither one has enough material to force a capture or both players stand their ground and no progress is being made. Here are other reasons for a draw.

Both kings are in check!

Since it is permitted to leave one’s king in check, one can easily conceive of a situation where a player would capture the opponent’s king while their own king remains in check, or would become in check as result of the play. In such a situation, the player with the move may claim a draw.

Note: A player in an inferior position who becomes in check may well choose to answer by checking the opponent’s king. (The player who is a superior position – and expect to win the game – would probably not want to answer a check with a check of their own as the opponent would likely call a draw.)

Note: It would serve no purpose to carry on with a game when it has become obvious that no one has a realistic chance of winning by the 99th move. (The rule exists to force the termination of a game, but in practice it should rarely be invoked.)

A player who has lost every single one of their pieces and pawns may no longer claim victory. Should this player be in a position to capture the opponent’s king, they may claim a draw.

Note: One single remaining piece, even a simple pawn, would be sufficient to claim victory.

For a more detailed description of Chess 99, visit https://www.Chess99.net