Kevin Geiselman maintains a website for a game called Klin Zha. In John Ford's Star Trek novel The Final Reflection he intruces the Klingon board game of Klin Zha. A neighbor of Geiselman, Len Loyd, worked out playable rules for the game based on Ford's description and, in the years since, those rules have become `something of a standard among Star Trek and Klingon fans'. The Klingon's are an alien race that appear in the Star Trek television series, movies, books, etc.

Klin Zha is similar to Chess in that it is an abstract board game between two players. Moving pieces take opposing pieces in the same way as chess. The most notible difference, though, is that it is played on a triangular board with triangular spaces. Also, unlike chess, the initial setup of the pieces is not standardized, players may arrange their pieces in any manner they choose within their "point" of the board.

On the website, one can find the full rules for this games, several variants, remarks on Klingon culture and how this games fits into it, photo's of sets, sample games, strategic hints, etc.

Jean-Louis Cazaux sent a scan of the cover of the book where Klinzha first appears. You can currently buy this book in many bookshops. Below, you see a smaller version of the picture, you can also view the cover in larger detail (file of size 180K.) 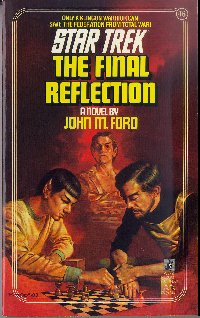 Larry Smith wrote the following about this book in an email of February 19, 1999:

The story deals with the story of Captain Krenn and the game is a recurring theme in his life. The scene on the cover of the book, however, is not a game of klin-zha in progress but one of standard chess - which Krenn thinks of as "the earther klin-zha" - which Krenn played for the first time when he met a very young Mr. Spock while he was visiting Earth in a diplomatic capacity. The game described in the book was standard chess, not the 3-d chess varient made famous in the TV series.

Klin-zha is interesting because UNlike chess, the many many varients are accorded the full respect of the grandmasters of the game. Each varient reflects some different interpretation of the game's relevance to the "real" world. It would be as if Karpov was expected to be a master of a half-a-dozen varients of chess instead of one standard game.

This `link page' is meant to provide a link to another website. Note that I have no connection to, or bear responsibility for the linked sites. Text based on emails of Kevin Geiselman and Larry Smith, with some sentences changed/added by Hans Bodlaender. Scan of bookcover sent by Jean-Louis Cazaux. WWW page created: August 26, 1998. Last modified: December 13, 2002. ﻿