Invented circa 1815 by a councillor in Berlin by the name of Peguilhen, this game, as well as a slightly smaller version, were first described in 1819 in the first volume of Archiv der Spiele. Although the author of this work was anonymous, he writes that he did personally meet with Peguilhen, and that these games were created a few years previous. It was later described by Ludwig Tressan of Leipzig in his 1840 work Das Schachspiel, siene Gattungen und Abarten, (The Game of Chess, its Types and Varieties), which may be the first book ever devoted entirely to chess variants.

The game is played on an 11 by 11 board with light colored squares in all four corners. In addition to the usual Chess pieces, each player has a Marshall, a Commander, an Adjudant, and three extra Pawns. The game starts with the following opening setup. Notice the Knights and Bishops are reversed on one side so that both Bishops are not on the same color. 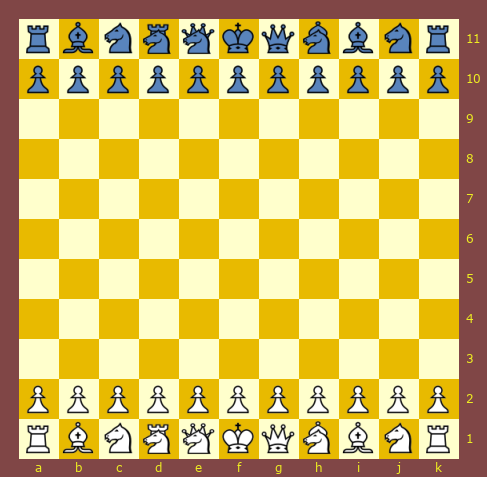 The Marshall has the combined moves of Rook and Knight.

The Adjudant has the combined moves of Bishop and Knight.

The Commander has the combined moves of Queen and Knight (thus, it can move as Rook, Bishop, or Knight).

Pawns may make a double or triple step for their first move, so a white Pawn on e2 can move to e3, e4, or e5 (or capture at d3 or f3). At each squares passed over, the Pawn can be taken en passant. Pawns can promote to Commander, Queen, Adjudant, Marshall, Rook, Knight, or Bishop, but only to a piece that has been previously captured.

A player can castle under the same conditions as orthodox chess. When castling, both the rook and the king move four squares in each others directions (thus rook and king do not end up at adjacent positions after castling.)

Other rules are as in orthodox chess.

An earlier version of this page was based on that text. It has now been updated with new information from A World of Chess, by Jean-Louis Cazaux and Rick Knowlton. The invention of this game was previously attributed to L. Tressan of Leipzig. Tressan published a book describing it, but did not invent it.