Roman Chess was a commercial chess variant released in 1999, but is no longer in production. It expands orthodox chess to a 10-by-10 board and adds two Archers per side - pieces that move like Kings but are not royal.

The only new piece that Roman Chess adds is called the Archer. It moves like a King, but is not royal, so attacking one is not considered a check. This piece has been used in chess variants for hundreds of years and is often called a Man, General, Commoner, or Guard.

The rules of orthodox Chess apply with only two excpetions: Kings move three spaces toward the Rooks when castling and Pawns get the additional option to promote to an Archer. An unmoved Pawn can still only move two spaces (subject to En Passant.)

Roman Chess was not commercially successful. The website is no longer online, but an archived version can be seen here.

Calling the new piece an Archer, considering its short-range move, was an unusual choice. Given the Roman theme, Centurion would have been a more appropriate name.

Below are a few photographs of the commercial set, which used to retail for $69.95. 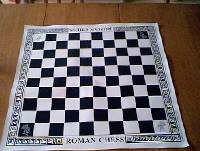 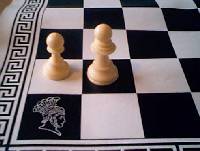 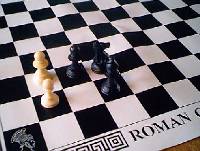 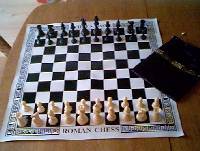 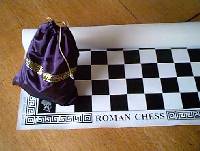 If you have Zillions of Games installed on your computer, you can play this game with this ZRF file.