The construction of this variant's name explains its nature. MITREGI is my family of Shogi variants adding a diagonal forward-only (FO) linepiece, to go with standard Shogi's orthogonal one. For English usage I termed the new piece the Mitre, as an attribute of the Bishop which is the usual English name of the symmetric diagonal linepiece. TOYANG refers to my idea, pioneered in Toyang Gnuqi Mitregi (TGM), of adapting Mitregi armies for use on a larger board by removing short-range pieces, substituting larger numbers of longer-range ones, and promoting FO ones to Hopping pieces occurring in Yang Qi but not in Shogi or non-Toyang Mitregi. YONIN refers to a four-player array in which each army starts in a triangle sticking out from a side of the board.

I simplify Toyang rules relative to TGM. Like Shogi and Mitregi 90 the original array has no Queens, Princesses, Gnus, Handymen, Knights, Camels, or Humps. This automatically eliminates the Tank as a promotee, but I also eliminate the Stewardess and make the Knight the promoted form of both Helm and Pawn. Using Pawns at all follows TGM practice, as a mixture of Points and Crosses seems unsuited when the total front row of pieces numbers only nine among Nearlydouble numbers of other pieces. The game can be played with four Shogi sets, minus the Golds and half the Kings/Points, using remaining Points for Pawns and Silvers for Mitres. This array was strongly influenced by Hans Bodlaender's limited range of coloured images, but since then an array builder with a wider range of coloured pieces has been created. For this reason - and sepecially as it includes coloured images to represent FO pieces, I have added a second array based on Mitregi 144 and with the original Toyang promotion rules.

Array based on Mitregi 90: 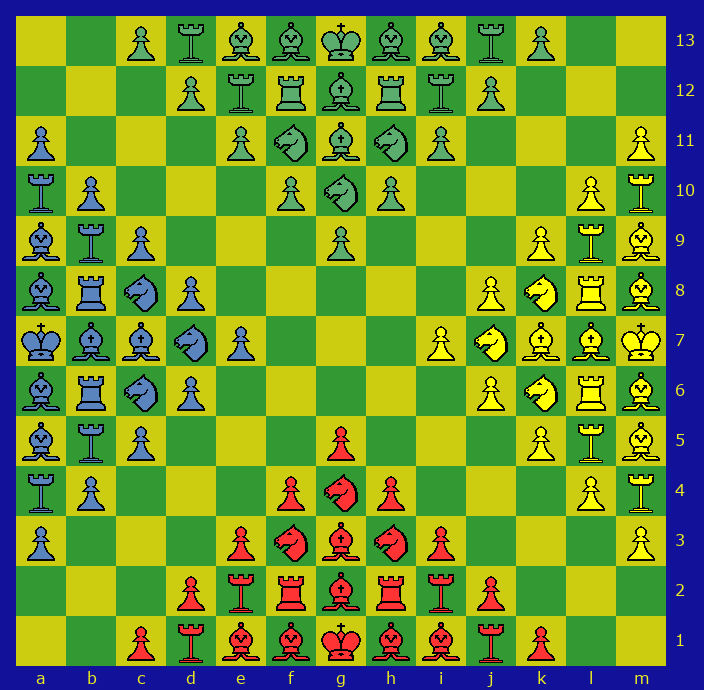 Array based on Mitregi 144: 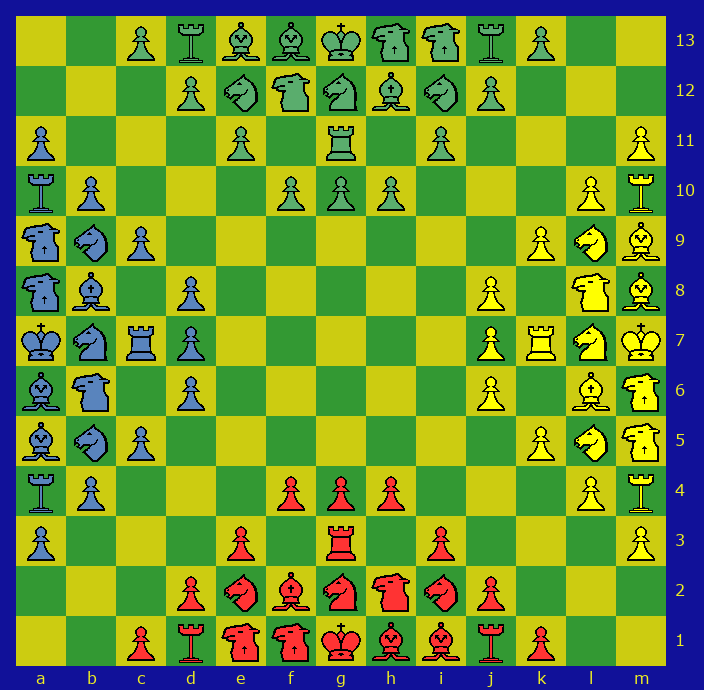 Note that what are ranks for two players are files for the other two and vice versa.

The following pieces move one step:

A Pawn on any Pawn starting square of its camp may make a double-step noncapturing move, regardless of whether it has already made one or more capturing moves to get there. It may however be immediately captured En Passant by an enemy Pawn poised to capture it had it moved only a single step.

Promotion is allowed on reaching or crossing the diagonal connecting the opposite player's King square to either adjacent player's King square. This is based on an idea of making the promotion zone parallel to the front of the camp, as in Glinski's and McCooey's hex games. The way that capturing outward brings a Pawn two steps closer to promotion instead of the usual one further echoes McCooey, and the way that capturing inward brings a Pawn no closer to promotion further echoes Glinski. A forward-only piece reaching a cell from which it has no further move unpromoted must be promoted.

A player capturing an enemy piece can, in place of a normal move, reintroduce it as part of their army, in unpromoted form. FO pieces cannot be reintroduced on the rank where promotion would be required.

A player is Checkmated when their King is threatened by the player about to move. That player's pieces are removed from the game - not even put into reserve but removed altogether. This is because the array piece density of 100/169 is so high and with pieces returning from normal capture it doesn't drop much otherwise. The remaining players alternate moves starting with the Checkmating one. The last player not Checkmated wins.