This page is written by the game's inventor, Erik Lerouge.

Wildebeest Decimal Chess is a variation on the 1987 R. Wayne Schmittberger famous Wildebeest Chess, notable for complementing the piece set by the Camel, which can be see as the diagonal counterpart of the Knight, and the Wildebeest which combines both leapers’ possibilities, thus balancing the number of the sliders and the leapers. The present variant consists in an adaptation of the Schmittberger game to a more conventional 10 by 10 board, placing the Pawns on the third row, as many decimal variants do, and arranging the pieces in a more symmetric array.

To whom already knows Wildebeest Chess, this variant can be simply described by mentioning its differences with the original Wildebeest variant:
• a 10×10 board, ten Pawns and a different setup;
• Pawns have a two-step only initial option;
• free castling possibilities are adapted to the new setup and extended to the Rook's starting square. 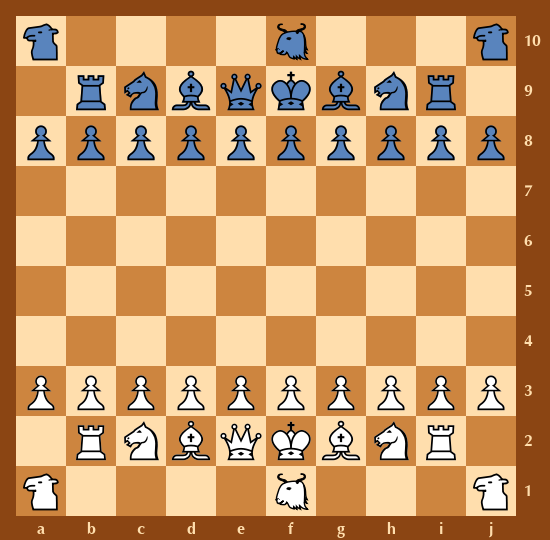 Pawns fill each player's 3rd row. The orthodox pieces are placed on the eight central squares of their 2nd row, in the same order as in FIDE chess (R-N-B-Q-K-B-N-R), with mirror symmetry between the enemy armies (Kings are on the same column). Camels are placed on the corner squares, and the Wildebeest on the square which is just behind the King’s starting square.

All rules of orthodox chess apply unless otherwise stated.

Rooks, Knights, Bishops, Queen, King and Pawns move as in orthodox chess. Pawns have a two-step initial option and the possibility of en passant capture.

The Camel moves three squares orthogonally then one square in a perpendicular direction, leaping over intervening pieces.

The Wildebeest combines the possibilities of the Knight and the Camel: it can move two or three squares orthogonally then one square in a perpendicular direction, leaping over intervening pieces.

When reaching the last opposite rank, a Pawn must promote to a Queen or a Wildebeest.

End of the game: a player wins by checkmating or by stalemating his opponent. Other drawing conditions apply.

Adapting Wildebeest Chess for the decimal board makes subtle differences. This slightly increases the average piece density (40% to 42% initial density), while reducing the surface by about 9%. These differences give more power to the leapers, making them more balanced comparatively to the sliders. The Knight becomes a bit stronger, and slightly superior to the Camel, which is the weakest piece. Given the value of both leapers on the decimal board compared to the relative piece value on the 11×10 board, the Wildebeest, which can, with its King, win against a lone King by stalemate, could be about worth 2 Pawns more than a Rook. Since most pieces are concentrated on the 8×8 central zone, due to the advanced initial position, the beginning and middle game can be very cramped in that zone. But the outer ranks and files assure a greater scope to the attacks, and could slightly favour offence over defence.

Furthermore, the new array removes the first move mate threat of the original variant (1. Wf4, Wh4 or Ch4). Added to the fact that there is no Pawn defended only by the King on the initial position, and the possibility of the King to escape on the first row, this could certainly reduce the first move advantage.

The free castling rule has been adapted to the new array, and its possibilities extended up to the Rook’s starting square, permitting the King, with the furthermost castling position, to defend the edge Pawn. Since the castling is less necessary here, due to the possible moves of the King and Rooks in their initial position, it is possible to play a minimal variant of Wildebeest Decimal Chess without castling; players can agree to play in that manner.