This page is written by the game's inventor, Joost Brugh.

Sudoku War is a war in a Sudoku. The numbers in a Sudoku are waging a civil war for the total domination of the Sudoku. Both White and Black numbers hired forces from a distant planet to join the forces. 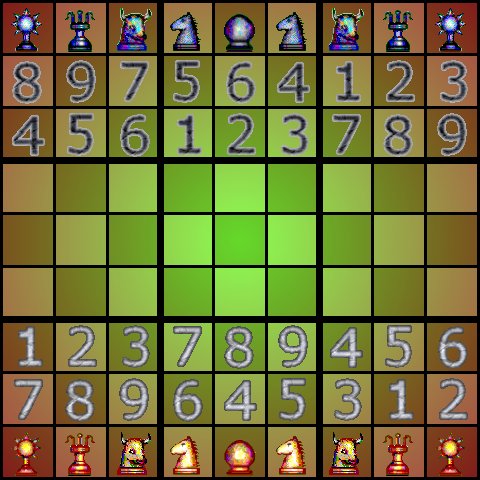 The numbers in the diagram are Sudoku native numbers. They are the native inhabitants of the Sudoku. The first line is filled with hired pieces. Those are (from corners to center) two Stars, two Correctors, two Leaps, two Knights and one Immobilizer.

The Sudoku numbers move like a King. They can only move so that the Sudoku stays legal. They can capture anything.
The Star moves like a Rook. It can also jump to any position in the same region. It can't capture pieces. It can suicide capture enemy numbers. An enemy number can be captured if you can move your Star to that position. The capture is executed by removing both the target number and the capturing Star.
The Corrector moves like a Rook without capturing. When a friendly number is orthogonally adjacent to your Corrector, you may replace the number with any other number as long as the Sudoku stays legal. There is no limit for how many copies of a certain number a player can have.
The Leap moves like a Queen without capturing. A friendly number adjacent to a Leap may move as though as it moves from the Leap's position (except for the move back to the starting position). When both your Leaps are adjacent, you may use both Leaps in one turn even if the second Leap is not adjacent to the number's starting position. The move is legal even if a used Leap is in a position that is inaccessible for the number because of Sudoku rules. Only the final destination position must be legal.
The Knight moves like a Knight. It can capture enemy pieces, no numbers.
The Immobilizer moves like a King without capturing. It immobilizes adjacent enemy numbers. It doesn't immobilize pieces. An immobilized number cannot commit suicide.

When executing moves, you must obey Sudoku rules. It means that the moves mustn't make the Sudoku illegal. The Sudoku rules are that no same numbers may be on the same file, rank or region. Non-number pieces play no role for this rule. "Same numbers" means that the value is the same. It doesn't matter who's numbers they are. There is no "During move"-rule. You may use Leaps that are on inaccessible positions (See Leap) and it is perfectly legal to capture an enemy same number with a number.

There is no King, Castling, Pawn, Promotion, En Passent, Initial Double Step or anything like that.

The Sudoku rule adds a new dimensions. If a piece or number is attacked by a number, it can be protected by a number with the Sudoku rules. You can use Leaps to jump over illegal lines, use Correctors to add or neutralize restrictions for attack or defence. You can use a Star to eliminate a key defender or to defend the back rank. An Immobilizer can only be captured by Knights or by numbers using Leaps. It can be under attack if it is a Knight's move away from a Knight or a King's move away from a Leap. Watch out when trading or losing your last Knight. Enemy pieces may grow powerful.