This is the 169-cell variant that I mentioned having trouble with on the Long Yang page. It has much in common with Long Yang, in that applies the Nearlydouble principle to Yang Qi. The board, however, differs in number of both ranks and files, and so warrants its own page.

As I said, 13Â² would have the advantage of accommodating all the Rooks, Bishops, and Arrows on the back rank - an advantage not applying to Knights due to the effect of a large board on those anyway and need to strengthen them. With no River, the odd number of ranks does not matter unduly. I finally managed to deal with Pawns in a manner evolving smoothly from my arrrangement of the second rank. Having front and back Pawns every three files starting at the end ones instead of, as Long Yang and Yang Qi have them, every two, and middle Pawns on the rest, gave 2x5+8=18 Pawns, the upper limit for a Nearlydouble of a 9-Pawn variant.

That just left the matter of a name. What I noted about this variant was that, relative to Long Yang, there was an extra piece aside on a smaller board. This made for a more concentrated strength. The balance of dimensions also suggested someone being big because of a strong build as against mere height. So I decided to keep up the end-of-word alliteration with Strong Yang. 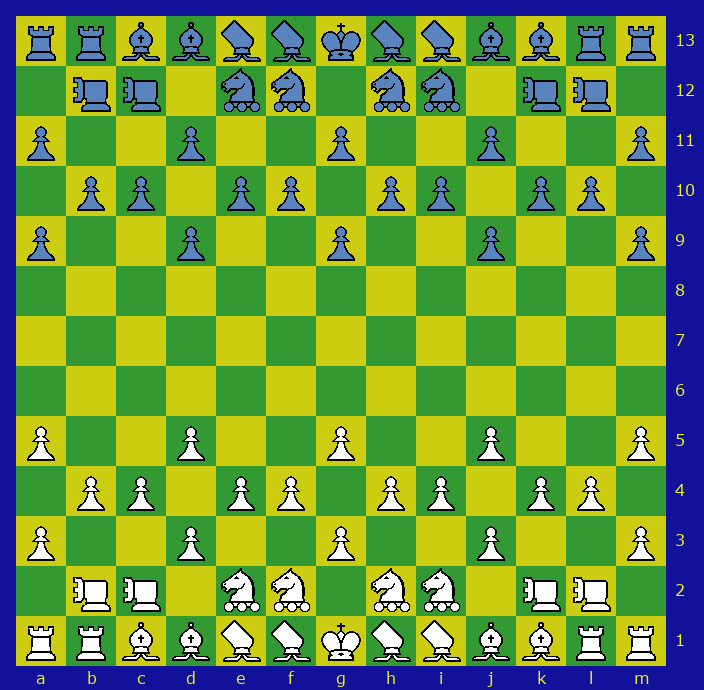 Just as Yang Qi can be played with a Shogi set (a Xiang Qi set has too sparse a front rank), matching piece for piece (except with Shogi's Rook and Bishop representing a single piece type), so Long Yang can be played with most of two Shogi sets. It can also be played with two identical FIDE sets, with each piece as itself, plus two Pawns and the non-Pawns of a smaller FIDE set, with for example its King/Queen/Rooks as Cannons and Bishops/Knights as Arrows.