Many hexagonal variants are adaptable for two or three players, but what about six? Clearly the most familiar variants on the 91-cell hex board cannot just have players added - Wellisch as each camp includes an entire edge and Glinski and McCooey as each camp uses mor ethan half of two edges. McCooey could go 6-player if the hexagon went to sides of length 9, but that would make for a board of over 200 cells. Nor would a hexagonal board with a hole in the middle work well as it would block pieces whose only noncapturing move is straight forward, be they Glinski's Migrants or McCooey's Brokers. This is the reason why my Ringworld Chess does not use forward-only pieces.

There is however a way to cram camps into small spaces that I have already used. While my Anglojewish Chess used the Glinski and McCooey arrays with modified pieces, its theme gave rise to my hex-prism variant Star of David 2 Level Chess and subsequently my 2d hex variant Flatstar. The stelliform board of the last could, suitably enlarged, have a camp at each corner.

Having one player look in from each corner of the star makes for a Wellisch orientation, so I decided to make the forward-only pieces Points throughout and use either armies based on Wellisch-orientation games or revergent (a term that I coined in Compact Hex Chess) versions of Glinski-orientation ones. For two I decided to start with thirteen pieces aside, of which the five bordering non-camp cells are Points, and therefore eight symmetric pieces. For a more Shogi-like one I used armies of fifteen pieces of which only four are Points.

Each player's radials are two forward, two sideways, and two backward orthogonals and one straight forward, two half-forward, two half-backward, and one straight backward hex diagonal. Each pair of opposite-colour players have seventeen ranks. The first and seventeenth are single cells, the fifth and thirteenth are the widest, and the ninth alone starts empty. There are options fort coloured images in the latest array diagram generator, but not for hex-specific pieces. A lesser variant designer might compromise by substituting images of square-cell analogues, but this would be inconsistent not only with my other variants but internally as Messrs. Wellisch, Glinsky, and McCooey followed different analogies. I instead resort to alternating Black and White annd ask that the reader merely imagine six colours. 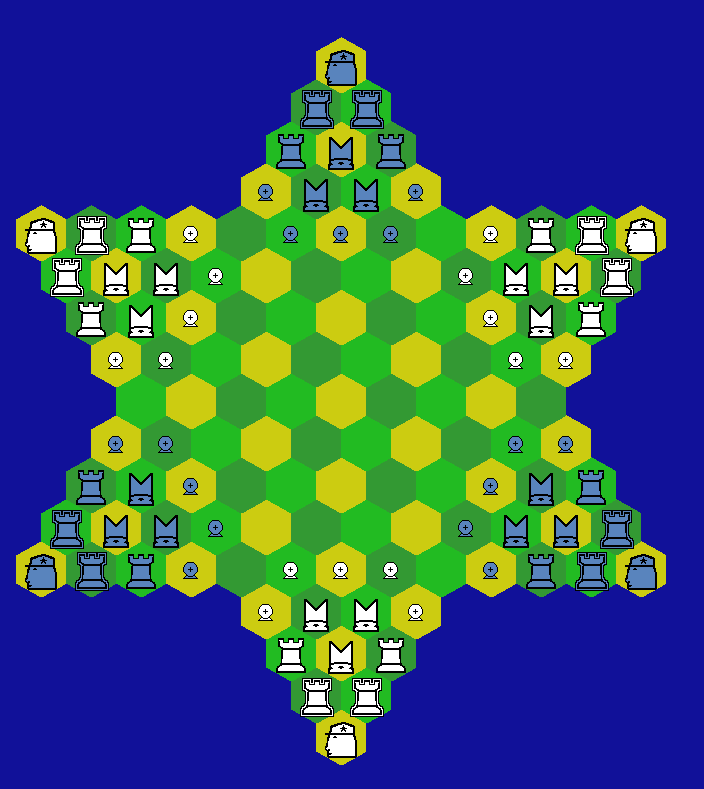 STELLICORN is a Stelliform game with Unicorns, using a revergent version of the Glinski/McCooey army. As I can see no easy way to include the Duchess I omit it and have just the Grandduke and simple pieces in the array, but allow promotion to Duchess. I decided against fusion or promotion to all compounds as Rook+Sennight=Seaseholder and Unicorn+Sennight=Seprechaun, as well as having derived names, looked like being too strong on so cramped a board. 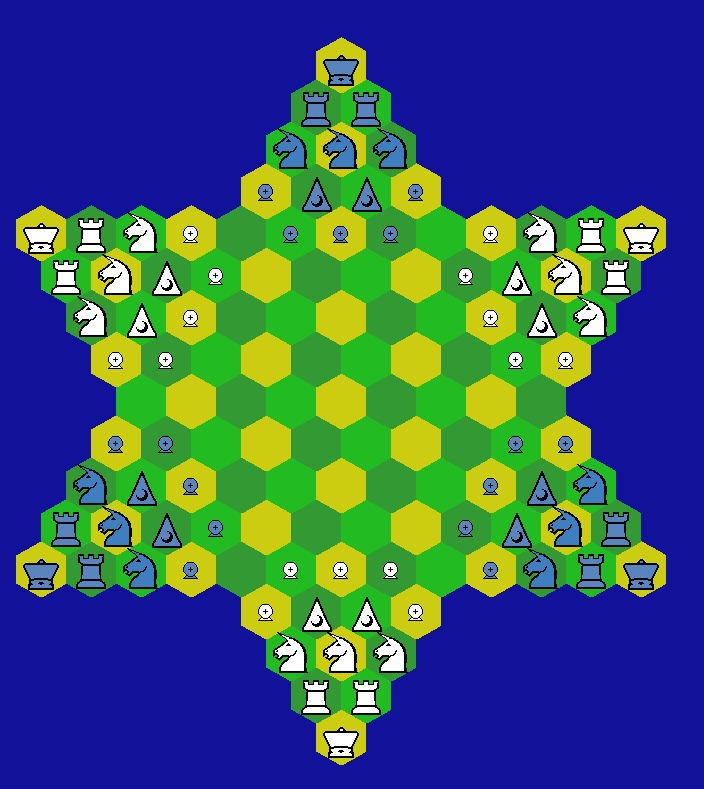 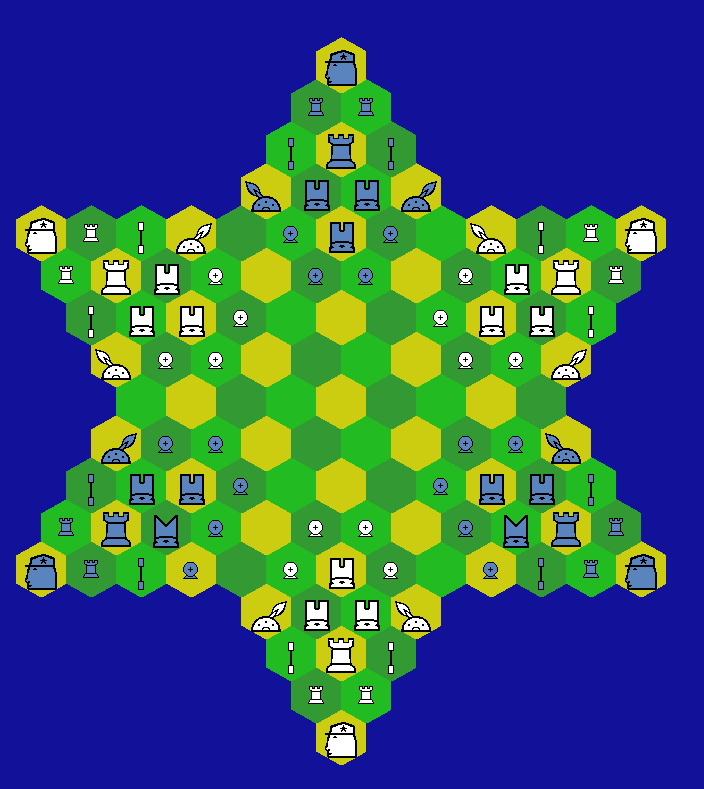 STELLIU YANG is a Stelliform revergent version of Liu Yang. The camps are too cramped to have more than one aside of each unbound piece. 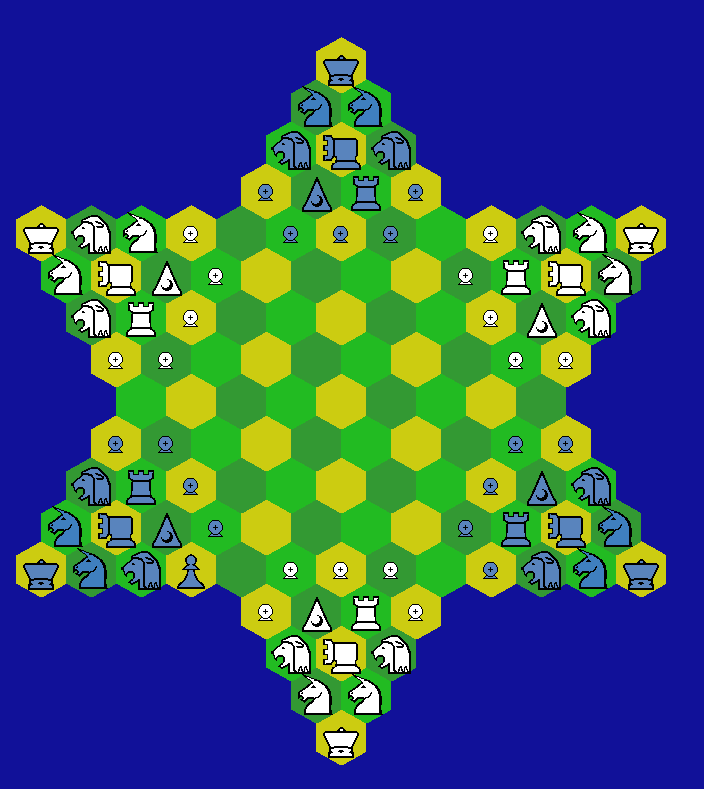 HEX FIANCÃ‰ CHESS is a variant with just three players, but suits this geometry especially well. Below I show the camps for two players, and hopefully the third can be extrapolated from them. 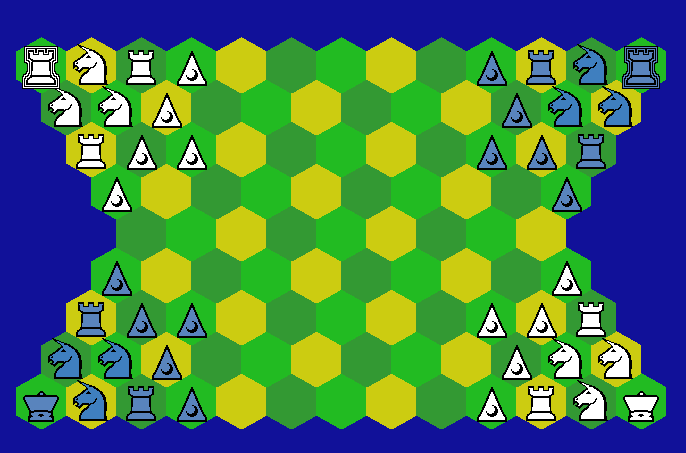 You can also have a Stelliform 6-player Hex Orthogonal Draughts, filling Stellgi's 15-cell camps with Twice-Pawns to give nearly the 75% piece density of standard Draughts.

Â¹ alternating between left and right

A Sennight leap, or a single step of a diagonal move, cannot be made direct from one ten-cell corner section to another. A complete diagonal move can, but only if it passes through the central 61-cell hexagon en route.

Points starting on the 4th rank, or in Stellgi the 5th, have an optional double-step noncapturing first move.

In Stellgi a player capturing another's piece puts it into a Reserve, and can reintroduce it as one of their own pieces in place of a normal move. Dexters and Sinisters can return in either form (like certain Symgi pieces) but the rest must return unpromoted and able to move in that form.

In Stelliu Yang the Grandduke, if not in Check, can swap places with an adjacent piece of its own army, other than a Broker, in place of a normal move. This is how Unicorns and Slings get to move from one binding to another. This is analogous to the YQ King Swap. An oddity is that on the hex board pieces can be adjacent only on the orthogonals.

Promotable pieces can be promoted on entering, moving within, or leaving the area from the player's eleventh rank onward. A piece with no further move unpromoted must be promoted.

A player is Checkmated when their General or Grandduke is threatened by the player about to move. The Checkmated player's pieces, both on the board and in Reserve, are removed from the game. As with my 4-player Shogi variant, this is because the variant has a greater density of pieces - and except perhaps in Stellgi of long-range pieces - than either 2-player Shogi or Yonin Shogi. It also gives an incentive to postpone Checkmating the first player in the hope of that player capturing more pieces. In Hex FiancÃ© Chess a player who still has their Duchess can also win by bringing their Grandduke and Duchess to orthogonally or diagonally adjacent cells without being in Check.