(c) 2005 by Gary K. Gifford Origin: I thought of this game in November 2005 while concluding a challenging game of Shatranj. In addition to having a Shatranj character it employs the Shogi drop concept as well as the concept of the Trojan Horse (similar to the one I used in Catapults of Troy). This Trojan Horse holds 6 pieces. Object of the Game: Checkmate your opponentâ€™s King. You can also win by forcing resignation. 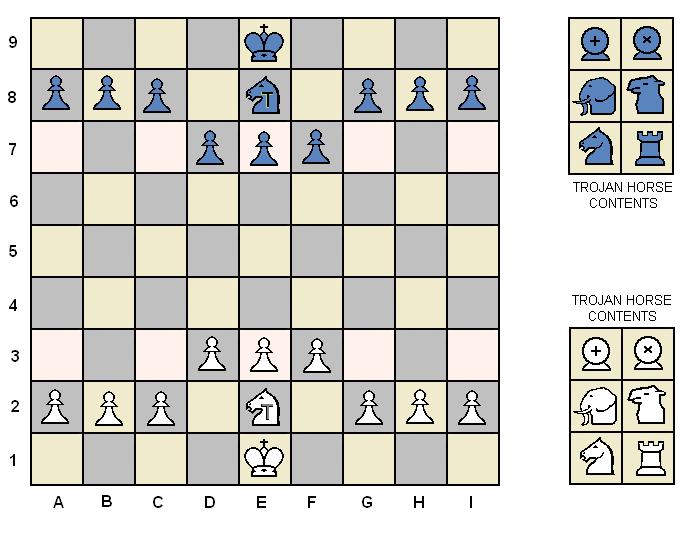 Initial Setup: The initial setup is indicated above. Aside from 9 pawns, each player has his King and Trojan Horse (loaded with a cargo of six pieces). 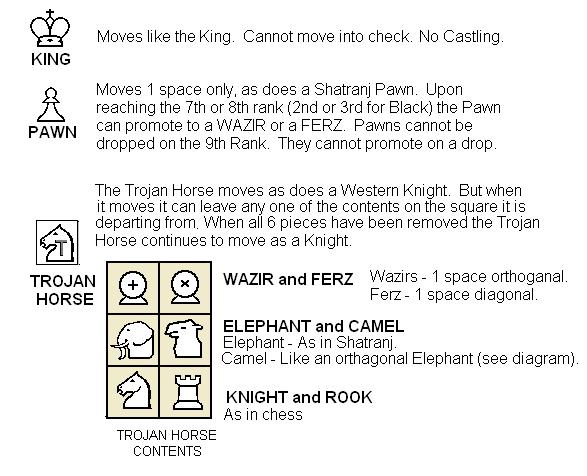 The CAMEL is not found in classical Shatranj. Here it is based on the Elephant, but moves horizontally or vertically. Like the Elephant, it captures by displacing the captured piece. A comment by Charles Gilman pointed out that this Camel is moving like a Dabbabah. See Note 1 below for additional information regarding the Dabbabah and why I used a Camel. 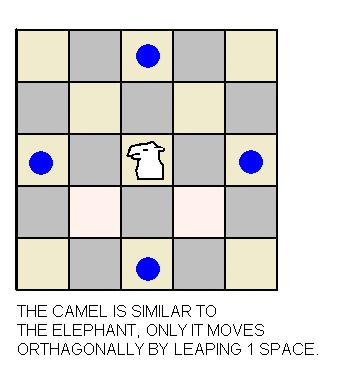 The WAZIR is not found in classical Shatranj. It is based on the Ferz (Counselor), but moves horizontally or vertically 1 space. 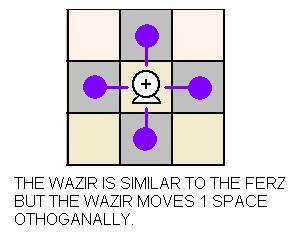 A Brief example of an Opening 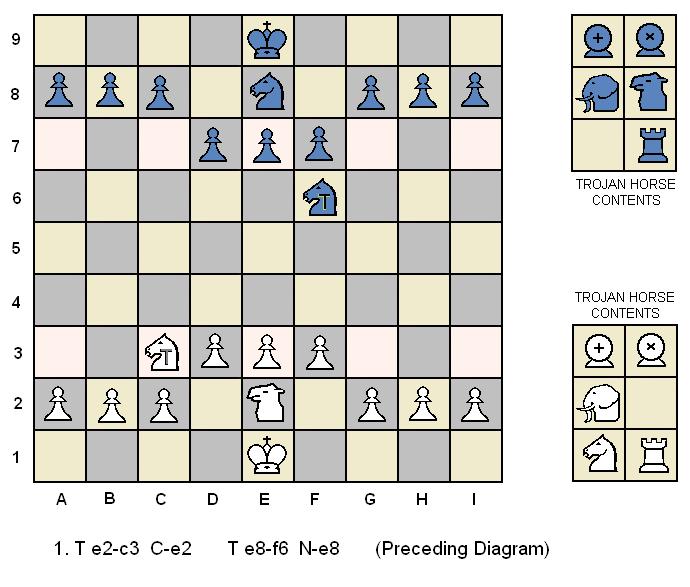 Notice both players employ their Trojan Horses on the first move. But other moves (pawns or the King, can be made). White dropped a Camel off at e2 and black dropped a Knight off on e8. The contents squares {to the right} are used to keep track of what remains inside each Trojan Horse. 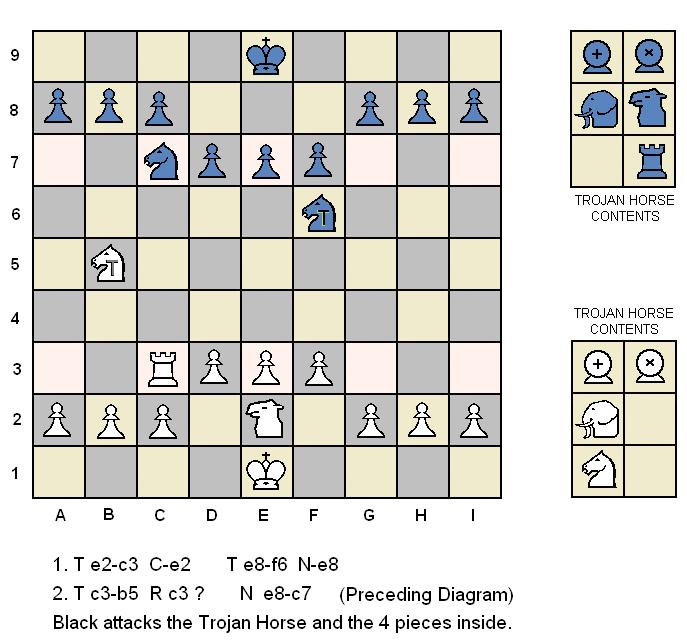 Now white should probably play 3. T b5-a3. It is very important he does not hand over the Trojan Horse and its contents to his opponent. That would be fatal. Note 1: When I envisioned this game I imagined little pieces made of stone or wood (like the Ferz and Wazir in the opening graphic) as well as small Elephants and orthogonal equivalents which I saw in my mind as Camels. I was ignorant at the time of the true Camel piece (a long leaper) and also of the Dabbabah (war engine piece). As pointed out by Charles Gilman in his 17 November 2005 comment, the Camel is [in this game] actually moving as does a modern Dabbabah. Had I known this in advance I'd almost certainly not have used a Camel. On the other hand, historically, ancient players could have theoretically moved a Camel board piece as this "Troy" one moves. 12-03-2005 Update: The Case Western Reserve link offers much historical data regarding chess, I just checked a Case Western Reserve historical chess link (provided eleswhere on the ChessVariants site). I found that the 'Jamal' (not a typo) was first introduced with the first variation of Shatranj Kamil (bout 1000 years old variant). The Jamal (Camel) moves exactly as I happened to depict it in Shatranj of Troy. So, it seems that by coincidence the Camel image I chose is quite appropriate. On a related note Dabbabahs had different movement rules from game to game (at one time like a Bishop). Due to my recent awareness of the Case Western Reserve Shatranj information, I am no longer tempted to replace the Camel with a Dabbabah, as was suggested by Charles Gilman. Though the use of that piece would also be acceptable. Note 2: The introductory graphic is "Wazir and Ferz" (c) 2005 by G. K. Gifford. The graphic was created with Strata3D-StudioPro. A special thanks to: 1) ChessVariants for the use of Alfaerie Chess Fonts and for hosting and maintaining a wonderful site and archive of variants. 2) Charles Gilman for pointing out that a Dabbabah piece should be used instead of a Camel. 3) Case Western Reserve's Historical Chess group for providing valuable information regarding Shatranj pieces. [This note added 12-03-05] Shatranj of Troy, Â© November 2005 by Gary K. Gifford Game Courier Note: I made a Game Courier for Shatranj of Troy by editing a Shogi Game Courier. A special thanks to Antoine FourriÃ¨re for working out the bugs that I could not.