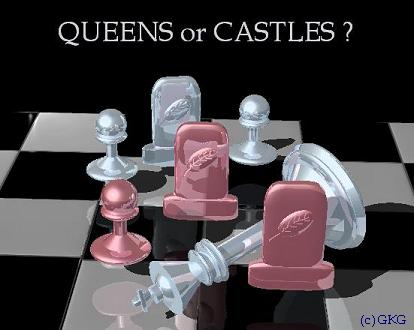 (c) by Gary K. Gifford, November 2005 About the preceding graphic: A Red Diplomat has talked the opponent's King into surrendering. The Diplomat can do this even while his own King is in check. Note that the 3D Diplomat is based on Michael Howe's excellent design of Alfaerie Diplomat. In orthodox western chess we view Rooks as 5 points and Queens as 9. Yet many players prefer the lady over the two towers of stone. In this game our choice is a little different. We can perform a little maneuver called â€œsynergismâ€ and essentially replace our two Queens with four Rooks. Who could turn down the chance to trade 18 points of chess hardware for 20? In addition to synergism, to give the game more of a medieval flavor, Iâ€™ve added two types of pawns called Wizards and Jesters. Iâ€™ve also added a Diplomat. 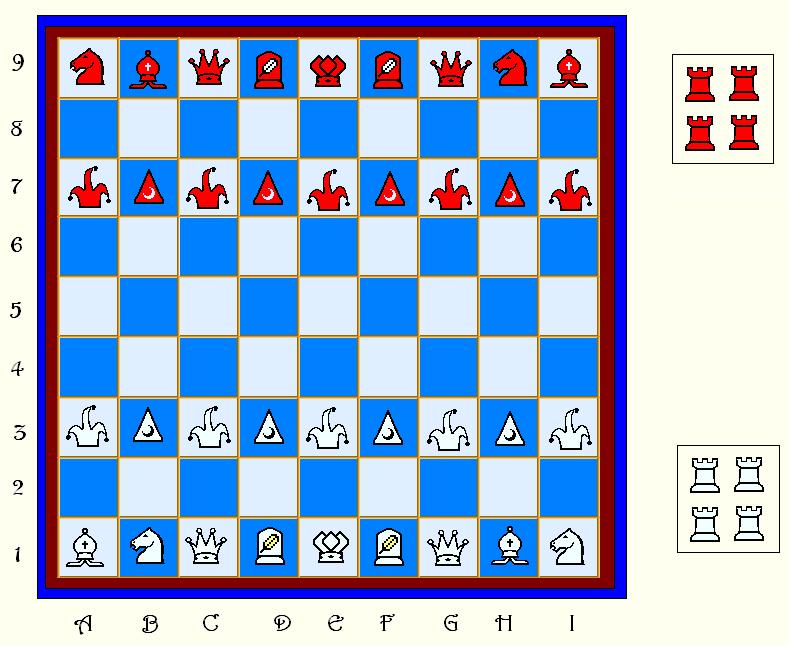 Object of the Game: Checkmate your opponentâ€™s King or force resignation. Note that you can literally force a resignation in this game with the Diplomat piece.

The Pieces and How they Move: Pieces move as in western chess with exceptions as noted. Also, there is no castling. Explanation of the special â€œsynergismâ€ move follows shortly. Your King can be exposed to check under these conditions: (1) If you are completing the Queen/Rook swapping option and you will be out of check upon its completion. (2) If your opponent puts you in check, you can remain in check providing that a Diplomat of yours can move next to the enemy King. This ends the game in your favor. (3) If you have a pinned Diplomat, but you could move it next to your opponent's King. This would put you in check, However, your opponent would instantly resign due to the Diplomat. (See next diagram) 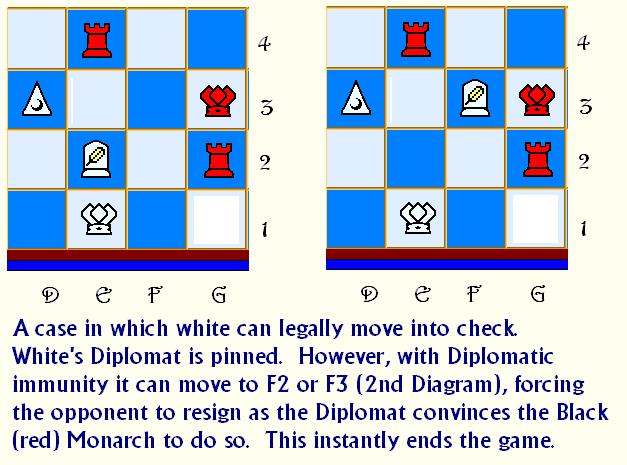 Queen Synergism is a special move. When you move either of your Queens such that your turn ends with at least 1 of your Queens on the third rank or higher and the other adjacent to it (not necessarily on the third rank, simply adjacent), then you have the option to (a) replace both Queens with Rooks and (b) add a Rook at each of the Queensâ€™ original starting squares. If you do this, both (a) and (b) must be done. You cannot perform 1/2 a synergism. You can perform a synergism while in check, providing that you will not be in check upon its completion. This is because the entire two Queen- to â€“ four Rook transition is considered to occur in a single instant in time. 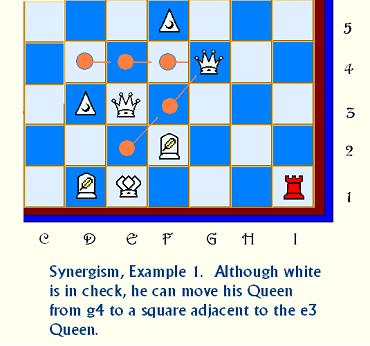 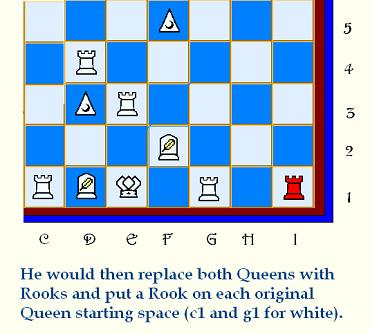 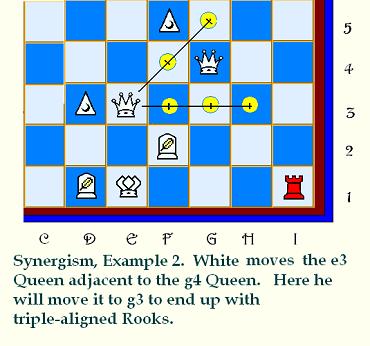 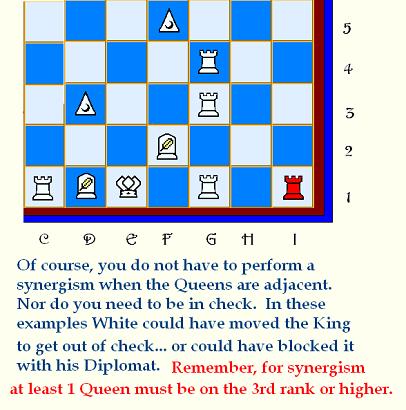 Question: If my Queens are adjacent, from a previous move, in which I did not use the synergism option, could I perform it at the beginning of this turn? Answer: First you would have to move one of the Queens. If the â€œadjacentâ€ aspect remained, synergism could be completed. Question: If I am about move a Wizard (pawn) to the last rank and my opponent checks me, can I still make the move and then remove my Wizard along with the checking piece or pawn? Answer: Yes. This would be a legal capture of the piece. An exception is the Diplomat. As soon as a Diplomat is adjacent to a King, the game is over. The Diplomat cannot be captured at this point. The reason is that he (or she) is a very smooth talker, and once at the Kingâ€™s side he listens and agrees to surrender. Question: If a King does not have a Diplomat next to it, can a Wizard move to the last rank and delete the Diplomat? Answer: Yes. Providing its removal does not result in a check to your King. Question: Assume that a Diplomat is blocking my King from a Check, but if the Diplomat moved it could be adjacent to my opponent's King. Would that be legal and win the game for me? Answer: Yes. Because the Diplomat would force resignation of your opponent, effectively neutralizing the check as the game instantly ends in your favor. See the related diagram above for an example.