In Altorth Hex Chess I mentioned the similarity of the Forerook and Hindrook less to the obvious Bishop and Rook (one colourbound, both reversible) than to the pieces mixing the forward move of one square-board linepiece with the backward move of the other, even down to the number of directions! This started me thinking about variants using the three-way square-board pieces - not as in-hand pieces as used in a game invented by Karl Schultz and implemented by Ed Friedlander, but as array pieces to the exclusion of the standard Rook and Bishop. Since this variant was posted someone else has used them as array pieces. It turns out that straight substitution would reduce strength substantially, even with the loss of colourbinding. The pieces are actually even weaker than their AltOrth counterparts, with only 7 destinations from the edge of the board rising to only 10 from the centre. As the reason clearly lay in the stripping out of the sideways Rook move, I decided that a better approach might be to be to swap round the backward moves of the King's Rook and Bishop, and the forward ones of the Queen's, giving 5-way as well as 3-way pieces. On seeing the result I noted that the a-file Pawn was unprotected and so swapped round the Queen's Knight and its three-direction neighbour.

A generic term for forward-X-plus-backward-Y pieces is hunters, but the Rook-Bishop hunter is often called simply Hunter as a "default value" with specific single-word names for other pieces of the family. I follow the latter practice here, keeping close in theme to other usages but with names that are:
(a) distinct from names of other pieces of quite different derivation;
(b) of a compact form comprising the suffix -er preceding a single other syllable for 3-direction pieces;
(c) the same names with a different suffix for 5-direction pieces.

The variant's own name is after a Bible character, described as "a mighty hunter" but otherwise obscure save in name. He might have remained obscure even in name, had not the composer (in its musical sense) Edward Elgar named after him what would become the most famous of his Enigma Variations (ditto). I am surprised that no previous variant uses so imposing a name as Nimrod thus became.

I have since used Nimrod pieces in three other variants. The small variant Bachelor Nimrod has one Knight and no array Queen - although as the name implies it has promotee Queens which have special powers. The large variant Hunterbeest extends the partial swapping round of moves to Wildebeest Chess' oblique pieces. Finally Bachelor Hunterbeest combines all three strands.

My piece article Man and Beast 12: Alternative Fronts describes a wider range of pieces of the kind used here. Pieces in the subsequent Man and Beast 21: Lords High Everything-Else include "dragon" versions of these pieces (in the Ryu Shogi sense), and this has inspired a further pair of subvariants, which I term DRAGON NIMROD.

As the 5-way pieces on the FIDE orientation have 14 destinations from the edge (same as the Rook throughout the FIDE board) rising to 17 in the centre, I give them female names and my usual pair of radially-enhanced-Rook images. 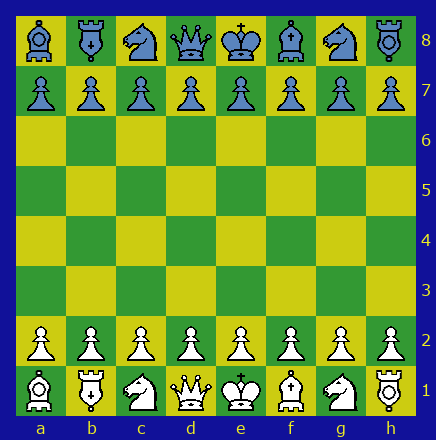 On a corner orientation the 3-way pieces are defined in the same forward-plus-backward way but have two Rook and one Bishop move instead of vice versa. The 5-way ones however have sideways Bishop rather than Rook moves, so I consider them different pieces. I give these my usual pair of radially-enhanced-Bishop images and names based on a particular kind of hunter associated with the same English countryside as the established church - and as Elgar. All four pieces have destinations range from 7 to 14, but with the 5-way pieces having more squares with the larger numbers of destinations. 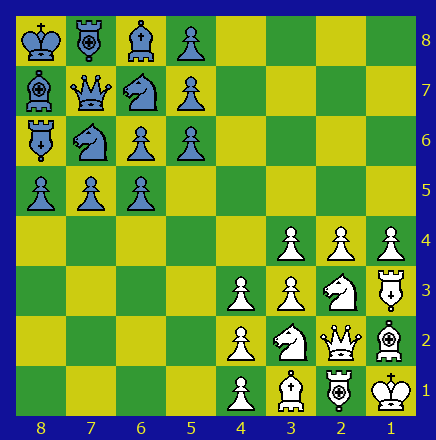 Pieces as they move in the corner orientation: Promotees specific to Dragon Nimrod subvariants:
Back-rank pieces are promotable by addition of remaining King moves. The ACELANDER is the promoted Knight and the DRAGONHUNTER, DRAGONHAWKER et cetera the promoted radial pieces.

The King may Castle with either five-way piece in the FIDE orientation, exactly as with Rooks in FIDE Chess itself. There is no Castling in the corner orientation.

This is not quite a usual-equipment variant - unless you can find a set in which you can balance Bishops upside-down as well as Rooks! A Shogi set works well as that too has eight kinds of array piece. It is best if Kings represent themselves and Golds Queens, leaving the rest promotable in the usual way for Dragon Nimrod. Additionally the Rook and Bishop should represent radial pieces as there is only one aside.

Any new piece can theoretically give Checkmate in conjunction with just their own King, but only the Huntress and Hawkress have full powers in this respect including changing ends as the enemy King approaches, when pushing the King against either end rank. That alone may seem reason enough to distinguish these pieces from the Huntsman and Hawksman, but there is another. On a 3d board (extrapolating the 2d "sideways" to "same-rank") both pairs of pieces can exist independently in the usual 3d orientation. Indeed one might well swap moves round to replace a Rook and Bishop with a Huntress and Hawksman or a Huntsman and Hawkress, should this variant ever be extrapolated to 3d. All four pieces would have 9 directions (the average of the Rook's 6 and Bishop's 12) on such a board, while the plain Hunter and Hawker would have 5. There are also a Huntswoman and Hawkswoman having the same-rank moves of both simple pieces, with 13 directions each.

Returning to 2d, a simpler extrapolation would be that of the corner subvariant to 4 players on a 10x10 board. Two other interesting 2d extrapolations might be swapping moves of long-range pieces within the Mitregi army and the Yang Qi ones. In the first case a Hawkress replacing the left Rook, Hunter the left Bishop, Hawker the right Bishop, and Huntress the right Rook. These would be promotable to Dragonhawkress, Dragonhunter, Dragonhawker, and Dragonhuntress by adding remaining King moves. In the second case, terming forward Cannon plus backward Arrow Shooter and vice versa Fowler, one might have Hunter/Hawkress/Fowler/Shootress to the left of the King and Hawker/Huntress/Shooter/Fowlress to the right.