Having used my Nearlydouble principle to produce an enlarged FIDE-piece variant and an enlarged version of an already large 2d variant, I considered applying it to a 3d variant, and the obvious one to try it out on seemed to be the cube-shaped Raumschach. So how did this variant come to be Nearlytriple, you may wonder. There turns out not to be a good small-numbers-ratio underestimate to the cube root of 2 in the way that 7/5 (alias 14/10) and 11/8 are to the square root of 2. On the other hand 7/5 also serves as a passable cube root of 3, even if a poorer one than it is a square root of 2 and (due to the special connection of 2+2=2x2=2^2=4) fourth root of 4. So I decided to have one aside of the royally-restricted piece (as in Nearlydouble 2d variants) and its Pawn, plus three aside of everything else.

As with Grossraumschach, my 4-player Raumschach enlarged only enough for each army's Unicorns to cover the board between them (note how doubling just the Unicorns and their Pawns filled out the 6x6x6 board's equivalent of a Raumscach camp) I turn the board through a right angle so that the camps run vertically. This is partly to avoid the imbalance of one player advancing from the top down and t'other from the bottom up and partly to allow a 4-player subvariant with each player sitting at their own vertical edge of the board. 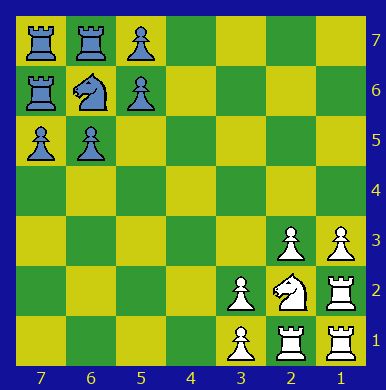 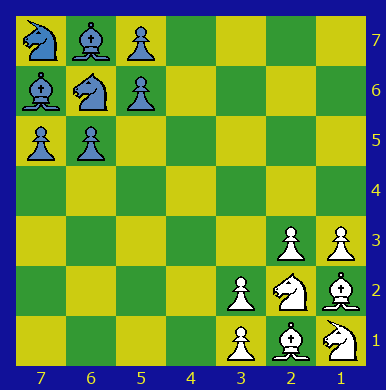 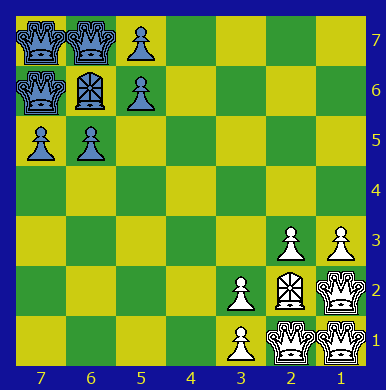 The 4-player subvariant can be extrapolated by arranging additional armies along the empty edges of the board.

Array pieces are as in Raumschach. Pawns have two noncapturing directions - the two orthogonals toward the opposite-colour camp on the level - and five capturing directions - the diagonals combining these with going up or down and the one combining both on the level. It is notable that this combination, inherited from Raumschach itself, gives a 5:2 ratio of capturing to noncapturing moves - far closer to the 2:1 of 2d Pawns than is the 4:1 of a face-to-face 3d variant. In contrast to my Nearlydouble 2d variants I do not bother enhancing the array Knight as each dimension is enlarged only to length 7, 1 less than on the FIDE board. This serves merely to ameliorate the Knight's excessive relative strength in Raumschach.

As simple pieces are weak in 3d (although the Knight is an exception on the original Raumschach board), promotee pieces are compound. Following my convention of calling 26-directional pieces Emp-eror/-ress, I allow promotion to Empress but also to Queen (R+B only), Duchess (R+U), Marshal (R+N), Governor (B+U), Cardinal (B+N), and Cavalcade (U+N). All promotees are unbound.

In the 2-player subvariant play alternates between the two players starting with White. In the 4-player one it progresses anticlockwise starting with Red.

Pawns reaching a cell on the board's opposite-colour edge must be promoted to either an Empress or a compound of two simple array pieces.

In the 2-player subvariant Check, Checkmate, and Stalemate are as in FIDE Chess. In the 4-player one a Checkmated player, that is, one threatened by the player about to play, loses their Emperor but their capturable pieces remain in place but immovable. These may be captured and reintroduced Shogi-style as pieces of the capturing player, but without demotion back to Pawn. As with Grossraumschach, finalist armies may well differ greatly in size, but the stronger might still need all that strength to Checkmate the weaker!

Some Unicorn bindings have two Unicorns aside and some only one. This is of course a softening of the characteristic that Raumschach has of providing Unicorns for only half their bindings.

The possibility of a 4-player subvariant is specifically possible due to the low piece density that Nearlytriple Raumschach inherits from Raumschach itself.

7x7x7 is an interesting size of board as 7x7 is the smallest back rank on which a royally-restricted piece can Castle or Cathedral with a choice of eight different pieces in a face-to-face 3d variant. In the notes on Hourglass Hex Chess I have considered such ranks in the context of a hex-prism variant, which has the advantages of unbinding the Bishop, but on a cubic board Cathedralling with the ordinary Bishop would not really do. One idea that I had was to use Stewardess, Waitress, Valet, and their Contra- pieces - an idea that developed into using their short-range versions and pieces divergent between the 2:n:1 leapers. This inspired the Churl, Samaritan, and Obeyer of Man and Beast 19, which in turn gave me the idea of a variant called Churlish Chess, another example of English self-deprecation like my 2d variant Knavish Chess. I envisage the back rank: