Firstly, an apology for so unimaginative a name. I devised this variant some time ago, but deferred writing and posting in the hope of thinking of a better name but eventually gave up. The movement diagrams suggest a spider dangling from a thread, but as the piece names are unconnected with this it seemed unsuitable for basing a game name on. One advantage is that, to use the vernacular, it does what it says on the tin. It is a hex analogue to my FIDE-board variant Nimrod Chess, which could be a considered a Mixed Radial Square Chess. As Nimrod Chess itself was inspired partly by Altorth Hex Chess, this variant brings the development full circle.

A hex board gives a wider range of pieces than Nimrod's, as it always has sideways moves in both kinds of hex radial. The Glinski orientation has one forward, one backward, and four sideways orthogonals and two each of forward/backward/sideways hex diagonals. The Wellisch orientation has the same with orthogonals and hex diagonals swapped round. Thus where Nimrod has pieces moving in 3, 5, and in the case of the standard King and Queen 8 directions, this hex variant has them moving in 3, 5, 6, 7, 9, and the Grandduke's full 12 directions. I do not bother with a full Duchess as this piece's move is covered by each of five different pairs of non-overlapping pieces, with none of the ten pieces bound. Notable among these are the Ducheranker and Duchefiler as a square-board ranker and filer would share the entire Bishop move (or Rook move if corner-orientated) - Queenranker and Queenfiler - or leave one severely bound - Queenranker and Rookfiler, or Rookranker and Queenfiler. For the same reason of variety I do not bother with oblique pieces corresponding to Nimrod's pair of Knights. It has proven an especially wise decision in light of my rethink of hex piece names concurrently with preparing to post this variant.

One motivation for this page is as a showcase for the hex form of some pieces that I had named - and added to my piece article MAB 12: Alternative Fronts - shortly before devising the variant. Such a piece in the Glinski orientation often differs greatly from the piece with the same name in the Wellisch orientation, so I decided that a subvariant on each would illustrate this. As with the Hunter and Hawker, a piece's absolute directions (except the Grandduke, Ducheranker, and Duchefiler) differ between players even in the same geometry. For example, Sprinters move orthogonally toward the opposite player, but along the hex-diagonal toward their own.

I have refrained from 3-player versions as unlike in Altorth, where it gives all players' pieces (except Migrants) the same absolute directions, such a subvariant complicates the interaction of differnt players' directions here. In fact it removes the vestigial matching of one player's Sprint- pieces with the other's have the Relay- pieces. Even the Ducheranker, which has the same absolute dirctions for both of 2 player would lose this with 3 players. Likewise the Duchefiler.

As this variant's pieces depart radically from traditional hex pieces, I eschew the desperate hex ffen diagram whose images would therefore be too unintuitive. As the way that the piece names are constructed give two groups of very similar ones, letters do not work intuitively either. For this reason I represent each piece by the ranges and directions of its moves. The divergent Broker's noncapturing and capturing moves are in distinct colours. 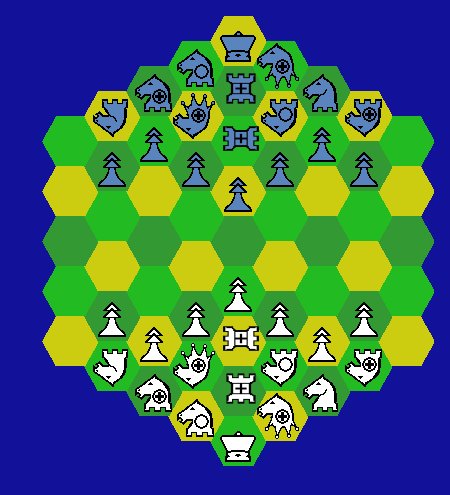 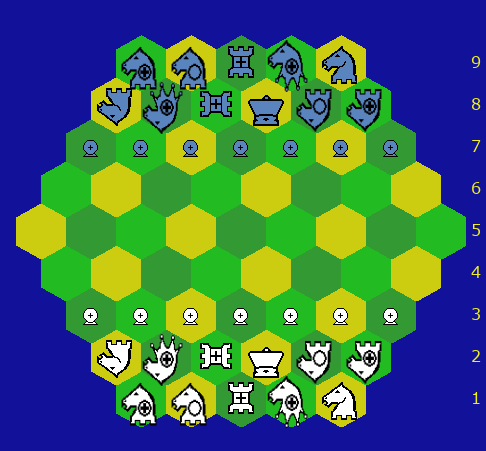 The GRANDDUKE moves one step along any of the 12 radials, and must be kept out of Check.

The DUCHERANKER moves any distance along all three forward and all three backward radials.

The DUCHEFILER moves any distance along all six sideways radials.

7 directions in Glinski, 5 in Wellisch:

The SPRINTRESS moves any distance along forward and sideways orthogonals and the backward hex diagonal(s).

The RELAYRESS moves any distance along the forward hex diagonal(s) and backward and sideways orthogonals.

7 directions in Wellisch, 5 in Glinski:

The SPRINTFOLLOWER moves any distance along the forward orthogonal(s) and backward and sideways hex diagonals.

The RELAYFOLLOWER moves any distance along forward and sideways hex diagonals and the backward orthogonal(s).

The SPRINTER moves any distance along the forward orthogonal(s) and backward hex diagonal(s).

The RELAYER moves any distance along the forward hex diagonal(s) and backward orthogonal(s).

The POINT always moves one step along either forward orthogonal. It is specific to the Wellisch-orientation version.

There are no Oriental rules such as Fortress and River confinements or return from capture.

As there are 1 each of 11 piece types and 7 of the remaining type, they can easily be represented by a Shogi set - one each of King/Rook/Bishop/Gold, 1 promoted and 7 unpromoted Points, and 1 each promoted and unpromoted of everything else. Promotion cannot be represented in the Shogi manner, but a second complete Shogi set off board allows substitution without improvisation. The array can of course be represented less efficiently by two distinguishable FIDE sets - and promotion again by a second set of each design off board.

Pieces can of course be expressed in terms of components. The Ducheranker is clearly Countess+Countcowaress, or Rookranker+Unicoranker, or even Wing+Horn+Wingcoward+Horncoward. The Duchefiler is Countdextress+Countsinisess, or Rookfiler+Unicofiler, or even Wingdexter+Wingsinister+Horndexter+Hornsinister. The Sprinter is Wing+Horncoward and the Relayer Horn+Wingcoward. Suffixing -ress adds Rookfiler=Wingdexter+Wingsinister, and inserting -follow- adds Unicofiler=Horndexter+Hornsinister. The importance of the Wing as a component of the Sprinter and its compounds calls to mind something that W. A. Spooner may have said, misquoting Shelley - see last line: "If Sprinter comes, can Wing be far behind?"