The setup is the same as for Chess except that it replaces Rooks with Cannons, Bishops with Vaos, and Queens with Leos. 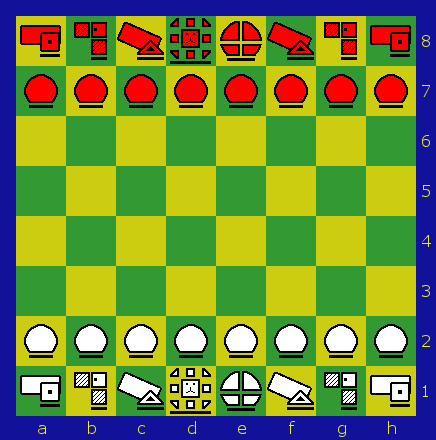 The Cannon moves as a Rook except that it must hop over an intervening piece to capture.

The Knight moves as it does in Chess.

The Vao moves as a Bishop except that it must hop over an intervening piece to capture.

The Leo moves as a Queen except that it must hop over an intervening piece to capture.

The King moves as it does in Chess. It may presumably castle with the Cannons.

The Pawn moves as it does in Chess. Upon reaching the last rank, it promotes to any of the same pieces it can promote to in Chess, including the Rook, Bishop, and Queen. Pawns may not promote to Cannon, Vao, or Leo.

The game is played like Chess except for the replacement of the Rooks, Bishops and Queens with Cannons, Vaos, and Bishops. Kings can castle with Cannons, and Pawns promote to regular Chess pieces.