Kingsmen is played on a 9x9 board. The arrangement of the pieces is almost the same as in Bishops Chess, but with 9 Pawns on the third rank. 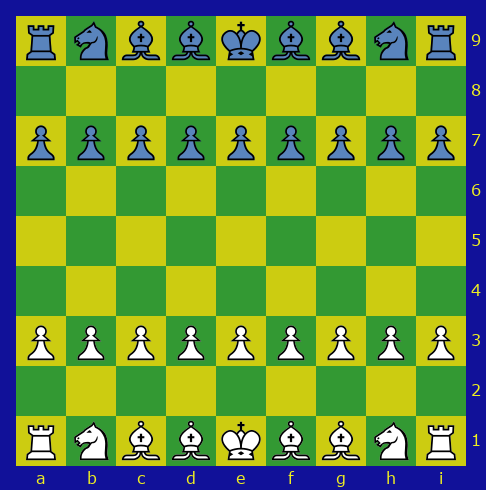 All the pieces move as in Orthodox Chess, except for the Pawn, which cannot double advance on its first move and hence also without the en passant ability.

All pieces except the King promote in the last three ranks, similar to Shogi.

A promoted piece can move one square in any direction like the King in addition to its original moves:

The promoted crowned pieces are non-royal and can be captured like any regular piece.

The rules are the same as in Chess except regarding promotion, as described above. As in Chess, the King moves two spaces toward the Rook to castle. Because of the wider board, though, castling works like Queenside castling on each side.

Kingsmen is an attempt to create a fun chess variant with perfect symmetry. All pawns are protected at the beginning, some by more than one piece. The promotion rules are inspired by Shogi, where all minor pieces promote to a Gold General. In Kingsmen, all pieces gain the King's moveset upon promotion. This is the source of the name Kingsmen.

Harmonious Combination of the Classics

Let me share my thought process on how I invented Kingsmen.

If you look at Shatranj, the original precursor of Orthodox Chess, the Alfil has a very peculiar diagonal leap move which only allows it to reach seven squares on the 8x8 board. The two Alfil pieces do not have diagonal symmetry and can never meet each other. Ferz, the other diagonal piece on the board, is an only piece like the King, and is not paired with another diagonal piece like the Alfil. You can view a brief analysis of this absence of diagonal symmetry in Shatranj here. The evolution of Chess in Europe has replaced these two pieces with the Bishop and Queen. The rest of the Shatranj pieces are unchanged, except for the Pawn which can double advance on its first move and capture en passant.

Why was the Alfil and Ferz changed to Bishop and Queen? I believe it was to restore a certain kind of symmetry on the 8x8 board, with more mobile Bishops that act along the whole diagonal and the Queen acting like an enhanced King (any number of squares in an orthogonal or diagonal direction), effectively making it an amalgam of the Bishop and Rook. The fact that this version of chess has endured for over 500 years and played all over the world is a testament to the beauty and elegance of this design. However, there are two glaring issues that contributes to the asymmetry and peculiarity of Orthodox Chess - Queen and Pawn. The Queen is an overpowered piece and the centre of attention in a Chess game. It is the most powerful attacking piece, and its sacrifice is often a big deal. The Pawn moves one square forward and captures one square diagonally, but it can also double advance on its first move and capture en passant. Presumably, this is to make the game faster since the Pawns are arranged on the second rank at the start. This is probably the best that could be done to restore the symmetry and beauty that was lost when the Alfil and Ferz were forced onto an 8x8 board.

The chess inventors in Europe back in the 15th century were probably not exposed to variants of the East such as Xiangqi and Shogi. They were fixated on improving chess on an 8x8 board, which resulted in what we have today. What if they tried to make chess perfectly symmetrical and without any peculiar rules, at the same time making it fun and exciting? I believe they would have also came up with something very similar to Kingsmen. In order to add diagonal symmetry like we see with the Advisor and Elephant in Xiangqi, I added two extra Bishops flanking the King on the back rank, and removed the Queen. The back rank of Kingsmen looks similar to Xiangqi, with the diagonal Advisor and Elephant replaced with the diagonally more powerful Bishops. There is now a pair of light-squared and dark-squared Bishops supporting each other, just like the Advisor and Elephant in Xiangqi, but the Bishops are much more powerful and can perform deadly attacks on the enemy flank.

In Shatranj, the Pawn promotes only to a Ferz on the last rank. This is very slow, and in the history of chess, two notable ways have been devised to make the Pawns from Shatranj move and promote faster. Firstly, in Orthodox Chess, Pawns are allowed to double advance on its first move (and hence able to capture en passant) and promote to any piece (except the King) on the last rank including the all-powerful Queen. Secondly, in Makruk, the Pawns are placed on the third rank and can promote on the enemy's third rank. The Pawn placement, movement and promotion rules in Makruk are simple and logical without additional peculiar rules. However, the Pawns in Makruk only promote to the Met, a very weak piece, the same as in Shatranj.

Shogi also adopted similar Pawn placement and promotion rules to Makruk, but the Pawn in Shogi promotes to a Gold General, which is a much more powerful piece than the Ferz/Met in Shatranj/Makruk. In fact, all minor pieces in Shogi promote to a Gold General upon reaching the last three ranks on the enemy side. In contrast, the Rook and Bishop in Shogi can be seen as gaining the King's move upon promotion, as they can move like the King in addition to their original moveset. This is a much more powerful promotion than to a Gold General. What if we take this formidable promotion and apply it to all the pieces? We get Kingsmen!

So, that is how Kingsmen were born - by analysing the best features of the classic chess variants and combining them in a harmonious way. I would like to think of Kingsmen as an evolution of Shatranj into Chess, Xiangqi, Makruk, and then Shogi. First, I introduced diagonal/perfect symmetry into Chess by removing the Queen and adding extra Bishops to mirror the Advisors and Elephants in Xiangqi. Then, I placed the Pawns in Chess one rank higher like in Makruk and Shogi, and removed the peculiar double advance and en passant rule. Finally, I applied the most powerful promotion rule in Shogi to all Chess pieces.

How to play Kingsmen using readily available board and pieces:

Place the chess pieces on the shogi board as in the diagram above. When a regular chess piece is promoted, mount it on a flat checker piece. You can secure them using commercially available modeling clay.

Play with Zillions of Games:

3x9 board with the strong pieces and King crammed into a 3x3 "castle":

Regular pieces gain the King's moveset upon reaching the last three ranks as in Kingsmen. The King can castle with either Rook by simpy swapping positions (usual castling rules apply).

Chess with Different Armies variant on a 9x9 board with the regular Kingsmen army against a Dark Horde army consisting of:

All non-royal Dark Horde pieces gain the Knight's moveset upon reaching the last three ranks, in parallel with the promotion rules of Kingsmen.