The idea behind this variant was inspired by my first reading of David Cannon's Round Honeycomb Chess (RHC) - which has no connection with my own, urgently in need of having its 2010 update posted, Honeycomb Chess and its offshoots. Paradoxically this variant too has little connection with Uri Bruck's similarly-named Hourglass Chess. In terms of square-board variants it is more akin to my Dream Chess family, which currently exists for 46 and for 47 squares, in that like this variant each of two overlapping convex areas containing one player's camp. However, as the hex variant was very definitely inspired while I was awake the Dream Chess label would not be appropriate.

At first I thought - mistakenly - that I saw a flaw in RHC that White's strongest piece could immediately capture Black's and get out again unscathed. When I went back and checked I noticed the bar on a diagonal move between two adjacent pieces, but it set me thinking how one might arrange a variant with a 9-cell Wellisch back rank without this bar. I drew on my recent Compact Hex Chess (CHC), which used three-rank camps. As combining this size of rank with normal-sized armies makes for very sparsely populated camps I decided to apply the Doubleback principle described in the Notes section of Nearlydouble Chess to fill it out. This makes for a game with a just over FIDE-sized board but armies half as big again as FIDE ones!

I could have gone straight ahead with a file-wraparound variant along the lines of RHC, but decided against this for two reasons. Firstly it would look too "copycat" so fast on the heels of RHC itself. Secondly it would require enormous and quite complex single array images, and while I achieved one for my own round hex variant Cyclohex it took some time and I wanted to get this page out quickly before someone else was similarly inspired! For this reason I devised a variant that, though not itself wraparound, could be made so by joining the two ends of each back rank and adding in a diamond of side 7 with an extra piece at each end and two extra Points in front. Initially I considered placing the Grandduke and Duchesses (bigamy is characteristic of all Nearlydoubles and Doublebacks!) at three-cell intervals with an eye to wraparound, but I eventually rejected this as it would leave two bindings with three Unicorns each and the third uncovered, rather than two Unicorns for each binding. So I ended up with the ducal threesome centrestage, a FIDE-echoing arrangement suiting the basic non-wraparound board better.

You will notice that the previous paragraph mentions Points as the front-rank pieces. As with CHC, I decide to make the army a revergent one, using the symmetric pieces common to Glinski and McCooey but reverting from the divergent Migrant and Broker back to the older (and on Wellisch boards dual-direction) Point. One difference is that where CHC's Points can fan out as they approach the middle rank before being funnelled into the enemy camp, here they get funnelled into the waistline of the middle rank before fanning out again beyond. As with Nearlydouble Hex Chess I easily derived Anglojewish and Mishling versions.

As the Point is a Shogi piece even on square boards I also devised an Hourglass Simplified Hex Shogi army - but simplified even further by dispensing with Helm analogues altogether. The Senhelm would have too few cells from which it could advance satisfactorily. I could have confined it to the triangle including the entire enemy camp, but that triangle has only six cells of the player's own camp! In any case not having that piece allowed all other relevant pieces to have twice their standard numbers. Only doubling rather than tripling leads to only two Unicorns, one for each of two bindings, but as they can be promoted to an unbound piece and/or captured and reintroduced on the third binding this matters less in a hex Shogi. As with CHC the two armies can be pitted against each other as another illustration of the Japanese part in World War 2. Finally I added Hourglass versions of Wellisch Chess, Okisaki Shogi (most pieces not doubled in number), Hexgi, and CHC's Hex Orthogonal Draughts. 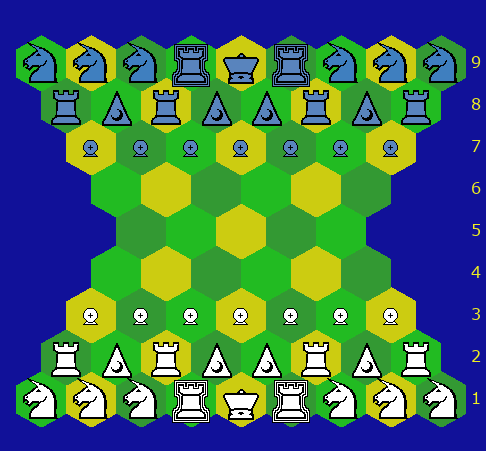 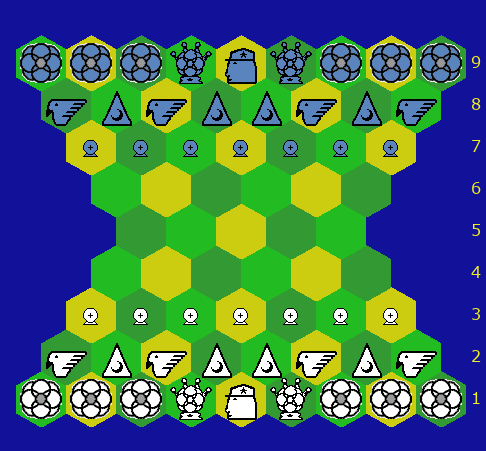 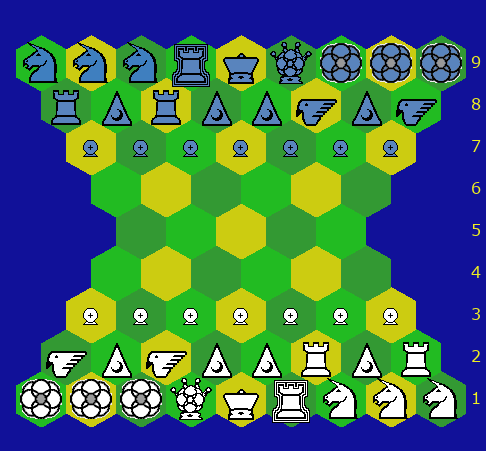 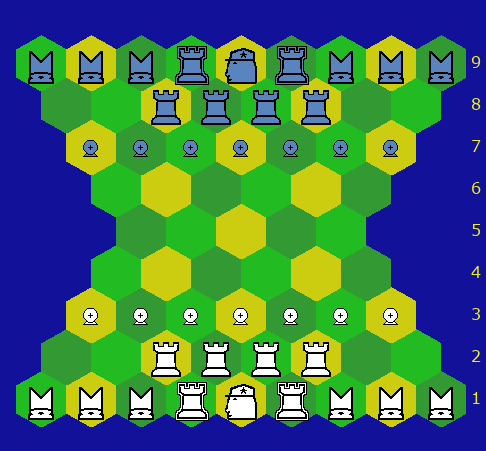 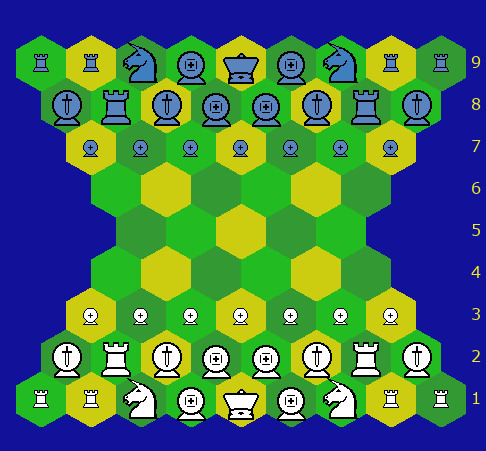 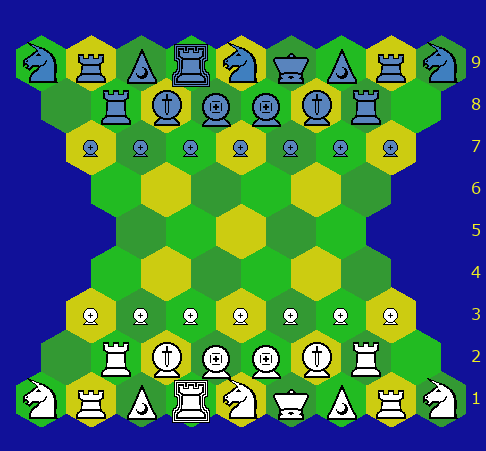 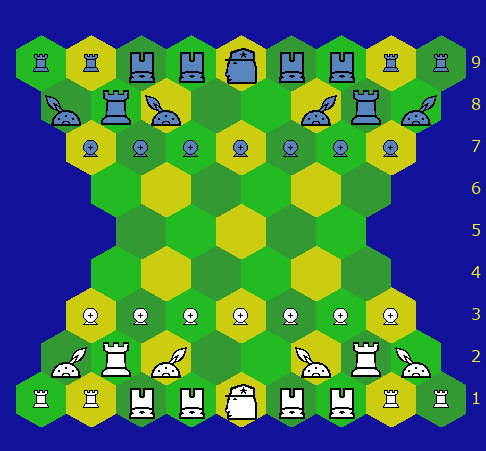 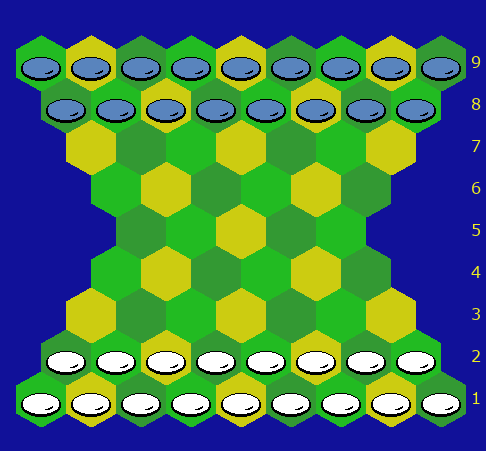 In variants S and O the Rook is promotable to Vicereine and the Unicorn to Besieger. The Azuregeneral, Wing, and Point are promotable to Brassgeneral.

In variant H the Wing and Supersaltire are promotable to Wazirranker.

Each Sennight leap and each step of a diagonal move must be made within one or other triangle. For example, a Duchess or Unicorn cannot move from an end cell of one fourth rank to the cell at the same end of the other fourth rank.

A diagonal move as a whole, however, may be made up of steps within one triangle followed by steps in the same direction within the other. For example, the innermost Unicorns become En Prise to each other as soon as the Points between them have moved off the diagonal, by moves of four steps in one triangle to the end cell of the middle rank followed by four in the other triangle.

Revergent/AJ/Mishling Points reaching the far rank must be promoted. Shogi, Okisaki, and Hexgi promotions take place on the three ranks of the enemy camp - the same place as in standard Shogi.

Captured Shogi, Okisaki, and Hexgi pieces can return to the board unpromoted, in a location where they can move in that state, in place or a normal move.

How pieces return from capture in Simplified Hex Shogi versus Revergent follows the CHC rule. As the differential in piece numbers is reduced compared to the 91-cell games, I decided to make it player-dependent rather than piece-dependent. On the other hand bringing Duchesses into the Simplified Hex Shogi army might bias the game too much to them, so I decided that pieces should return as their positional equivalents - Rooks as Wings, Sennights as Senhelms, Unicorns as Azures, and Duchesses as Brasses. Nothing returns as a Unicorn or Rook. Promoted Points are treated as whatever they are promoted to. Hex Shogi pieces captured by the Revergent army are lost from the game.

The General and Rook can be seen as a Wellisch analogue to either themselves or the King and Queen, depending whether you see the Bishop move as lost or absorbed into the Rook one.