This variant results from planning a 4-player variant using as many pieces as had coloured images. Most are FIDE and Chaturanga pieces, although with the Cannon image added for my Pass Variants I thought of using it for the Dabbaba in what became 16 Seasons Chess. The FIDE and Chaturanga pieces alone suggested armies intermediate between Courier and Courier de la Dama. I considered a 12x12 board with the corner 3x3 sections missing and the 12 back-rank pieces grouped Fivequarters-style on the back 2 ranks with or without Pawns on the 3rd. A slightly modified variant has since materialised as one of my 12 Sharp Chess family of 4-player variants on that board.

While I was awaiting inspiration for what to name such a variant it dawned on me that I could "back-form" a variant combining Courier with the 2-player inspiration behind Fivequarters, John Groeneman's Half Chess. The retaining of Rooks at the corners with Knights immediately in front reinforced this idea. This variant is the result. It retains the modification of having a Ferz of each binding rather than a Prince ("Mann"), but restores Courier's Wazir ("Schleich") rather than the Queen that the 4-player variant has. This gives the same one-step foursome on the central third of the camp as my own Courier Kamil and Courier Ashtaranga.

These thoughts of Half Chess variants have also inspired such variants of Shogi and Xiang Qi and a family of 6 by 10 Pawnless Half variants based on 6 10-rank and 10- or 11-file variants. 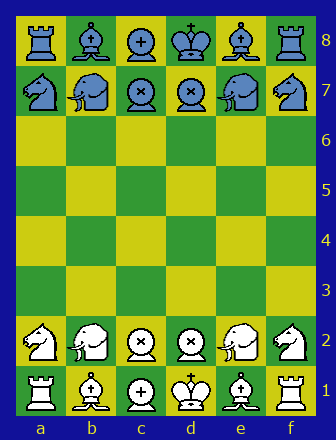 Pieces are as in Courier, except with two Ferzes and no Prince or Pawns. The board shape limits Bishop and sideways Rook moves to 5 steps. It is because this restricts Bishops less than Half Chess that I keep them back on the first rank and put shorter-range pieces forward.

There is no Castling or other special King move. There could be a subvariant with Wazir-side Castling but I suspect that it is of little use in Pawnless variants anyway. Check, Checkmate, and Stalemate are as in FIDE Chess.