This game started as a simple combination of relatively powerful short-range pieces to illustrate how they work, and work together, but after making the preset it became obvious this is a vehicle for a 3-moves/player turn variant, with enough curbs on how the 3 moves each turn are made that the game appears quite playable. So I'm making an official game page in case someone wants to try an experimantal multi-move game, or just wants to fool around with a larger than usual variant. 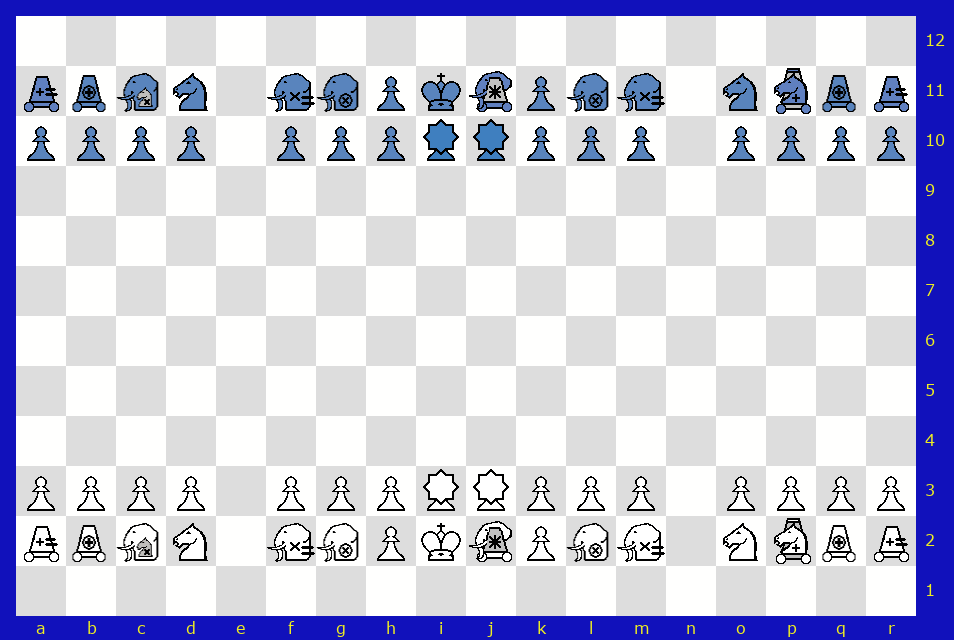 King. The royal piece. This is the standard chess king, moving 1 square in any direction. The king may not move into check.

Jumping general. Moves as the modern elephant or modern war machine. It may move 1 square or leap 2 squares orthogonally or diagonally.

Rule Zero - all the rules of chess hold, except as otherwise stated - is in effect.

There is no castling in these variants.

There are 2 variants of this game, played with the same setup.

The first variant follows all the standard rules of chess, with board and piece rules as noted above.

The second variant allows 4 pieces, the king, the jumping general, the high priestess, and the minister to act as leaders of any of the 3 sections of the army deliniated by the 2 open files, e and n. As long as at least 1 of the 4 leaders is in a board section, the player is allowed to move one piece that starts the turn in that section. No piece may ever be moved twice in one turn. At least 1 piece must be moved each turn, or the non-moving player loses. The 2 empty files belong to each neighboring section, so a piece on either the e or n files may be moved by either the leader of the center or the leader of the appropriate wing.

This is an experimantal game. It is intended to see if a multi-move game can be structured to play very much like standard chess, but at a faster pace. Or it's just another oversized game where it's hard to develop all the pieces.

Initial playtesting showed flaws in the game, like the original 1-mover was terrible, and the play balance was not right for a 3-mover. So after some conversation with Kevin Pacey, who playtested the 3-mover with me, I'm offering this larger variant as a 3-mover with legit chess play in all 3 areas of the board. And as an experimental 4-mover.

All the above rules hold except as noted below:
Pawns follow the double initial step rules, including en passant. Pawn promotion:
on ranks 2-3 or 9-10, to guard;
on ranks 1 or 11, to jumping general. This piece acts as an aditional leader.


The "common files" are now the g and s files.

Experimental rule. Any area the king is in may allow both a piece and a pawn to move each turn, if so desired.
The player cannot move 2 pieces or 2 pawns in that area, only a piece, or a pawn, or one of each.

A king on either the h or s files doesn't allow a pawn and a piece to move in both areas, only one.