Western chess and chess variants tend to concentrate on long range pieces, or pieces with an unlimited slider [bishop, rook] component. Eastern games use more limited short range pieces that are weaker in general than the Western pieces. A major exception to this trend in Western chess variants has been Ralph Betza's Chess with Different Armies forces, which feature many unusual short and medium range pieces. But short range pieces never quite went away. They have always been around. Some have even shared the spotlight with the more traditional variant pieces in games. But few have built armies all of short range pieces, Pizza Kings by John Lawson being a notable exception, and there are others.

A minority opinion holds that short range pieces can do very well on larger boards. This opinion has led to sometimes lively discussion. Following are some weapons perfectly suitable for both sides to use in the argument. 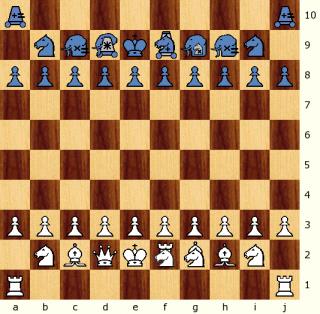 Grand Chess vs The Shatranjian Shooters

The standard Grand Chess pieces are used, but not listed, as this is overlong already. All pawns are modern, with double initial first step and the ability to capture en passant.

Jumping general. Moves as the elephant or dababba. It may move 1 square or leap 2 squares orthogonally or diagonally.

WarElephant - The WarElephant may move as either as either the Hero or Shaman. It may step one square, leap two squares, or do both, in either order, in either an orthogonal or diagonal direction. It moves in a straight line; it may not change directions during a turn. It captures by replacement, stopping and ending its turn on the square of the piece captured.

Sliding General - This piece is a combination of 2 guards. It slides 1 or 2 squares. It may not jump. It may change direction during its move. It may not make a null move [move off and then back onto its starting square]. It captures by landing directly on an opposing piece and ending its turn.

War Elephant - This is a combination of ferz, alfil, and dabbabah. It may move 1 square diagonally; or jump 2 squares either orthogonally or diagonally. It captures by landing directly on an opposing piece and ending its turn. This is a colorbound piece.

Except for specific variant piece movement, all rules are as in standard Western {FIDE] chess.

I'd like to thank Abdul-Rahman Sibahi, Christine Bagley-Jones, and David Paulowich for helping this series get designed. HG Muller and Jeremy Good were also involved more peripherally. And I especially thank all those who encouraged me to do this originally, by doubting short range pieces are capable of standing up to modern Western pieces.

I thank Christian Freeling for his kind permission to use the "Grand" name and set-up in Grand Shatranj.

I thank Steven Streetman for the 2 immediate inspirations for this page: his excellent recent posting of the CwDA Spartan Chess; and his gracious offer to write a guide for game [and other] submissions.

Abdul-Rahman Sibahi had the original idea for a shatranj CwDA, and asked me to work with him, resulting in the original 2007 post of CwDA: The Shatranjian Shooters
http://www.chessvariants.org/index/msdisplay.php?itemid=MScwda:theshatra