This variant arises from an idea that I had in my piece article MAB 21: Lords High Everything-Else for pieces imitating other pieces' directions but retaining intrinsic characteristics of being long-range or short-range. As directions potentially imitated would usually include the orthogonal I paired names into masculine for the short-range and feminine for the long-range piece. The names should be recognisable as based on the Joker, Friend, and Orphan familiar to problematists, which move exactly as the piece type they imitate (adjusted for their own army). Any variant using such pieces would of course need pieces with intrinsic directions, and the FIDE pieces seemed a good enough lot of those. In fact I decided on two identical, FIDE sets to keep up the stock of pieces to imitate. 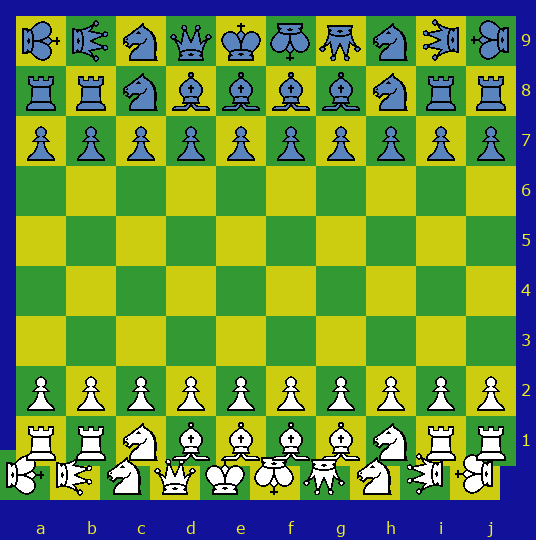 Unpromoted Pawns, and short-range pieces imitating them, have an optional double-step noncapturing move from either rank of their own camp. This is not inherited by imitating pieces which are outside their own camp. Pieces making this move can be immediately captured En Passant by an unpromoted enemy Pawn, or short-range piece imitating one, as if they had made only the single step. Long-range pieces imitating unpromoted Pawns can move any number of steps anyway and can neither capture En Passant nor be so captured.

Castling follows the Wildeurasian Qi requires that the King has not left the middle two files, the Rook involved has not left its own and the adjacent file, neither has left the back two ranks, and both are on the same rank with no intervening piece. They move toward each other within that rank, the King to the Bishop file and the Rook to the Camel file. The King may not castle into, out of, or through Check.

A Pawn reaching the far rank must immediately be promoted to any other capturable array piece, including imitating ones. Imitating pieces on the far rank cannot imitate unpromoted Pawns.

Check, Checkmate, and Stalemate are as standard as regards the King itself. They do not affect pieces imitating Kings.