My first thought was the stronger pieces moving as Rook, Bishop, Knight, and their compounds and switching with weaker pieces. Shogi's back rank would represent their FIDE positional counterparts promoted, and the weaker versions unpromoted. Shogi's middle rank would represent knighted pieces promoted, and their weaker versions (not themselves, note) unpromoted. The King would represent the Queen (so a Kingless variant) and the Gold its weaker counterpart - swapping those two corresponding to the more usual flipping.

As the only satisfactory weaker Knight counterpart seemed to be the Crab, and I wanted different weak pieces for each subvariant, I dropped the Knight. That left five FIDE piece types - which meant a lot of the Shogi set going unused. Next I asked: "Well what radial piece do I sometimes substitute for a Knight?" The answer was the similarly equine Unicorn. Thus this came to be a 3d variant, and I chose to use a 6x6x6 board with 4 identical Shogi sets. That gave files for 4 each of the 6 simple piece types, and 2 each of the 6 compound piece types. The second rank was filled with 4 lots of the Shogi front rank.

The perfectly cubic board also influenced the name as the ending -schach is my marker for such a board, inspired by Raumschach. My first thought was DoppelgÃ¤ngerschach. Only when I posted the page and it failed to turn up on the lists did I think to check whether the DoppelgÃ¤nger had any existing meaning in Chess variants. It had and I guessed that the similarity to the names of existing variants was the reason for it not appearing.

Deciding to rethink it, I noticed a certain similarity to my earlier Nichtschach. The use of 4 each of 6 types of simple piece and 2 each of 6 kinds of compound piece is one similarity; the lack of Check/Checkmate/Stalemate is the other. So I settled on naming the general idea as a particular form of Nichtschach, with the prefixes added to the plain Nichtschach.

I devised several subvariants, but all with the same long-range pieces. Originally the four main subvariants were ELEFANTNICHTSCHACH (based on historic predecessors real and notional), GENERALNICHTSCHACH (hard G and extrapolating from Shogi's own generals), SCHWEINNICHTSCHACH (this page being first posted in the Year of the Pig), and RAJNICHTSCHACH. Since then I have added others but only one, PASCHANICHTSCHACH, do I consider a main one of the same kind. This one was delayed until I was happy with the names for the short-range pieces. I have also added SPRINGERNICHTSCHACH, reintroducing the Knight, to the main variants as its array is easy to do now that I have established images for its pieces.

Thanks to this range of images I can show a wide sample of arrays. 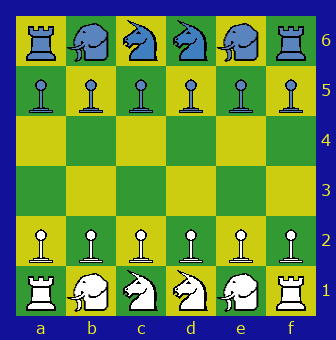 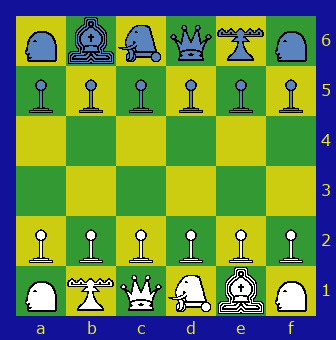 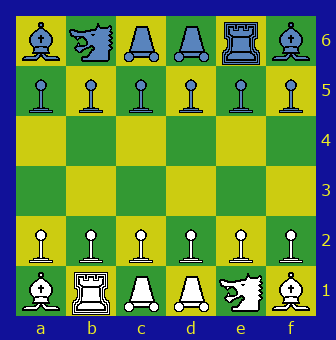 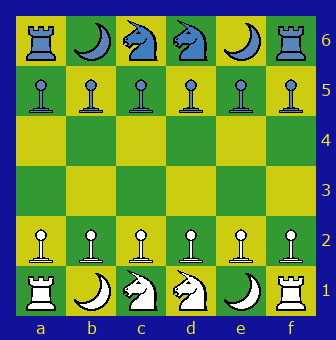 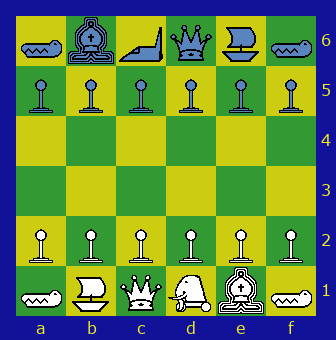 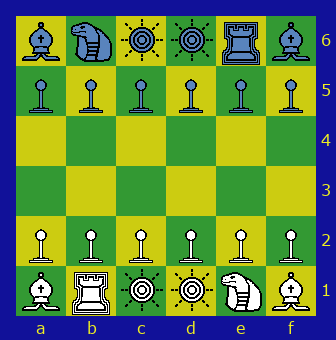 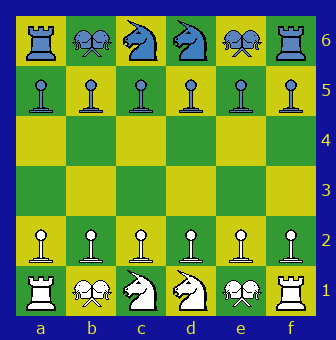 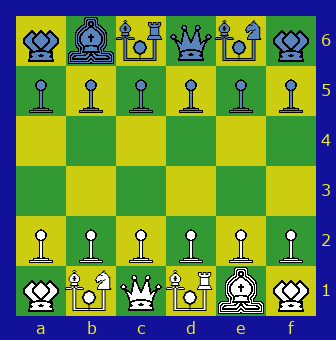 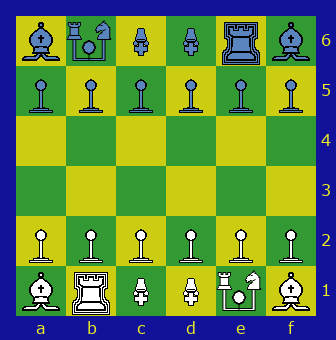 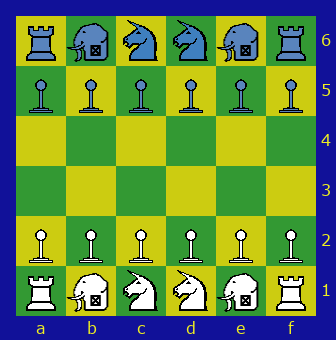 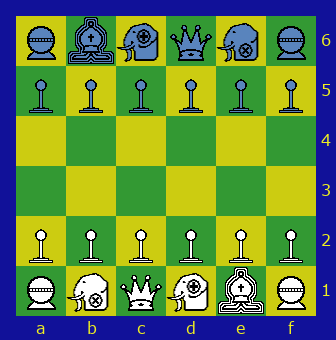 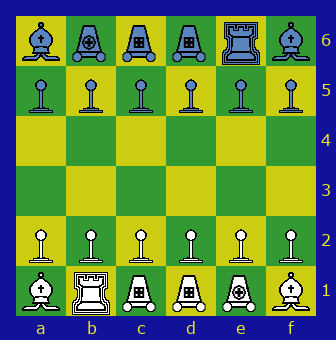 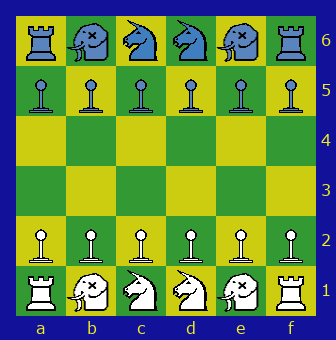 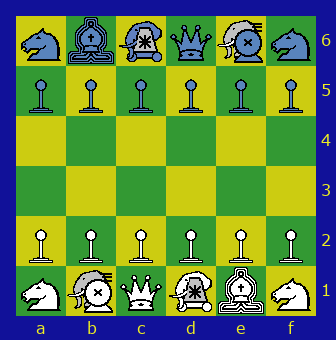 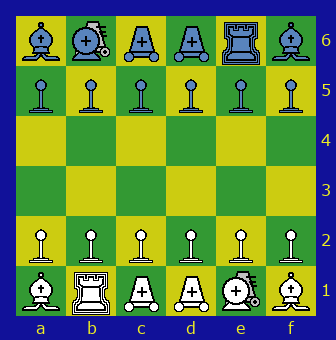 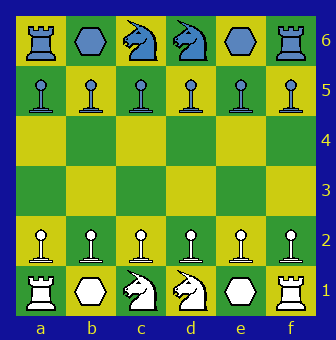 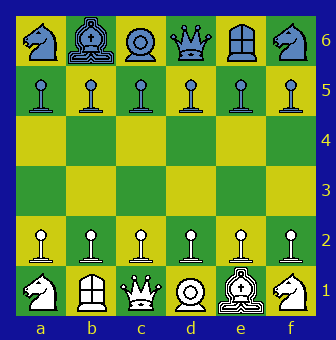 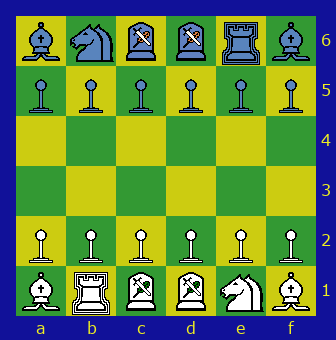 I list pieces of all groups in the same order. Note that no piece in this variant moves in all 26 radial directions.

Front-rank pieces and their promoted forms are common to all subvariants.

Their promoted form is the STOCKFWAZIR. This moves like the Stockpoint itself, or backward to the same three files, or one step along any same-rank Bishop line - a total of 10 directions. The F is not a typo, it is there as the first letter of Ferz, alluding to its same-rank move. They are represented by promoted Points.

Long-range pieces are common to all subvariants. They all move any distance through empty intervening cells. They are represented by Shogi's Kings and promoted pieces.

Short-range pieces are represented by Shogi's Golds and unpromoted pieces.

Elefantnichtschach short-range pieces move exactly two cells in their long-range counterparts' directions. They cannot be blocked by a piece halfway, as this is extreme enough of strength and weakness with the pieces having such small bindings.

Generalnichtschach substitutes pieces moving only one cell instead of two, but in all 9 forward directions as well as those of their long-range counterparts. They cover ground slower than Elefantnichtschach pieces but can reach any cell of the board.

Schweinnichtschach is intermediate between the two previously-mentioned subvariants. Its short-range pieces move one cell in all their long-range counterparts' directions, or two cells in just those pieces' forward directions. They share their long-range counterparts' bindings or lack thereof. Their names are explained in my piece article Man and Beast 11: Long-Nosed Generals.

Rajnichtschach enhances Elefantnichtschach by adding a move one cell in their forward directions. The Memsahib is bound to one in four files, but the rest share their long-range counterparts' bindings or lack thereof. Their names are explained in my piece article Man and Beast 11: Long-Nosed Generals.

Paschanichtschach enhances Elefantnichtschach by adding a move one cell in all directions. They share their long-range counterparts' bindings or lack thereof. Their names are explained in my piece article Man and Beast 06: The Heavy Brigade.

Springernichtschach short-range pieces are the oblique ones to the second perimeter (so the Knight, called Springer in German, gets in after all). They are in fact the ones of Nichtschach itself, albeit in different array positions. This makes for quite a concentration of power here as they keep returning. They are;

SEXTON (2:1:1, with the Bishop's binding and its name the title of a minor church official)

A slightly different approach is BÃ¤rnichtschach, in which the standard pieces' counterparts are their odd-only counterparts, which share their bindings or lack thereof. These pieces have various kinds, described in my piece article Man and Beast 06: The Heavy Brigade, but I envisage using the stepping ones (blockable anywhere en route).
The PANDA (odd-only Rook) always changes both Bishop and Unicorn bindings. The name is well-established despite not currently being in the Piececlopedia.
The BEAR (odd-only Bishop) always changes Unicorn binding but never Bishop binding. The name is my analogy on the basis of all-black and all-white bears (the traditional colours of Bishop bindings) corresponding to the black-and-white giant panda.
The HARLEQUIN (Panda+Bear) always changes Unicorn binding. Each "other" Unicorn binding corresponds to all Bear moves in a given plane and all Panda moves at right angles to that plane. The name is from the idea of moving between four Unicorn (or in 2d four Dabbaba) "colours" as well as suggesting the word Queen of which it is the odd-only form.
The RACCOON (odd-only Unicorn) always changes Dabbaba binding but never Unicorn binding. The name is after a relative of the obscure red panda (which is unsurprisingly smaller than the giant one!)
The PANTALOON and BALLOON are the Raccoon's compounds with the Panda and Bear (such as Kipling's Baloo) respectively. Pantaloon is a character alongside Harlequin whose name combines the component pieces, and Balloon the most similar word replacing the P of Pandas with the B of Bear.

Usually both players play with the same army. If anyone is adventurous enough to try a different-armies variant, each player will gain short-range pieces with their own army's moves, rather than ever have a mixture of theirs and their opponent's. That rule is implicit in the game's Shogi-set origins.

Stockpoints have no initial double-step move and no En Passant. With no royally-restricted piece there is no Castling.

A player capturing an enemy piece can reintroduce it as its counterpart in place of a normal move. A captured Stockpoint returns as a Stockfwazir and vice versa, in the latter case within the capturing player's camp.

A further subvariant of Elefantnichtschach, SPANIENNICHTSCHACH, is possible using crossover compound pieces. This would have the disadvantage of complexity but the advantage of better balance between the strengths of pieces. This would involve replacing Queens with INFANTAS (Rook+Elephant), Alibabas with INQUISITORS (Bishop+Dabbaba), Duchesses with CONCUBINES (Rook+Eunuch), Dybbuks with CYCLOP(S)ES (Unicorn+Dabbaba), Governors with MUTILATORS (Bishop+Eunuch), and Elks with BEHEMOTHS (Unicorn+Elephant). Doing the same to most subvariants would make play too hard to follow, but it could be done with Springernichtschach and BÃ¤rnichtschach. The first would replace Queens with SENVASSERS (Rook+Sexton), Oberons with NIRDINALS (Bishop+Ninja), Duchesses with MARSHALS (Rook+Knight), Samurais with NIVALCADES (Unicorn+Ninja), Governors with CARDINALS (Bishop+Knight), and Churchwardens with SEFILAS (Unicorn+Sexton). The second would replace Queens with COLUMBINES (Rook+Bear), Harlequins with CLOWNS (Bishop+Panda), Duchesses with CRINOLINES (Rook+Raccoon), Pantaloons with PANGOLINS (Unicorn+Panda), Governors with BUFFOONS (Bishop+Raccoon), and Balloons with BUNTHORNES (Unicorn+Bear). Columbine and Crinoline are feminisations of Harlequin and Pantaloon, and Clown and Buffoon are influenced by the Bishop being called a Fool in French and Greek - see also Commedia dell'Arte Chess.

My definition of the Lobster in 3d is perhaps questionable. This is the problem of move definitions giving identical results in 2d but different ones in 3d. The definition that I am taking is that the Lobster moves along diagonals, 2 steps on the forward ones and 1 on the rest - including same-rank ones in 3d.