This variant derives from odd-file 2d boards with the King on the centre file and different subsets of pieces either side, via corner variants - 2-player and 4-player - with the King in a corner and different subsets extending in different dimentions. I wondered how to extend the subsets from 2 to 3 for 2-player corner Ecumenical and Wildeurasian variants. In the first Bishops in one subset would correspond to Knights in another and Camels in the third, with Rooks the same on all. In the second the Rook+Bishop=Queen trio in one subset would correspond to the Cannon+Arrow=Tank trio in another and the Knight+Camel=Gnu trio in the third.

One approach was to add a third dimension, but I did not wish to add triaxial moves and sought a really good excuse not to have them. Then I thought, why not hollow out the 3d board, which assuming the one-foot-in-the-grave rule makes such moves impossible. That had the effect of subtracting a 6x6x6 board from an 8x8x8 one - 216 from twice 256. Thus the number of cells is easily calculated as 296.

I then realised that Pawn structure would be far more complex than even on a 2d corner variant, with the same players' Pawns crossing each other. Realising that each face would be initially occupied by one army, and the opposite face by the opposite army to boot, I decided to label one pair of opposite faces Blue, one pair Red, and one pair Yellow for clarity. Each army initially occupies one face of each orientation colour. An exception is that in a 4-player version that I devised later on, in which a different pair of armies share each face.

Since I created this page Kuyan Judith independently created another using the same board, one of the Cube Surface Board Chesses, though with only FIDE pieces. 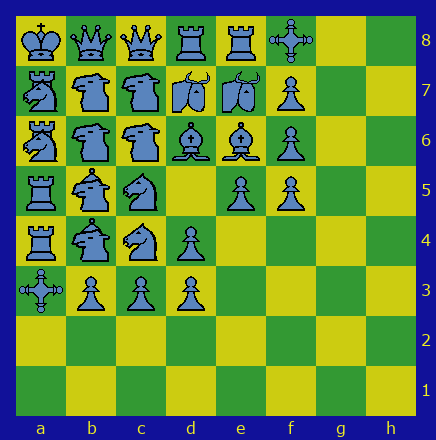 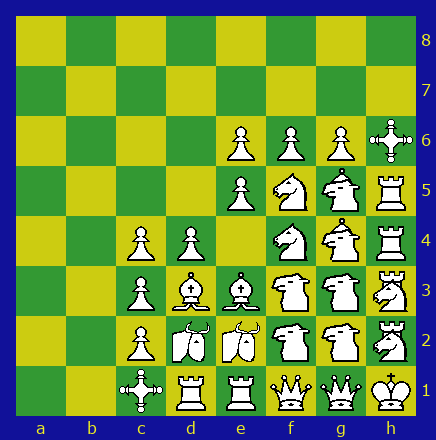 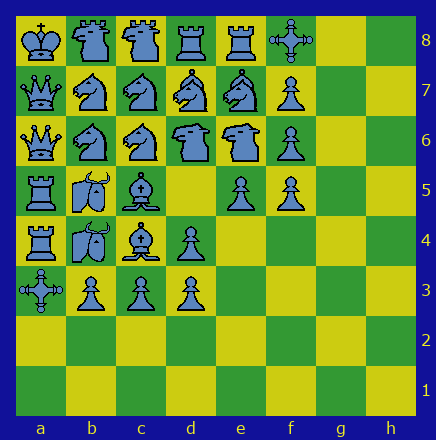 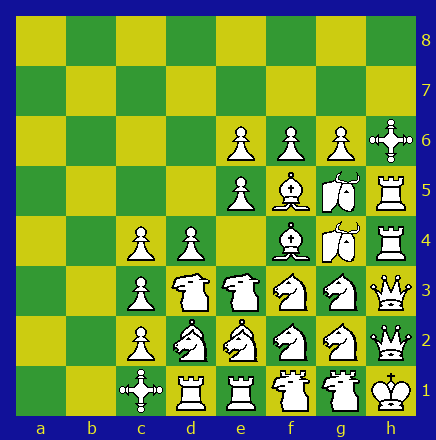 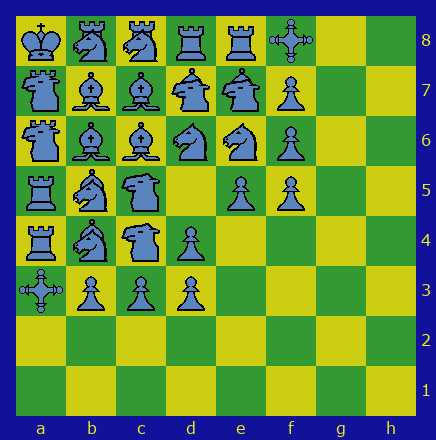 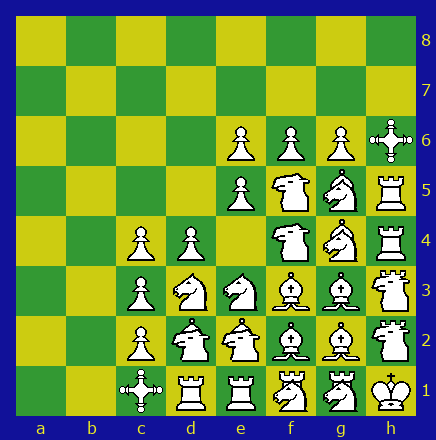 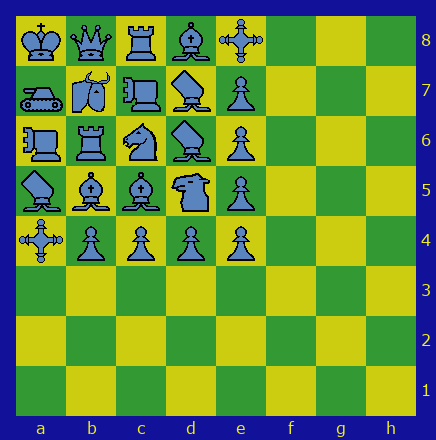 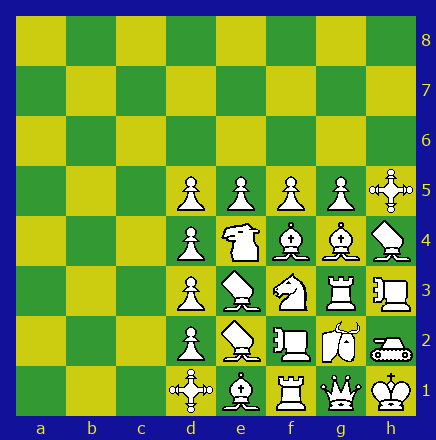 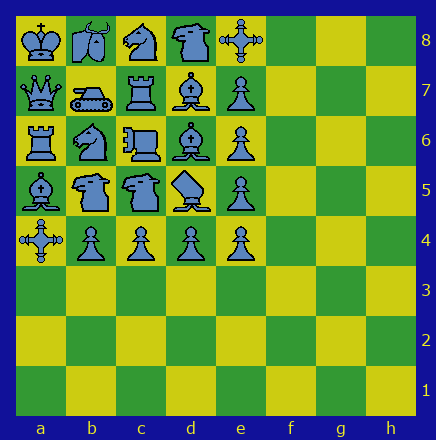 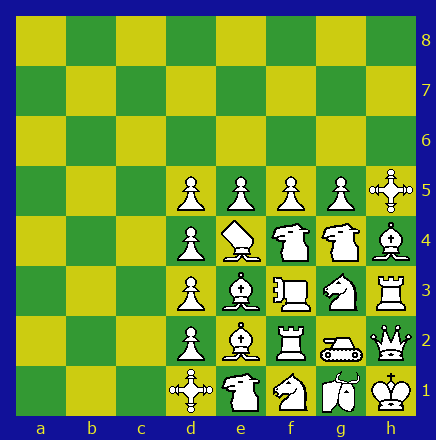 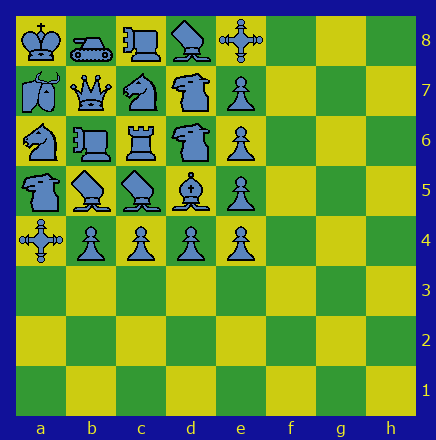 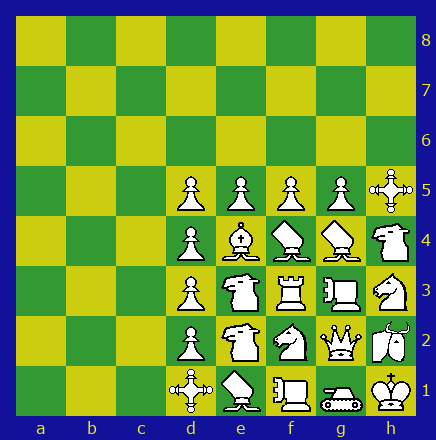 4-player MT³, each face for a different pair of players and kind of Pawn 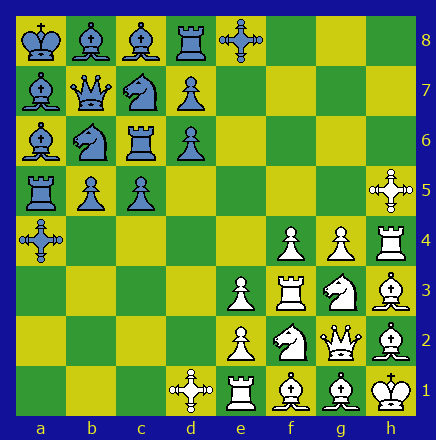 Pieces have their usual 2d moves. They cannot move from the interior of one face to the interior of another in a single move, but must do so in a minimum of two moves, via the edge where the faces intersect.

All Pawns have an optional double-step noncapturing move on their array face. In the Wildeurasian version, and for the furthest-back pieces in the Ecumenical one, this can be their first or second move, allowing maintenance of Pawn chains until they turn the corner. A Pawn making a double-step move can be captured En Passant by an enemy Pawn, which as we will see must necessarily be of a different Face colour.

Castling is allowed in the Ecumenical variant with any Rook, and in the 4-player one with the Rooks sharing an orthogonal with the King. The King always moves 2 steps with the usual restrictions. As with my 2d 2-player corner variants, it is less likely to be of use than in a face-to-face variant, but it is there all the same.

Pawns reaching the enemy counterpart of their own face cannot move within that face unpromoted, which is why they cannot capture an enemy same-face Pawn En Passant. They must immediately be promoted to any other capturable array piece.

In 2-player subvariants Check, Checkmate, and Stalemate are as usual. In the 4-player one a player is Checkmated when their King is threatened by the player about to move. That player's pieces are removed from the game, which continues with the Checkmating player's move.