These variants combine the ideas of my Tunnelchess and Twin-board Ecumemical Chess. The idea first struck me when I noticed that 32 can be seen as 2+(2*15), the first 2 representing a ruler and consort and the 15 representing the 15 possible pairings of 6 simple pieces. An obvious set of simple pieces is the three radial linepieces - Rook, Bishop, and Unicorn - and the three oblique leapers with maximum coordinate 2 - 2:1:0 Knight, 2:1:1 Sexton, and 2:2:1 Ninja. As a simple piece on its own is rather weak in 3d I decided to dispense with these and have an army of just 2 each of the 15 2-component compounds plus an Emperor and Empress, protected on each side by a rank of 16 Coheirs.

Ecutunnel has the board as shown, with Black's besieged character countered by White's divided army. Ecumillstone has it wrapped round to join the two White back ranks, so that the two armies besiege each other. Ranks are numbered 1 (White Emp-eror/-ress) to 6 (Black Queens) and lettered q (Black Emp-eror/-ress) to v (White Queens) for easy indication of which way Coheirs go. The top row of files are lettered a-d, the next e-h, the next i-l, and the bottom row m-p. As with Tunnelchess files admp form the Frame, files bcehilno the wall, and files fgjk the Tunnel.

Coheirs are promoted to a stronger capturable array piece on reaching a starting rank for such pieces (necessarily enemy ones).

Check, Checkmate, and Stalemate are as in FIDE Chess

Could the pieces of the two back-to-back ranks be rearranged as back and front ranks in a simple, non-besiege Ecutunnel on an 8-rank board? The answer is yes, as only 11 of the total of 32 pieces aside have a Rook move. Here is one possible array for such a variant: 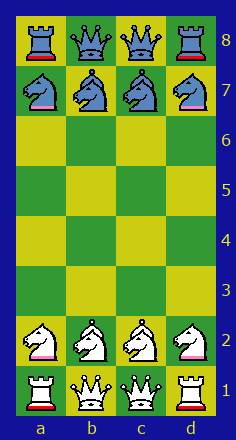 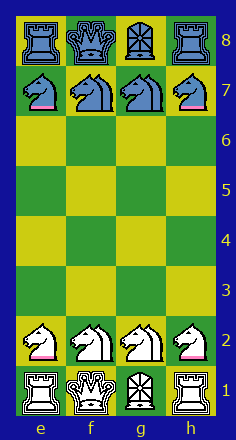 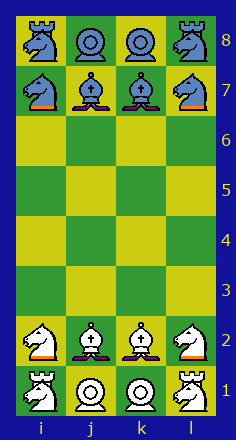 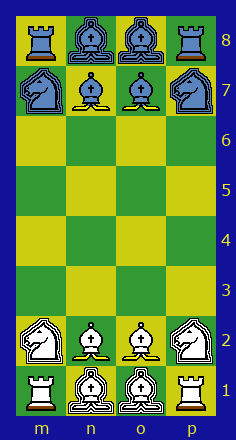