This variant is named after "Ã©sprit de l'escalier", meaning the witty ripostes that one thinks of long after they are of any use. It is a 10x10 variant that I thought of after the closing date for the 10-Chess contest. It is surprising that it never occurred to me before, as it is a fairly obvious extrapolation, or perhaps interpolation, from the largest-army variant of the Great Herd family but with pieces built up from the FIDE elementals. I am fairly sure that no-one else has thought of this particular variant. 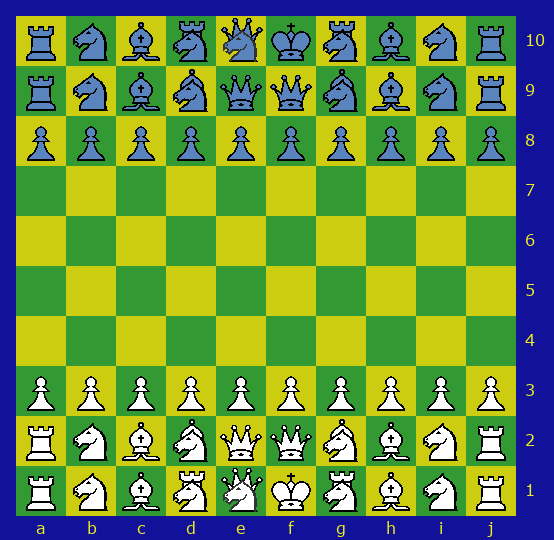 If a Pawn making an initial double-step move passes through a cell En Prise to an enemy Pawn, the latter can immediately capture the former En Passant as if it had moved only the single step. A Pawn's intermediate cell is always clear from whether it has captured an enemy piece and if so which one. A piece captured at the end of the double-step move is not recovered by the En Passant capture.

Castling follows my rules devised for Ecumenical Chess and reused in my actual 10-Chess entry Wildeurasian Qi. The King has not left the middle two files, the Rook involved has not left its own and the adjacent file, neither has left the back two ranks, and both are on the same rank with no intervening piece. They move toward each other within that rank, the King to the Bishop file and the Rook to the Marshal file. The King may not castle into, out of, or through check.

A Pawn reaching the far rank must be promoted, to any other kind of capturable piece. Note that promotion to anything but Ace is an underpromotion and most promotions are likely to be to that piece.