This is another game from a dream. I picture this variant as one being played in some distant desert land with large sand dunes and hot winds blowing. It is played within a small smoke-filled pub with slow moving ceiling fans that are badly in need of oil and balancing. The game is somewhat like chess, but could more accurately be described as a blend of Shatranj and checkers (draughts).

Win by capturing all of your opponents pieces and pawns, or by forcing resignation. Draws are possible.

Pawns - move only one space at a time. Capture as do western pawns, but no pawn en passant. On the 8th rank pawns must promote to a Knight , Desert Wazir, Desert Ferz, or even a Prince (the most logical choice in most cases). They cannot move again on the same turn that they promote. Thus a pawn promoting to a Desert Wazir could not immediately jump.

Desert Wazir - Moves 1 space orthogonally (+) without capturing. Much like an orthogonal kinged-checker piece would move. Captures only by jumping over enemy piece(s). It can make multiple jumps when possible. It cannot jump over friendly pieces or over empty spaces.

Desert Ferz - Moves 1 space diagonally (x) without capturing. Much like a kinged-checker piece would move. Captures only by jumping over enemy piece(s). It can make multiple jumps when possible. It cannot jump over friendly pieces or over empty spaces.

Knights - As in Western chess.

Princes - Move like Kings in Western chess. But they are immune from check. They can, however, be captured.

As with piece movements described above. Win by capturing all opponent's pieces and pawns. Note that there is no stalemate in this game. If a Prince has to move such that it is captured, then that is what must happen.

The following diagram illustrates movements and captures of the Desert Wazir and Desert Ferz. 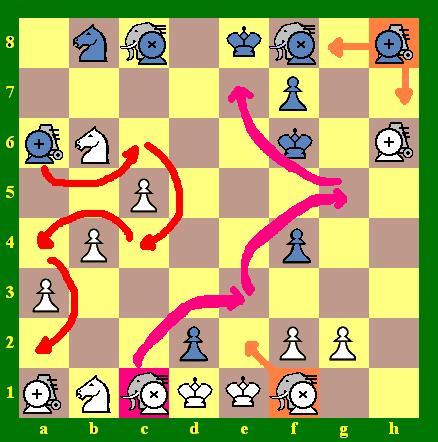 2)The White Desert Ferz on f1 can move to e2. It could not go to d3 this turn because it cannot jump any enemy piece on e2. It cannot go to h3 because it is not premitted to jump friendly pieces.

3)The Black Desert Wazir on a6 can capture a white Knight and 4 white pawns, if it was Black's turn to move.

4)The Black Desert Wazir on h8 can move to h7 or to g8. It cannot capture the White Desert Wazir.

REMEMBER - Desert Wazirs and Desert Ferz can only move 1 space when not capturing (they never capture by displacement). When capturing they must jump over the enemy piece.

5/14/07: After reading a comment from Abdul-Rahman Sibahi in regard to one or more Desert King pieces, and a Knight/mao piece... I had this idea: Oasis Ferz, Oasis Wazir, and Oasis Prince.

I hope to create a larger desert variant to employ some of these new piece concepts.

1/21/23 - Rules slightly updated after reviewing H.G. Muller's comments. a) pawn promotion to Prince is allowed. b) The "no stalemate" concept has been stated.