This page is written by the game's inventor, Doug Chatham.

Corral Chess is an entry in the 45 or 46 Cell Contest. Perhaps I'm taking the contest theme a bit too literally, since it is debatable whether this variant has 45 or 46 squares.

The rules for FIDE chess apply except as contradicted below.

The board has two levels. The main level has nine rows and five columns and the bottom level consists of a single square (the "prison") immediately below c5. White starts with eight Pawns (two each on b2,c2,and d2, and one each on a2 and e2), two Rooks (a1 and e1), two Knights (b2 and d2), two Bishops (b2 and d2 again), a Queen (c2), and a King (c2 again). Black has a symmetrical set of pieces on its side of the board.

Below is a picture of the main level. The unpictured prison is directly behind the square with the black border. 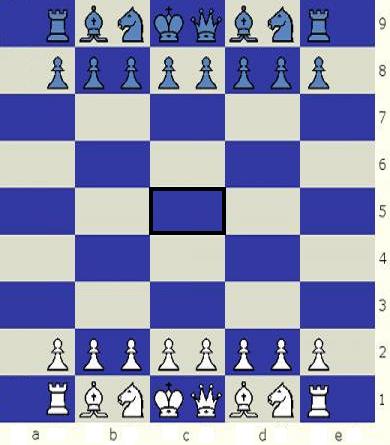 The Pawn moves like a FIDE Pawn, except that promotion occurs on the ninth rank rather than the eighth. (Yes, these Pawns can capture en passant.)

The Rook is a 4-Rook, able to move no more than four squares in a horizontal or vertical direction. (If I didn't shorten the Rook's range, the Bishops would be at a severe disadvantage due to the shape of the board.)

The Bishop is a 4-Bishop, able to move no more than four squares in a diagonal direction (due, of course, to the shape of the board).

The King moves like a FIDE King, and has the additional power to move from c5 into the prison. However, a player moving the King into the prison has lost the game.

Rewriting the rules so that there are only 45 squares is easy. (e.g., instead of a prison cell, we say instead that checkmate can occur only on c5.)