Chesimal: a "chess animal". An introduction to self-contained Autonomous Multi-unit Pieces [AMPs] on a 12x16 board, with 32 pieces per side. This game is playable with 2 chess sets appropriately marked.
Each AMP, or chesimal, is a unique color. The game has 8 chesimals total.
The sides are White vs Black, with the White side being the yellow, white, grey and orange chesimals; and Black being green, blue, red and purple.
Victory is by capturing both enemy royal Chiefs, or brain units. The royal chiefs are white and grey for the White side, and blue and red for the Black side.
A turn consists of each side moving one AMP/chesimal, with the white side moving first each turn.

June 27, 2015
This is a thorough re-working of the designs of the individual chesimals. It's meant to put a lot more zip into the game. The rules for Critters are found at the bottom of this page, and the set-up and link to a preset are directly below this section. As always, comments are invited, good, bad, ugly, or otherwise. 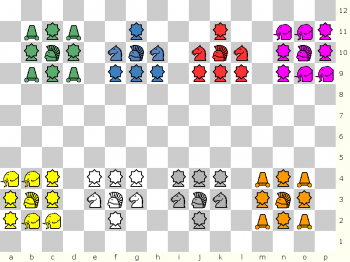 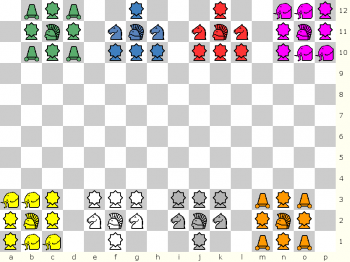 Knight - The royal guard unit. It moves as a standard western knight, one square orthogonally and then one square diagonally outwards; it leaps exactly 2 squares, landing on a square of different color than it started on.

War machine - The warmachine is an exclusive [see DHowe's Taxonomy] combination of dabbabah and wazir. It may step 1 square orthogonally, or leap 2 squares orthogonally.

Elephant - The elephant is an exclusive combination of alfil and ferz. It steps one, or leaps two, squares diagonally.

Guard - The guard steps 1 square in any direction, exactly like the king in chess.

Each chesimal has one leader [or brain] unit, the Chief, that activates the individual units that make up the chesimal. Any individual unit, to be able to be activated and then move, must be touching, that is, directly adjacent in one of the 8 surrounding squares, either a leader unit, a unit that is touching a leader unit, or touching a piece touching... in other words, the leader must be able to trace an unbroken line of friendly units to the unit being activated and moving, at the time of that activation and move. The piece may move into isolation as a result of its activation and move, but must be connected to the leader to actually activate and move.

Turns:
A turn consists of each side moving one AMP, with white moving first each turn. * The "White" side is yellow, white, grey and orange. * The "Black" side is green, blue, red and purple.

At least one unit of a chesimal must move.

Each and every individual unit of one chesimal may move, in any order the owning player desires.

Any individual unit must be connected to the leader unit by an unbroken chain of same-color units at the instant it starts its move. If the unit is not connected to the same-color leader/brain unit at the start of its move [on its original square], it may not move.

Each unit, including the brain, may only move once per turn. It may not "save" part of its move for later in the turn. No unit may move during the movement of another unit.

No moving unit may move through a square occupied by another unit, even if that piece just moved into the square or will move out later in the turn. Every unit moves as if it is the only piece moving in the turn.

A unit may move directly away from and out of contact with all other same-colored pieces.

Capture:
Capture is by replacement.
The capturing unit must stop in the captured unit's square.
Captures are made by individual units, not AMPs.
The AMP may continue activating and moving other of its units after one or more of its units has made a capture. The royal "pieces" may thus capture up to 7 enemy units in a turn, and the ortho and dia 9 each. When an amp's leader is captured, the remaining pieces in the amp are leaderless, although still colored. They just cannot move, but may be captured.

Victory:
The object of the game is to capture both of your opponent's royal chief units - the white and grey ones for the White side, and the red and blue ones for Black, not the entire multi-unit royal AMPs - before losing both of your own.

There is no castling, pawn doublestep, or promotion in this game.

This is an extension of Chesimals I, and is very similar.

The only difference is the movements of 3 pieces, the warmachine, elephant, and guard, have been extended 1 square, to give the chesimals more mobility.

Please note that some of these pieces are different than those in Chesimals 1, although the rules and preset use the same piece icons in each game.

Knight - The royal guard unit. It moves as a standard FIDE knight.

Warmachine - This warmachine is an inclusive [see DHowe's Taxonomy] combination of dabbabah and wazir. It may step 1 square orthogonally, leap 2 squares orthogonally, or do both, in either order. Thus, it can move up to 3 squares, leaping over one, which may be occupied, with no effect on either piece. It is a linear piece, it may not change directions while moving.

Elephant - This elephant is an inclusive combination of alfil and ferz. It may step one, or leap two, or step 1 and leap 2 squares, in either order, diagonally.

Guard - This guard slides 1 or 2 squares in any direction, linearly. It is a 2-square queen.

The same pieces need to be used again, as there is a limited number of pieces available in 8 or more colors. This is not an ideal solution, but it is the best available.

I thought I was done with this particular idea a long time ago, but apparently my subconscious didn't agree. When I noticed a game of Chesimals I being played, it got me to post a kibbitz comment that suggested a different take on these critters, and here it is in game form.

Brain unit. This piece slides 1 or 2 squares per turn. It may change direction between the 1st and 2nd square, so it can reach all 24 squares within 2 of its starting position.

Lightning warmachine, a double dababbarider. Moves twice as a dabbabah or wazir. It slides 1 or jumps 2 squares orthogonally, then may do either again. Thus it may move 1, 2, 3, or 4 squares. It must move in a straight line. Reaches 16 squares.

Oliphant, a double elephantrider. Moves twice as an alfil or ferz. It slides 1 or jumps 2 squares diagonally, and then may do either again. It also can move 1, 2, 3 or 4 squares. It must move in a straight line. Reaches 16 squares.

Knight. This moves as the standard chess knight, leaping over intervening squares to land 2 squares from its starting location on a different color square. Reaches 8 squares.

0] The basic rules of chess hold except where otherwise noted.
1] Players may move all, some, or none of their units each turn, subject to the rules governing movement.
1.1] Units are moved one at a time, with the active (moving) unit completing its entire move for the turn before any other unit may move.
1.2] Each unit's move must be legal at the time it is made.
2] Brain units are the only units the player may move freely.
2.1] Each brain unit may activate up to 24 non-brain units each turn. Brain units do NOT require activation to move.
2.2] All non-brain units may only move if, when each specific unit begins its move, it is within "activation distance" of a friendly brain unit that has not already activated 24 friendly units this turn.
2.3] No unit may move more than once in a turn.
2.4] A unit may be activated by different brain units on different turns.
3] Activation range for knights and jumping generals is 3 squares.
4] Activation range for oliphants and lightningwarmachines is 5 squares.
5] While each unit must start its move withing activation range of an available brain unit, it may move outside of the distance over which that brain unit or any friendly brain unit can activate it.
6] Victory. There are 2 possible ways to win:
6.1] Kill all the opponent's brain units in play.
6.2] Have a friendly unit occupying at least 3 of the green squares at the beginning of the player's turn, before any friendly units have been moved.

1] Different Critters: Using the same 28 pieces the game starts with, players may create any 2 critters they wish, as long as neither brain unit controls more than 24 non-brain pieces. No critter unit may start the game more than 3 squares from its brain unit. The 2 brain units must start in the same positions as shown in the preset - one each directly "behind" the green squares.
2] Additional units: Each player may take 1 or 2 more brain units and 2 additional knights, oliphants, and lightningwarmachines. If 3 brain units are used/side, the 3rd is placed on k4 for white and k17 for black. If 4 brain units/side are used, the 4 critters must be placed with white's brain units on row 4 and black's on row 17. Critters may not touch each other at set-up, and the 4 critters closest to the sides of the board must be placed with a side of the critter touching the edge of the board.
3] Growth: The green squares can be used for creating extra pieces. A brain unit must sit next to an open green square without moving for one turn. At the end of the turn, a friendly sliding general may be placed in that green square. Players may not create more pieces of any type than they started the game with. A maximum of 1 unit per turn* may be created.
* This may have to be changed to every 2nd, 3rd... turn if it proves to be too much growth.
4] Promotion: A leader that spends a turn without moving next to a green square containing a friendly sliding general that does not move either that turn, may replace the sliding general with any other non-brain unit.