(c) May 2006, by Gary K. Gifford This game "popped into my head" a few days after discussing â€œGoChessâ€ experiments with friend and Chess Variants Inventor, Joe Joyce. It was also inspired by my Catapults of Troy which involves the launching of pieces. That game, of course, drew inspiration from my admiration of Korean and Chinese Chess Cannons. Object: Checkmate your opponent, force your opponent to resign, win on time, or, if you are losing, obtain a draw if not possible to win.

How the Cannons work: LOADING: Simply move the desired projectile to the holding square (load status square). The Cannon's location, in relation to the projectile at the time of loading, is not relevant. The Cannons are empty at the beginning of a game. Cannons can Load (consumes 1 turn), or Move (consumes 1 turn), or Fire (if already loaded) (consumes 1 turn), or Unload (consumes 1 turn). Unload can be a waste of time, but, if you were going to launch a Wazir, and you realized you could instead, Launch a Pawn and promote it to a Queen in a few moves, then you could use: (a) a turn to unload, Each turn is a separate move. (b) a turn to load the Pawn (c) a turn to launch the pawn. Of course, in this scenario you could also simply launch the Wazir, then load the pawn on your next move. IMPORTANT NOTES: a) Once all your projectiles have been launched, you can no longer move your Cannon. b) If you think you got stalemated, check your Cannon. As long as you have a projectile in storage (or loaded in the Cannon) you can move the Cannon, or launch the projectileâ€¦ in this scenario Stalemate is not possible... {but it might be possible to stalemate your opponent, so be aware of his Cannon/Projectile status. c) CANNONS ONLY SHOOT HORIZONTALLY along one of these ranks: 3, 4, 5, 6. NO DIAGONAL SHOTS. d) Projectiles cannot be shot into a Cannon zone; i.e., the projectiles must land in rank 3, 4, 5, or 6 on the 8x8 section of the board. HOW CANNONS FIRE PIECES: A loaded Cannon can fire its projectile over 1 piece (and only 1 piece) friend or foe. It cannot shoot the projectile if the projectile will not pass over a piece. The projectile must land on a vacant squareâ€¦ they never land with capture; but can land to deliver check and/or block a check. Example of a Cannon firing follows, ranks 7 and 8 are not shown. Example of an opening where Black goes straight for a Cannon operation, suspending all â€œnormalâ€ chess moves: NOTE: In the game-courier pre-set you load Cannons by moving the projectile to a Cannon-Status Identity Square (at your right-hand edge of the board). You would also move the projectile off of that square when firing your Cannon. 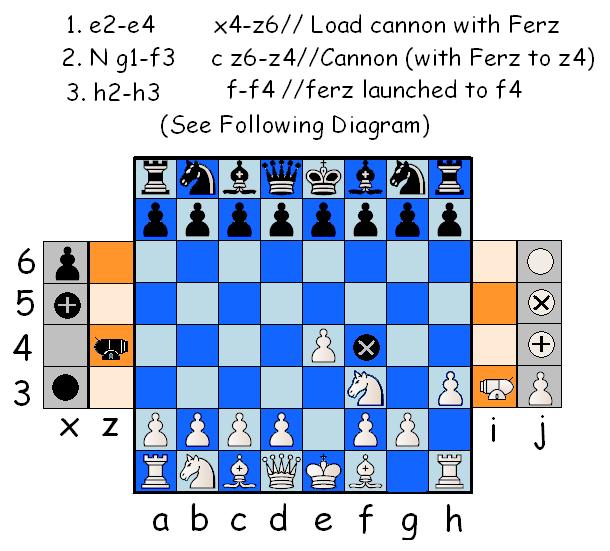