The pieces used in this variant are a back-formation from thoughts about the Stockbroker, a Pawnlike piece that I first introduced in Courier Leapale. It implied the existence of a "Stocklow", with the noncapturing and capturing nature of the moves swapped over; a "Stockpoint", using the directions of the Stockbroker's noncapturing moves for all moves; and a "Stocksaltire", using the directions of the Stockbroker's capturing moves for all moves (for the unprefixed pieces see my articles Man and Beast 1: Constitutional Characters and Man and Beast 2: Shield Bearers). I considered long-range versions of the latter two, "Stockwing" and "Stockhorn", concluding that their diagonal moves should turn on Frame files (those equidistant from a horizontal and vertical edge), the former to maintain the distance from the central four files and the latter to go from an inward to an outward progression rather than following a Wall. Note that Stockpoint+Stocksaltire=Stockbroker+Stocklow=Conqueror, the relatively conventional compound of Point+Cross+Saltire, but Stockwing+Stockhorn="Stockcountess" differs from the Conqueress by its deflected diagonal moves.

What about symmetric pieces? was my next thought. Could you have a "Stockwazir", "Stockrook", "Stockviceroy" or "Stockunicorn"? The last two were simple cases of matching the forward moves with backward ones, but the first two should have same-rank moves. It struck me that having all same-rank orthogonal moves would be wrong, as some would be like a Rook making a null move. Therefore I decided that they should rather have all same-rank diagonal moves and just the outward/inward same-rank orthogonals, the last being deflected outward again at Frame files in long-range moves. That made nonsense of the names, though, as the pieces would not be an enhanced 3d Wazir and Rook, so I decided to amend them. I came up with Stockbrook - from a tributary of the Brandywine in Lord of the Rings - for the long-range one and Stockfwazir for the short-range one.

The astute among you will already have worked out what the back-formed pieces are. The formal definition is that the Fwazir makes single-step moves as a Wazir between ranks and a Ferz within them, and the Brook makes straight line moves as a Rook between ranks and a Bishop within them. It seemed logical to give the name a more prominent orthogonal piece component as it is an unbound piece with the same number of directions as the orthongonal one, like that piece rotated through 45?. This variant develops the Brook, its rotated forms, and their compounds with each other, which make a fascinating study in piecemaking (sic).

Levels u and z: 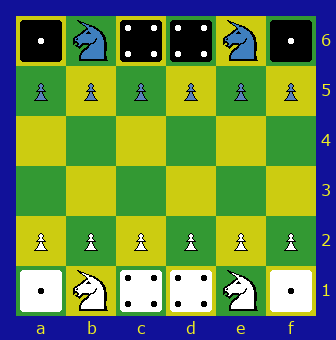 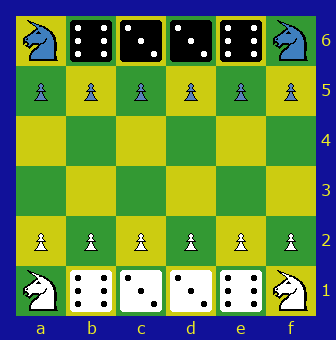 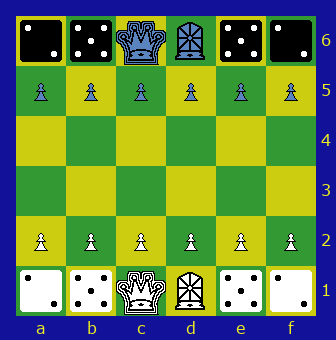 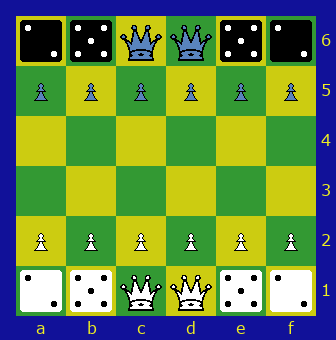 There is no initial double-step move and therefore no En Passant.

The Emperor may Castle or Cathedral with any piece exactly three steps away on its rank, it being each piece's same-rank move away from that piece. Both pieces move two steps toward each other. Usual restrictions apply.

Stockbrokers reaching the far rank must be promoted. They can become any other capturable array piece, subject to the player never having more than twice the array number of any piece type on the board.

The variant can be played with 4 Shogi sets using King for Emperor, Rook for Empress, Bishop for Queen, Gold for Unicorn, and Point for Stockbroker. The 6 kinds of Brook would be represented by the other 3 Shogi pieces, promoted and unpromoted.