When I created Nimrod Chess by swapping round bits of FIDE piece moves I noticed that I had given the variant one each of the four new pieces. This made the Knight, of which there were still two, something of an anomaly. I balked at the idea of swapping bits of the Knight move with other pieces, but wondered whether I could remove one Knight wholesale and still have a satisfactory game. The Queen's Knight was needed to initially cover of the Hawkress' Pawn, but the King's Knight merely duplicated both King and Queen covering the King's Pawn. So, removing the King's Knight file was quite feasible, with the bonus of the Huntress' Pawn being covered both by the Huntress itself, as in the 8x8 gamee, and by the Hawker, in place of the King's Knight's Pawn. As this would put the Queen on the centre file out of an odd number, which I would have preferred to be the King file, I decided to get rid of the Queen file as well. This left Knight and King files at the centre, as in Diana, but without Diana's disadvantages of (a) an unprotected Knight's Bishop's Pawn and (b) the opposite inconsistency to the aforementioned, of one Knight aside and two of each linepiece. I also decided to close up the ranks to 6 in keeping with Diana as well.

From removing the one Queen aside it was a simple matter to still allow promotion to Queen, and the "win-by-marriage" rule of Bachelor Chess, another 6-rank variant. It struck me as an afterthought that a Bachelor game could also be played with the Diana array, although I am not sure under what name. "Single-Knight Bachelor", perhaps, a pun on two meanings both of single and of bachelor. Anyway, back to the variant in hand. I decided not to bother with a corner-oriented subvariant of this. 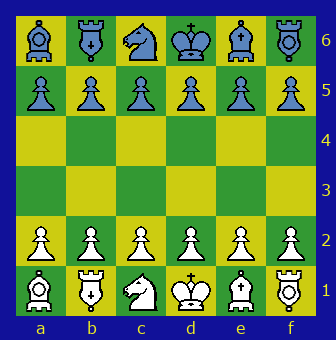 As this variant, like the non-Bachelor one, has a square board this too can have a corner-orientated subvariant, albeit with fewer Pawns: 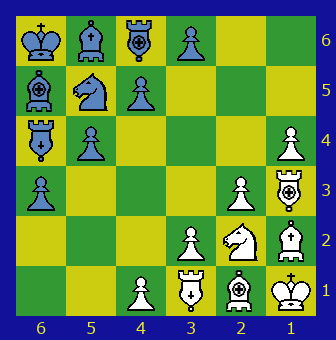 Pieces as they move in the corner orientation:

Pawns are promoted to any other capturable piece type in the same variant's array on reaching the far rank. They can also be promoted to Queen.

Check, Checkmate, and Stalemate are standard. A player can also win by a position where a Pawn promoted to Queen is adjacent to a King not in Check.