My modest variant CASTLE AND CATHEDRAL CHESS considered the idea of a diagonal version of Castling. In that variant the King could Castle with a Rook or Queen whenever they are 3 or 4 orthogonal steps apart, or Cathedral (as I termed the diagonal process) with a Bishop or Queen whenever they 3 or 4 diagonal steps apart. This got me wondering about a variant making Cathedralling by unmoved pieces both possible and worthwhile. Castling is valuable because it moves the King away from, and brings a Rook to, an area of the camp which it is generally useful to open up in order to deploy the Queen and Bishops.

That suggested a 4-player variant with 6x6 camps in the corner, a Pawn rank turning the corner at cell ff/fk/kf/kk, and the King at the turn in the "behind-the-Pawn" rank, i.e., cell ee/el/le/ll (aa-ap is the left edge, aa-pa the bottom edge, ap-pp the right edge, and pa-pp the top edge). This allows Kings to:
Castle "Kingside" with Rooks on be/bl/eb/eo/lb/lo/ob/ol;
Castle "Queenside" with Rooks on ae/al/ea/ep/la/lp/pb/pl;
Cathedral "Kingside" with Bishops on bb/bo/ob/oo;
Cathedral "Queenside" with Bishops on aa/ap/pa/pp.
To provide each army with Bishops on the opposite binding the obvious place to put these was ab/ao/ba/bp/oa/ap/pb/pa. I also decided to replace the middle five (out of 11!) Pawns with Yeomen so that they were to the opposite-colour army what the two remaining Pawn groups were to the adjacent-colour armies. That gave a nice tidy arrangement of 1 King + 11 FO Divergents + 8 linepieces = 20 pieces aside.

The next stage was to fill in each camp's 16 empty spaces. I considered the Carrera/Capablanca pattern of Knights+Queens+Marshals+Cardinals, or even reflecting the much larger board size with Camels+Queens+Canvassers+Caliphs or Zebras+Queens+Zebshals+Zerdinals (see my article Man and Beast 08: Diverse Directions). As four of each compound aside seemed excessive, I rejected this idea. Then I thought of Knights and Camels, or Zebras and Zemels. At the time of posting I had settled on having one subvarant with each pair, but since then I have consider two more subvariants. One has the Catapults (Knight+Trebuchet) and Campers (Camel+Tripper) of Nearlydouble Chess and its offdshoots, and one the Gazelles (Knight+Zebra) and Cogazelles (Camel+Zemel) that I recommend for Nearlydouble version of any Knighted-piece game. Either way there are four of each aside, the colourswitching leapers being between King and Rooks and the colourbound ones in a single block between King and Bishop block.

That left two four-cell blocks to fill. Ecumenical pieces, I wondered - Queen/Marshal/Canvasser/Gnu/2 Caliphs, or their Zebra equivalents, aside? Well, I'd have to have, say, 2 Gnus and Canvassers aside as well, or two empty cells, and it would ruin the symmetry. Instead I decided to use a third paired-by-direction group - Cannons behind the Rooks and Arrows in front of the Bishops, clustering radial pieces by direction. Thoughts of representation gave me the idea of including compound pieces - just those of two duals, as used in Wildeurasian Qi - in a communal Reserve. Allowing promotion to these and a "win by marriage" gives this variant its name - short for Bachelor, Cannon, and Cathedralling. 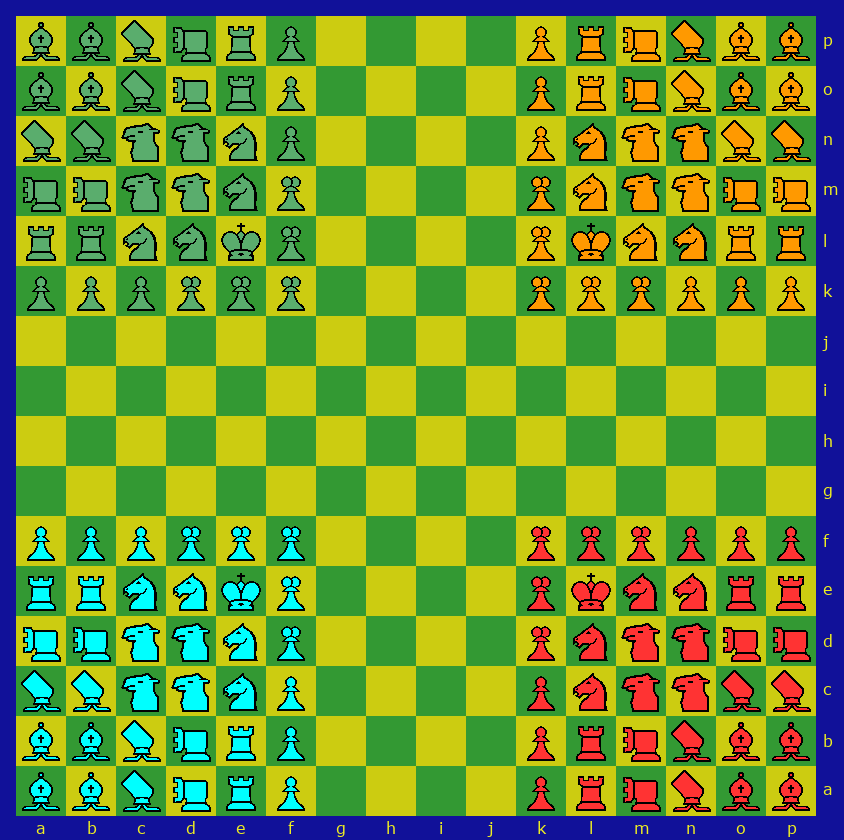 In theory 40 Pawns and 44 Yeoman could also be considered in Reserve, but in practice I do not expect these to get used up.

As many of the rules of this variant derive from my idea for representation, I will start with that instead of putting it in the notes. The variant uses 4 sets of the usual equipment (board and pieces), plus removable player-loyalty markings in red, orange, green, and blue. These could be string tied round the pieces, blobs of plasticene stuck on them, or caps or robes of cardboard, but not painted midriffs as these are not sufficiently temporary. These leave the actual piece colours free to represent different types of move, so that the sets need not even be distinguishable but could be four identical sets.

Linepieces, 8 aside, 32 on board altogether, 8 in Reserve:

Variant 2 leapers, 8 aside, 32 on board altogether, 8 in Reserve: For the above pieces this variant substitutes the ZEBRA, which makes 3:2 leaps; ZEMEL, which makes 5:1 leaps; and ZEBU, which makes both.

Variant 3 leapers, 8 aside, 32 on board altogether, 8 in Reserve: For the above pieces this variant substitutes the CATAPULT, which makes 2:1 and 3:0 leaps; CAMPER, which makes 3:1 and 3:3 leaps; and ACHATES, which makes all four.

A King on its starting cell may Castle with any unmoved Rook of its own army, Cathedral with any unmoved long-diagonal Bishop of its own army, or do either with either becoming a Queen through capture 3 or 4 steps away from the King in any radial directtion. In each case the King moves two steps toward the linepiece, which moves to the cell halfway between the King's start and end cells, both through otherwise unoccupied cells. This last rule keeps notation unambiguous: ee-ec is with the eb Rook if it is there, with the ea one only if eb is empty. The King may not Castle or Cathedral into, out of, or through Check. The King can return to its starting cell and Castle or Cathedral again, but the linepieces must be unmoved since the start or since promotion.

A player whose King is en prise to the player about to move is Checkmated and their pieces go into Reserve. The Checkmating player then makes their move and play proceeds with the remaining players. The first player Checkmated loses and the player delivering the third Checkmate wins. An alternative way for a player to win is by bringing together a King, Queen, Tank, and Gnu of their army in any square of four adjacent cells. This is like the "win by marriage" of Bachelor Chess and Bachelor Kamil but scaled up for a much larger army. Finally a player can also win by moving a Pawn or Yeoman to a promotion cell when there are only Pawns and Yeomen in Reserve, which actually gets harder as players get checkmated.

Other possible substitutions warranting only mention as minor subvariants are: