Before joining this website, I've read many of the articles on games found here. Back then, it quickly became clear that there is more to chess than the orthodox game. I have enjoying the fruitful imagination of many inventors and the fine craft applied to their inventions so I decided to join the fun.

I wanted to do it too, so I took inspiration mostly out of the 2 popular games Cristian Freeling's Grand Chess and Daniel MacDonald's Omega Chess with it's advanced variation. For the promotion rules I used Fergus Duniho's Gross Chess rules because I liked the idea of 3 tier 3 rank promotion.

It is true that the orthodox chess is hard to be compared with, but it is my opinion that GM chess has become stale. So my declared purpose is to add contributions to the idea that a new kind of chess will eventually happen, more or less naturally.

This game is part of the apothecary series of games designed by myself along with apothecary chess-classic and future games on bigger boards.

There are 24 possible initial setups for this game. For the purpose of explaining the initial setup pieces are split in seven categories:

2. The average pieces are the two rooks of each player. They also have fixed start locations: a1 and j1 for white and a10 and j10 for black

1. from left to right Aanca,Griffin,Queen

2. from left to right Aanca,Queen,Griffin

3. from left to right Griffin,Aanca,Queen

4. from left to right Griffin,Queen,Aanca

5. from left to right Queen,Aanca,Griffin

6. from left to right Queen,Griffin,Aanca

4. The classic auxiliary pieces are the bishops and knights. They start on the 2nd (for white) and 9th (for black) rank, never on the a or j files in the spots left free by the major pieces. They too have two ways of arranging that could be represented by a coin toss. The first way is named bishops in (true,1,heads) and means the bishops are in the positions closer to the king (c2,h2,c9,h9 in grand classic, d2,g2,d9,g9 in winged). The second way is named knights in (false,0,tails) and means that the knights are in the above mentioned closer to the king position. So two coin tosses and one dice throw means 2x2x6=24 possibilities.

6. The joker (jester,fool) piece starts in pocket. It may be placed on the board as part of a first move of any non-pawn non-new auxiliary piece on the board by placing the joker on the just vacated spot by the just moved piece. This can be done up until turn 8 (including 8) by white and turn 12 (including 12) by black. This turn difference is done to balance the first move advantage.

7. Pawns fill the third rank of each player (3rd rank for white, 8th rank for black)

The starting positions are numbered from 1 to 24. A position is obtained through the formula 12xclassicauxiliary+6xstrong+dicethrow. For example below we have initial position number 14.Notice the jokers in the pocket squares. Also notice the pink brouhaha squares. 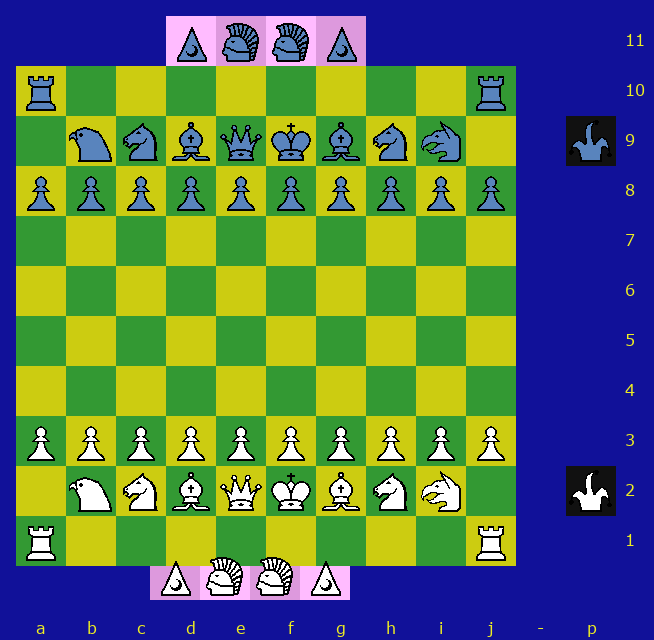 Wizard- classic camel (a (3,1) leaper i.e jumps to all squares 1 square far in one direction and from there 3 squares far in the orthogonal direction) and ferz(steps one square diagonally) compound

Pawns - orthodox chess pawns on a 10x10 board from the point of view of movement and capture but that may promote starting the 8th rank according to the above mentioned piece categories provided that the reserve holds the piece required. Pawns may promote to any auxiliary piece on the players 8th rank, any auxiliary piece or average piece at the 9th rank, and any piece at rank 10. In the reserve there are initially 1 queen, 1 rook,1 champion and 1 knight and later on enter any of the player's lost pieces.

King- Not in a category; an orthodox chess king on a 10x10 board- the royal piece of this game

1. win - obtained through checkmating your opponent which worths 1 tournament point

2. advantage - obtained through stalemating your opponent or having at least 4 points in the points counting process (see bellow) worths 0.75 tournament points

3. draw - obtained through double bare kings or through having at most 3 ahead points in the points counting process (see bellow) worths 0.5 tournament points

4. disadvantage- when your opponent finishes at an advantage still worths 0.25 tournament points

5. loss - you got checkmated

At any time players may give up (loss) or convene at a draw or advantage/disadvantage.

1. The 100 moves rule takes charge (akin to the 50th moves rule of orthodox chess but after 100 moves) i.e. 100 moves have taken place and no captures or pawn pushes happenned.

2. An position has been repeated three times.

When point count occurs points are awarded to each player for each non king piece the player has on the board. A strong piece worths 9 points. A average piece worths 6 points. A auxiliary piece worths 3 points. A pawn worth 1 point. If one player counts at least 4 more points than it's opponent then the game end in an advantage for him. Otherwise a draw is awarded to both players.

There is no castling in this game, but the king may jump once from the initial position to c1,d1,h1 or i1 for white or c10,d10,d10,h10 for black. The en passant rule is as usual only that pawns have the double move from the 3rd to the 5th player's rank. The 50 moves rule becomes a 100 moves rule. The brouhaha sqares disapear afeter they have been vacated. Captures may happen on the brouhaha squares and that preserves them.

During the development of the game I kept in touch with several people including Greg Strong & H.G.Muller. Especially to Greg and HG I owe a debt of gratitude for providing software that help me develop the game concepts. I have used HG Muller's Fairy-MAX to measure properly piece values, although that is still in the beginning phases. I have used Greg Strong's chessV in order to implement the weirder promotion rule and the joker piece, and test a bit the game. I thank you all for the contributions.

It worth saying that this version is not the first version of the game. Initially the knight had an only move zebra enhancement. This was replaced by the threeleaper and alfil just move enhancements and the zebra enhancement was passed to the apothecary chess-classic game. Also initially there were no brouhaha squares. They were introduced because of the damage that was easily done by the wizard in the opening. Also their introduction left the rooks connected.

For the purpose of notation I recomend the following letters: K-king;Q-queen;G-Griffin;A-Aanca;R-rook;J-joker;N-knight;C-Champion;W-Wizard;B-bishop and P-pawn