This page continues the interpretation of the hex geometry introduced in AltOrth Hex Chess, extending it to analogues of variants using non-FIDE pieces. The Puppeteer terminology of my first AltOrth offshoot, Ringworld Chess, is much in evidence.

I fast-tracked this page slightly. Normally I would leave a 2-week gap between variants, but I posted this on the first day of the 202nd Decade as I would be busy afterwards uploading my Man and Beast makeover with references to the changes of 2009-10 stripped out and pentagonal-cell geometries added. Since this page I have added a page of still more complex variants with Hopping and/or Crooked ones.

It took a while to choose a full set of images to use to replace the old Ascii Art diagrams, even with this set, but I eventually managed it by interpreting "Crab" as "incomplete" (the Crab being an incomplete Knight) in conjunction with orthogonal-piece images for Forepieces and their diagonal duals for Hindpieces. I have also reordered the variants in the order that I settled on images for their pieces.

AltOrth Hex Courier is an analogue to somewhere between Courier and my offshoot Courier Kamil. It has one aside of (a) two-step pieces in each of the two odd-file Dabbaba bindings and (b) one-step ones for the entire board. Even files have no array two-step pieces. 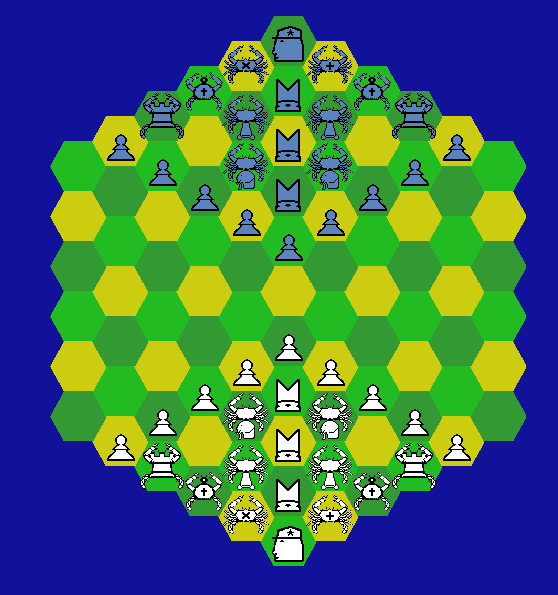 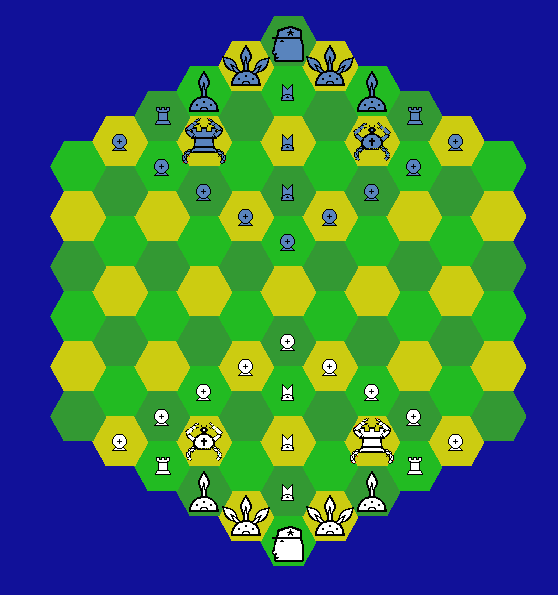 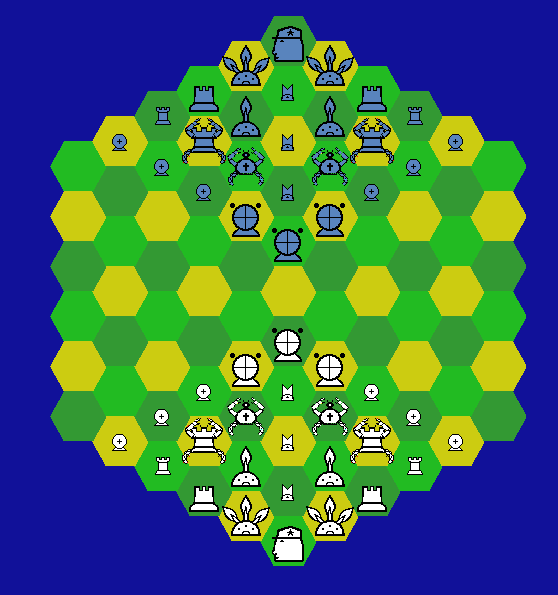 Wingreservist Rimmed is an analogue to my Mitred Framing, with the basic AltOrth camp pushed forward and forward-only pieces stuck in behind it. It can be played in the simple, Frontofhouse, or Wingregi style. Contrast with the more conventional hex analogue Horn Rimmed Hex, from which it takes its name, although both skew some colourbound pieces to avoid six pieces aside in the centre rank. 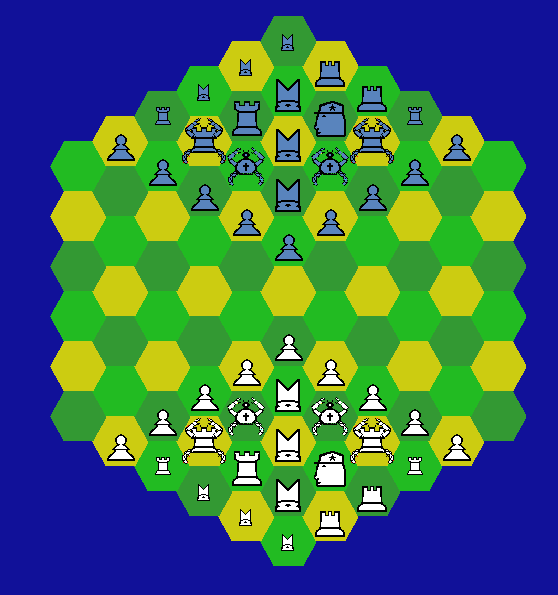 Grand AltOrth Chess is an analogue to Knighted-piece variants. It adds two each aside of the Rook, Forevicereine, and Hindvicereine as not enough pieces are suited to replace Migrants and once two or more piece types are added to an already full 4x4 hex camp it may as well go to 5x5. 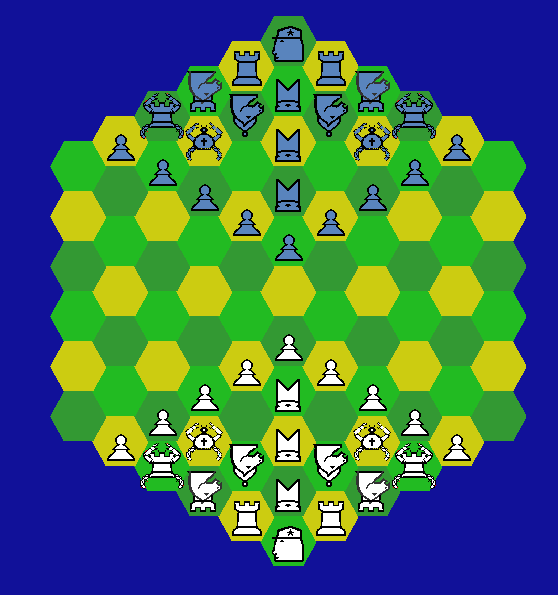 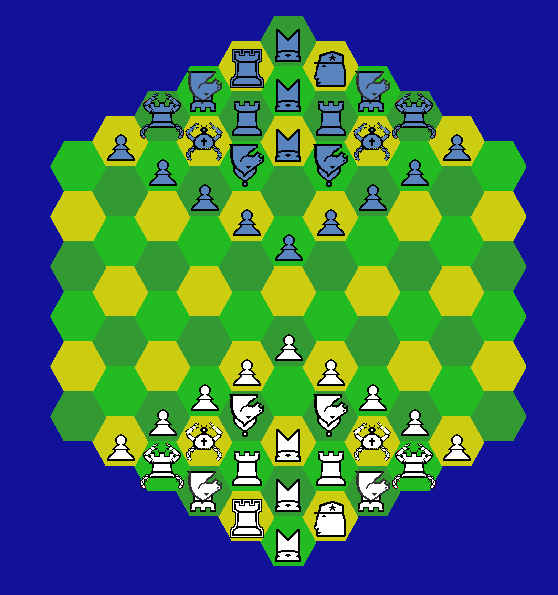 Tutti-Frutti AltOrth is an analogue to Tutti-Frutti Chess, which has a Bishop for only one binding. This quirk gets transferred to the Viceroy as Knight analogue, but as it is so weak a piece I double it up to fill out the camp. 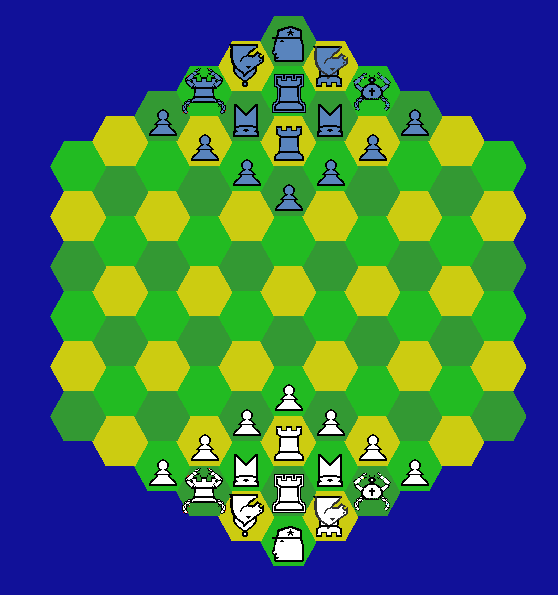 AltOrth Hex Overkill is an analogue to my Overkill Chess, substituting two aside of the "compound" pieces - including Rooks in this case - with none of the "simple" ones. 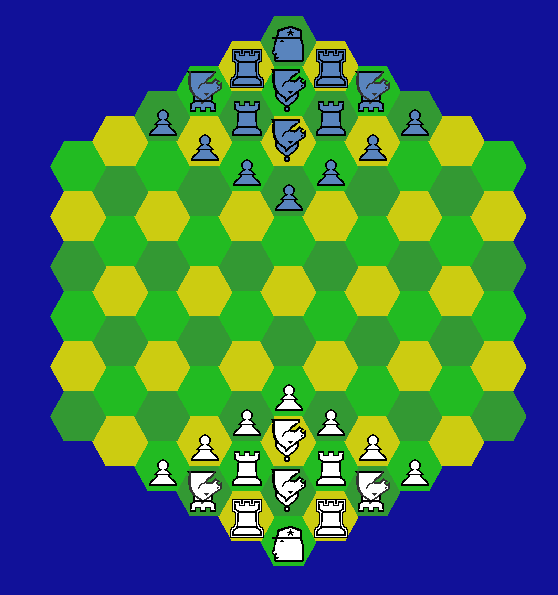 AltOrth Hex Manners is an analogue to Modern Manners, my offshoot of Duke of Rutland's Chess. There are two aside of each Crowned-, and one aside of each Knighted-, -piece analogue. 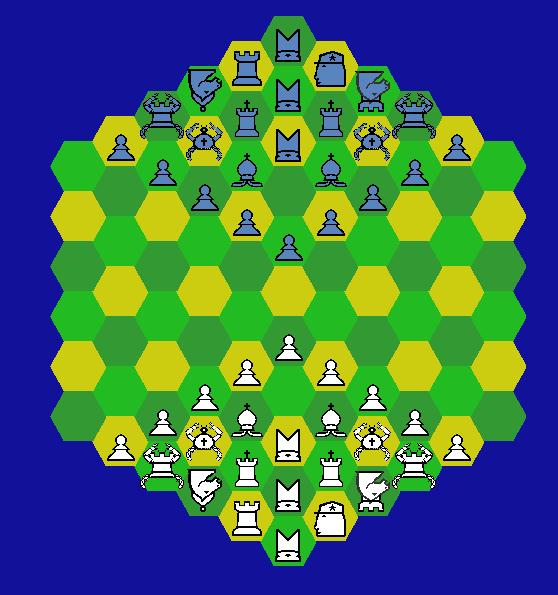 Knighted- and Crowned-piece analogues, additional to the Vicereine:

In the 2-player subvariants play alternates between the two players. In the 3-player one it progresses anticlockwise.

A Migrant on any Migrant starting cell of its camp may make a double-step noncapturing move, regardless of whether it has already made one or more moves to get there. It may however be immediately captured En Passant by an enemy Migrant poised to capture it had it moved only a single step.

Promotion and return from capture are as follows:

In 2-player subvariants Check, Checkmate, and Stalemate are as usual. In 3-player ones a player is Checkmated when their General is threatened by the player about to move. That player's pieces are removed from the game and the remaining players then alternate moves starting with the Checkmating one.