The idea for this variant came about not long after a comment on Magna Carta Chess was posted. The suggestion was made that a Duke piece might be included on King John's side in allusion to his claim to two French dukedoms. It occurred to me that the Baron, a term commonly used for those who forced John to sign, should be the obvious corresponding piece on the other side. I gave an enlarged version some thought but decided to defer it until 2015 to mark the eighth centenary of the signing (in the original mediaeval sense, by means of a seal) of Magna Carta at Runnymede.

The Duke and Baron as defined at the start of my Man and Beast: series of piece articles both use a root-3 diagonal. The Duke can exist on a 2d hex board, but this would not be suitable as neither the Baron nor most of the pieces used in the original Magna Carta Chess can. The Baron required a 3d board. Fortunately both Duke and Baron move just one step at a time, so the 3d element could be minimised to two levels.

As the Baron has powers to triangulate that the Duke lacks I decided that this so balanced things in favour of White that I should free the Queen from royal restriction and make it a normal capturable piece. I wondered about putting royal restricions on the Duke but decided against as I term a royally-restricteed Duke a Grandduke, which means a duke ruling in his own right with no king above him (as in Luxembourg) whereas in his own dukedoms John recognised the French king as sovereign - it was another century and a quarter before the Plantagenet dynasty contested the French throne for themselves.

I decided to retain eight ranks to represent eight centuries, but give each rank ten cells to represent the ten decades in each century. This fits in well with having two each of the new pieces. The arrangement of the pieces is strongly influenced by Raumschach. This ensure that (a) each player starts with a Bishop on each binding, (b) pieces with a Rook move are well spaced out, and (c) the Dukes initially flank the King to indicate their references to the same individual. 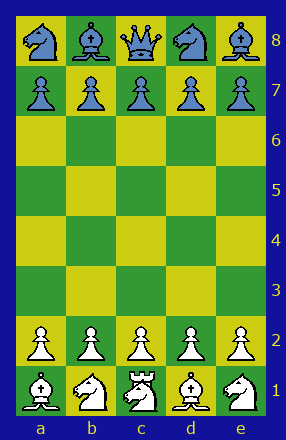 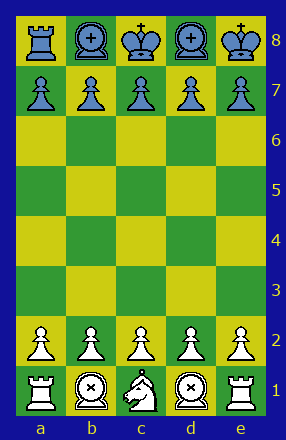 The usual images represent the standard FIDE pieces, extended to a cubic board but still unable to move in all three dimensions at once in one move. Black must retain at least one King.

As the two armies are different, it makes a diffence who moves first, and it is White who does so.

Pawns have an optional double-length noncapturing initial move. The halfway square must be empty. A piece making such a move may immediately be captured En Passant by an unpromoted enemy Pawn but by no other piece. like all captures by Pawns, En Passant captures can be either horizontal (moving forward and sideways) or vertical (moving forward and either up or down) but never in all three dimensions.

A Pawn reaching the end of a file must be promoted. It can be promoted to any other piece in the array, include spare restricted pieces.

Victory is by two means. Either player can win by Checkmating a King, Marshal, or Cardinal where there is no other piece of the same type on the board. There may be any number from 1-11 of the Checkmated player's other restricted piece. Black can also win by "royal fork", simultaneously threatening both Marshal and Cardinal when both are the only one of their kind and no move can remove both threats.

In November 2015 I moved away from the Runnymede district.

One possible physical represention for the entire set is by a single Shogi set as follows:

Despite the riparian setting the board is not divided by a Xiang Qi River. This is because Runnymede is specifically on the south bank. Indeed the nearest bridge to the site of the Magna Carta was built in the 20th Century.

A note on whether Magna Carta was "signed" or "sealed": Both verbs refer to things that can be done using a seal. To "sign" a document is to mark it either with the "signature" of images on their seal of they have one, which King John certainly did to Magna Carta, or to write a modern "signature" of their name in their handwriting, which he did not. To "seal" a document is to roll up the document, with the writing inward, and mark it in such a way that it is closed up and cannot be read without breaking it open, and I have not managed to find out whether this was done to Magna Carta. So it may or may not have been sealed but was certainly signed. As there are hills immediately to the southwest of Runnymede, "At the bottom" is indeed a valid answer to the question "Where was Magna Carta signed?"