This page is written by the game's inventor, Zhedric Meneses. This game is a favorite of its inventor.

Hello. This is the 1st variant I have ever made. I made this chess variant after surfing through this website thinking that I could make one. I was motivated to make this by several games in ChessV. I tried to make this at least fun and if I failed, at least I learned something. The 16 part in 16Chess is based on how many squares royal pieces move at most. 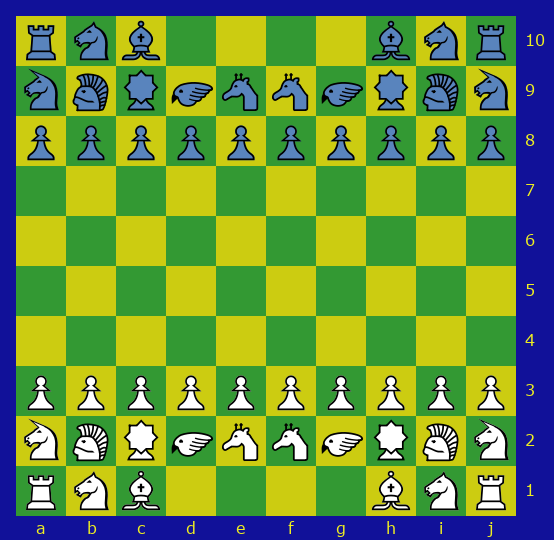 * - Major Piece(Best Term I can think of)

The Rules are the following

1. Before the game starts, Each player chooses 4 of the 5 Major pieces to be the royal pieces. The remaining major piece will be the move of the Guard. Example: White chooses Duke, Cardinal, Marshall, and Sovereign to be the royals. White's Guard will move like a Queen(This Variant's Queen not the Chess Queen)

3a. The Royals can be captured instead of being checkmated so that means the royal pieces can move into an attacking square but that's silly of course

3b. The Game ends if 2-3 royals are captured

4. You win the game if you bare the royals of the other player(Former Rule: The Game ends if the remaining pieces are royal. The Number of Royals you have left decides the outcome.)

6. Pawns may not promote into a captured royal piece

1. The Queen, Marshall, and Cardinal may jump on their Rook and/or Bishop moves

Pawn - O(for Soldier and S is taken by Sovereign)

Man - A(M is taken by Marshall)

Giraffe - I(G is taken by Guard)