Please do, it is a wonderfull game!

Never heard of Shogi, gotta give it a try sometime.

I still have some doubts with regard to the application of this rule. In particular, when a (checking) position occurs from which it is possible to deliver perpetual checking, but instead of continuing the checking you play something else. And then later, that position occurs a second time. Now you do continue the checking, and the opponent has no way to escape it, so you get a 3rd and 4th repetition of the position.

Does this now count as perpetual checking? Not all moves since the first occurrence of the position were checks. But all moves since the 2nd and 3rd occurrence are. In my engines I would only consider the moves since the previous occurrence. (Especially because it already terminates the line at the 2nd occurrence; if it cannot break from the loop the first time it goes through it, nothing will change by trying it the second time, except that you have less search depth left, which will degrade the accuracy of the evaluation.)

I would think that only considering the moves since the previous occurrence would be more in line with the spirit of the rule; you try to force a repetition by perpetual checking, and this should not be allowed. It is just that you started the checking a bit late, but now that you are at it, and can keep it up perpetually, why should that matter? When I asked it to a Japanese in connection with mini-Shogi, however, he told me this would not be considered perpetual checking, and thus produce a sente loss. (Which is a special mini-Shogi rule; in regular Shogi that would be a draw.)

Indeed, there is a rule against perpetual checking, as an extension of the repetition rule. The repetition rule states that if a position is reached for a 4th time, with same pieces in hand and same player to move, the game is no contest, whereafter colors are reversed and a new game is started. Players get to keep whatever remaining time they had, with a minimum time normally granted.

Repetition is already rare enough, especially at the amateur level. Very few instances of perpetual check repetition occur. Most people who see it as a possibility deviate the 2nd or 3rd time around, or avoid it altogether. I found only a couple actually pertinent videos on Youtube under the search 連続王手の千日手

While looking at the Japanese Chinese* Wikipedia article on Shogi, I came across this line:

Google translates this as:

This appears in the section called "Eat and Enter," which is about restrictions on drops. Despite the bad translations, the first three appear to be 1. You cannot promote a piece while dropping it. 2. You may not drop a piece where it would have no possible legal move. 3. A Pawn may not be dropped on the same file as another Pawn of the same side.

By process of elimination, the 4th might be the rule against checkmating the King with a Pawn drop, but the translation seems to be saying that a Pawn may not be captured immediately after being dropped.

Also, the translation of the 3rd seems to describe a different rule. It says, "Infantry can not be entered in the way of existing (not upgraded) infantry. This kind of foul is called two steps ." Since it would be in the way only if placed in front, this seems to allow the option of dropping a Pawn behind another Pawn in the same file. Maybe it is just a bad translation. The original says, "步兵不能打入於已有己方（未升級的）步兵的一路，這一種犯規稱為同筋二步。"

* I just noticed the zh in the URL. That means Chinese.

I just started watching a new anime about Shogi called The Ryuo's Work is Never Done! If this anime is to be believed, Shogi is much more popular among cute girls than I ever realized

I'm facing a problem: I want to open a game in which it is my move. Immediately I get an error saying I can't drop a pawn on a file where I already have a pawn.

Yes, I do already know that I can't drop a pawn on a file where I already have a pawn. Especially when I haven't even made any move.

Once each side has a little development completed, Shogi games are action-packed as a rule.

Shogi is an excellent game. Like Chinese Chess and western Chess, it probably evolved from the Indian Chaturanga. Despite being very different from Chinese Chess and from western Chess, it has too many similarities to them to be coincidence. The main evidence for the direction of evolution is that (1) it is a huge improvement over Chaturanga, and (2) its main differences from Chaturanga are not seen in other regional Chess variants. One of its main differences from other regional variants is its drop rule, which allows players to drop captured pieces back on the board as their own. Despite still having some slow-moving pieces like Chaturanga has, this rule greatly speeds up the game. because a captured piece can (with some restrictions) be placed on any empty space on the board. It also makes the game more dynamic. Instead the game being decided by a single-Pawn difference early in the game, there is a greater chance of material shifting between players, and the outcome depends more on the quality of play throughout the game. Shogi remains superior to Chess variants, such as Chessgi or Crazyhouse, that have added a similar drop rule to Chess. The reason for this is that its piece set is better-designed to work with the drop rule. In general, the drop rule works better with weaker pieces than are found in Chess. For example, the Chess Knight can be a formidable piece to drop, possibly forking several pieces, but the Shogi Knight can move in only two directions. Although it does include one Rook in the game, it has replaced the two corner Rooks with Lances, which move forward only. Also, unlike Chessgi and Crazyhouse, the Rook is the most powerful piece that may be dropped. In those games, you can drop a captured Queen. Shogi is also superior to Shatranji, my own attempt to apply the drop rule to the weaker piece set found in Shatranj. Besides the regular Chess Knight, Shatranji has a Ferz and some Elephants, which are both short-range diagonal moving pieces, instead of the Gold and Silver Generals. The two Generals, while being weaker than the King, both have the ability to change color. Also, like the Lance and Shogi Knight, they are more powerful going forward than backward. Having greater power for forward movement improves the offensive ability of pieces while weakening their defensive capabilities. Giving greater power to several pieces that reach the back three ranks also favors offense over defense. This favoring of offense over defense helps make Shogi more decisive and less drawish. Overall, Shogi is a fun, dynamic, and decisive game that can hold interest throughout the game, it is a huge improvement over Chaturanga, and among regional variants, it is my favorite.

It's appeared in Naruto, too. I don't know too much about it's involvement beyond Shikamaru Nara being really good at it.

The game of Shogi frequently appears in the Japanese anime Ranma ½. Here are a couple images from the first episode featuring Shogi. First, a closeup of the board. 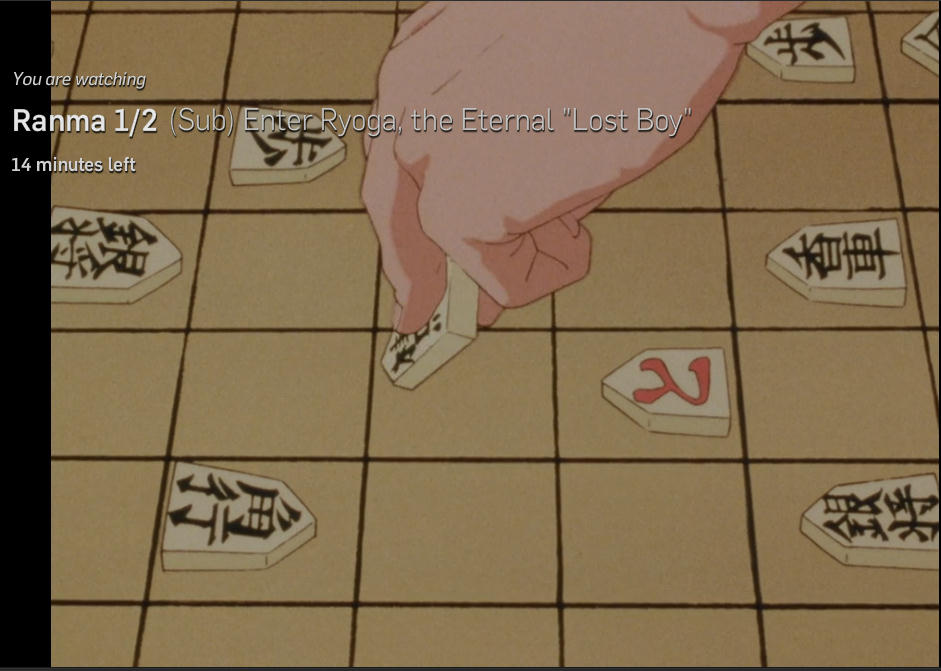 This scene shows the two characters who normally play Shogi together. They are the fathers of the two main characters, Ranma and Akane. The panda is Ranma's father, and Ranma can be seen in the foreground running from Akane's sisters, who want to make him wear girls clothing while there is no hot water to turn him back into a boy. 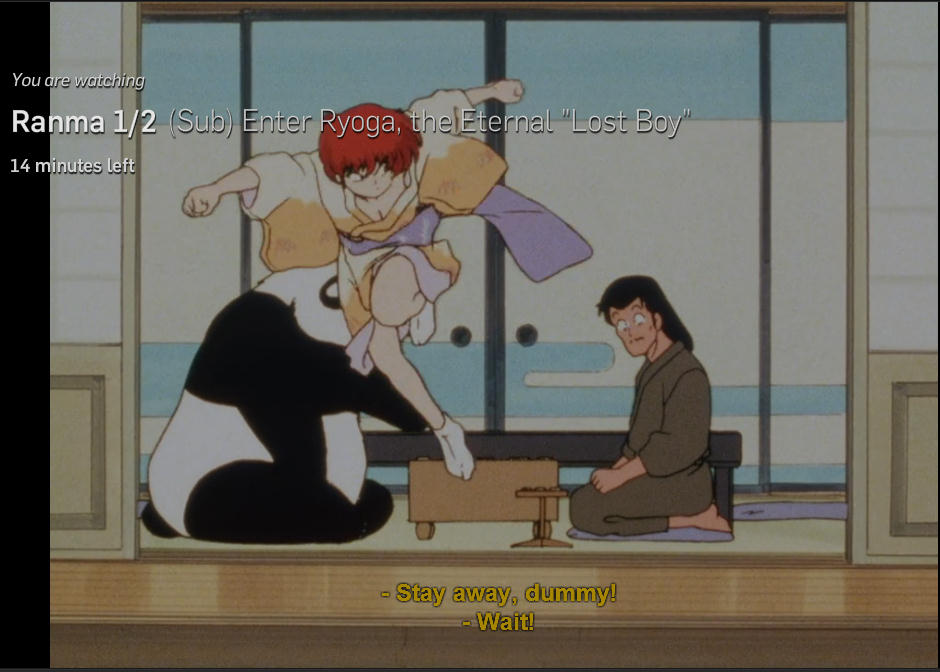 The following images come from an episode that focused on Shogi: 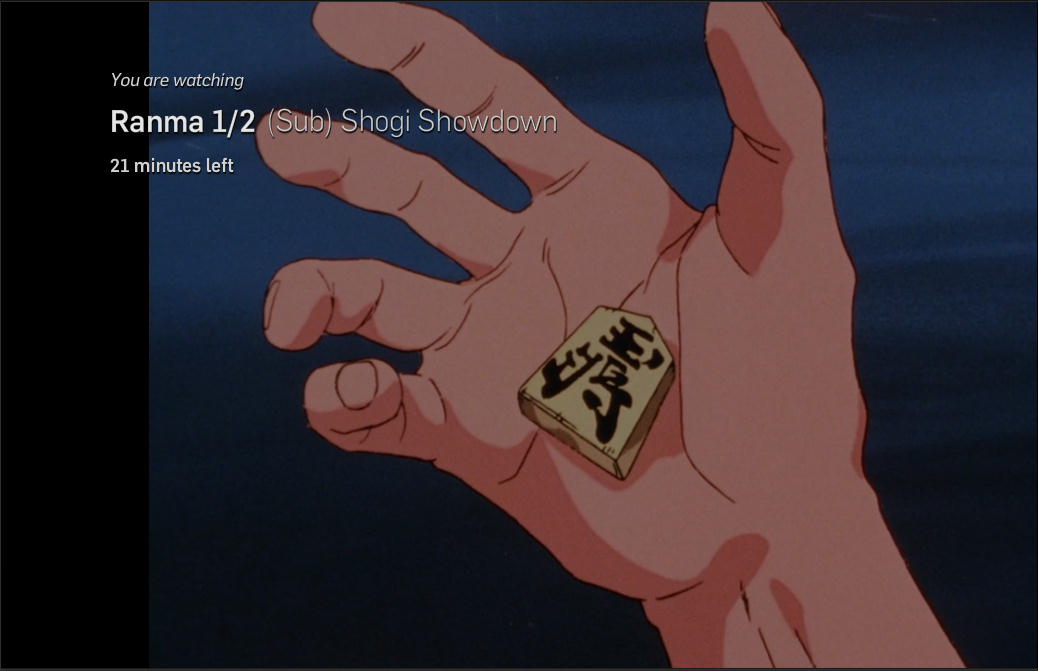 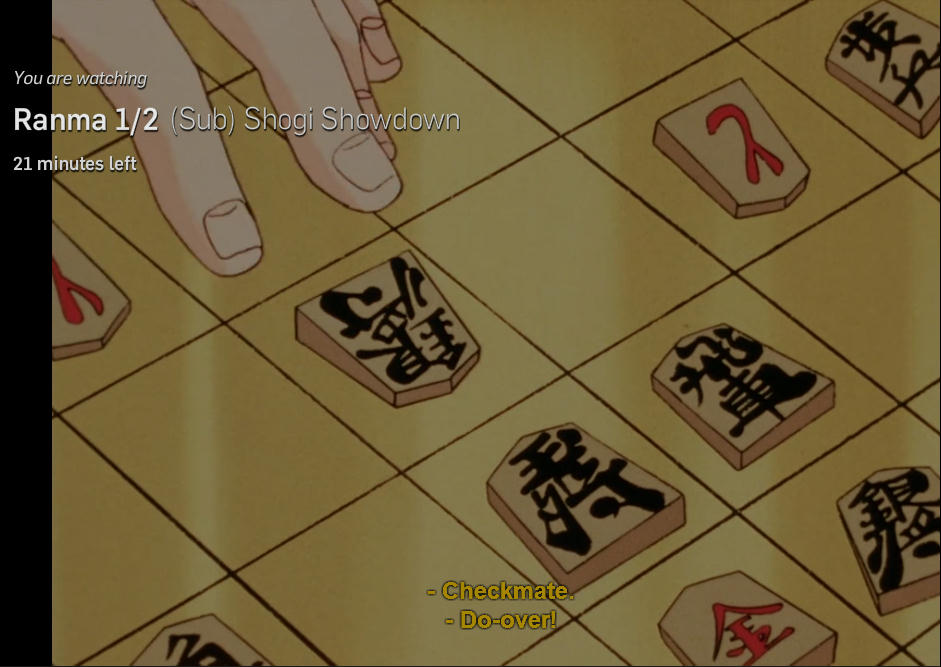 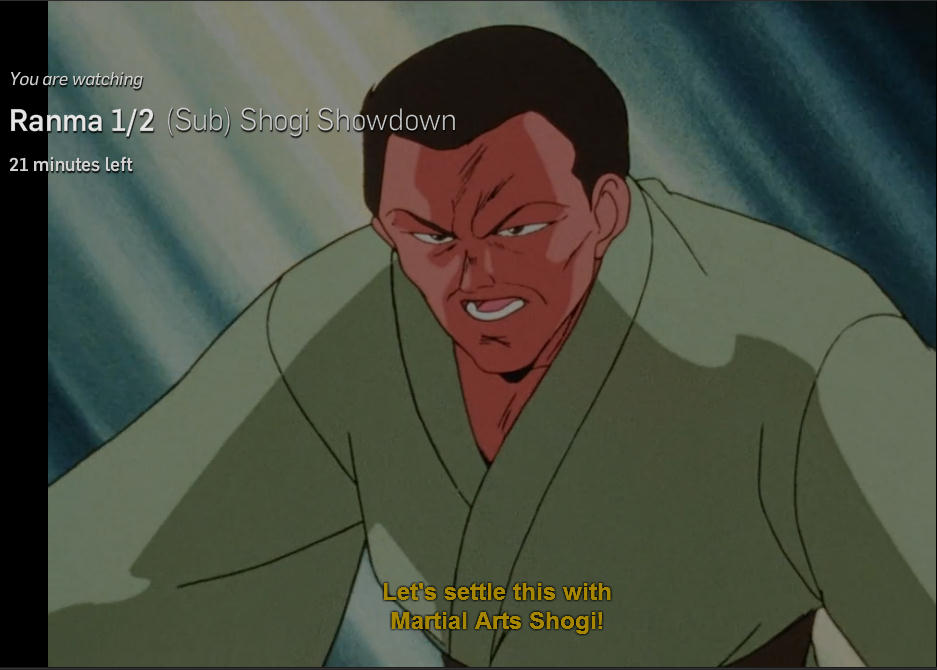 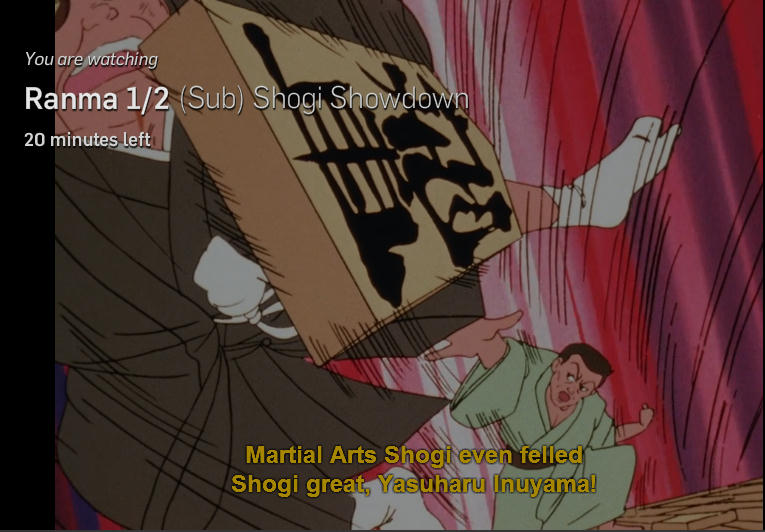 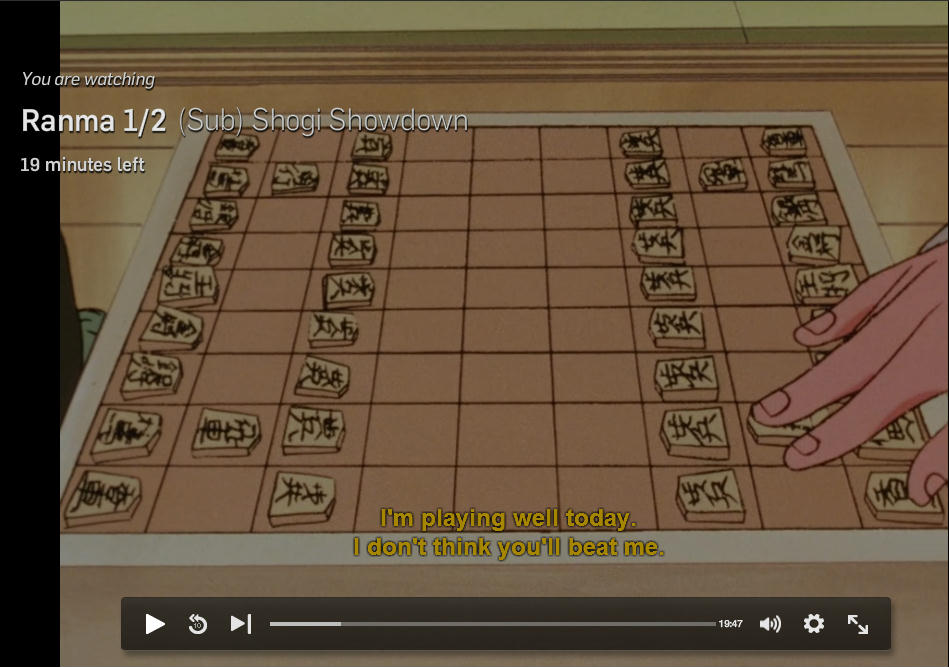 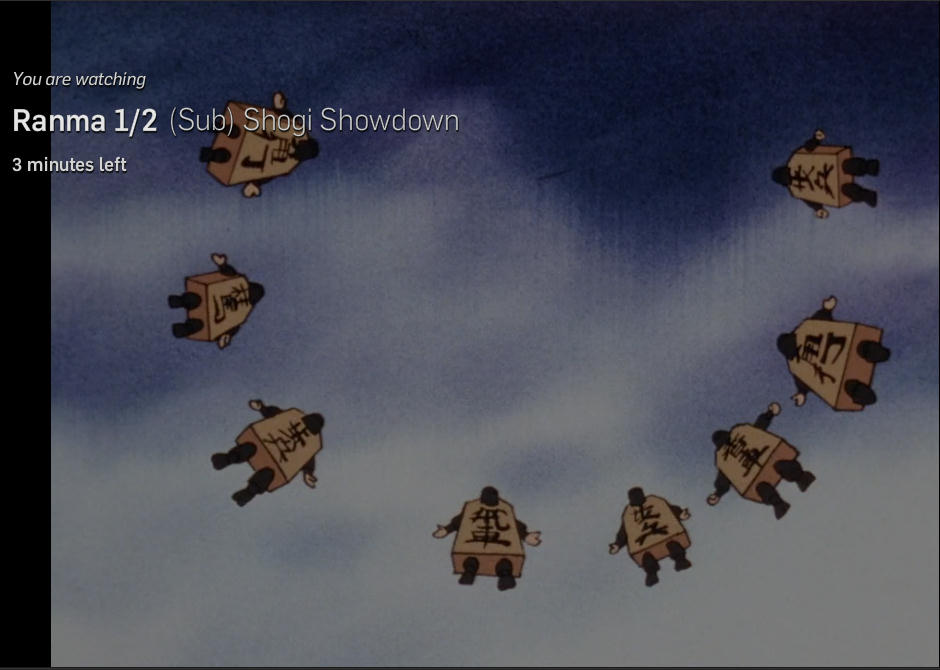 Finally, here is a shot of the two main characters, Ranma and Akane. 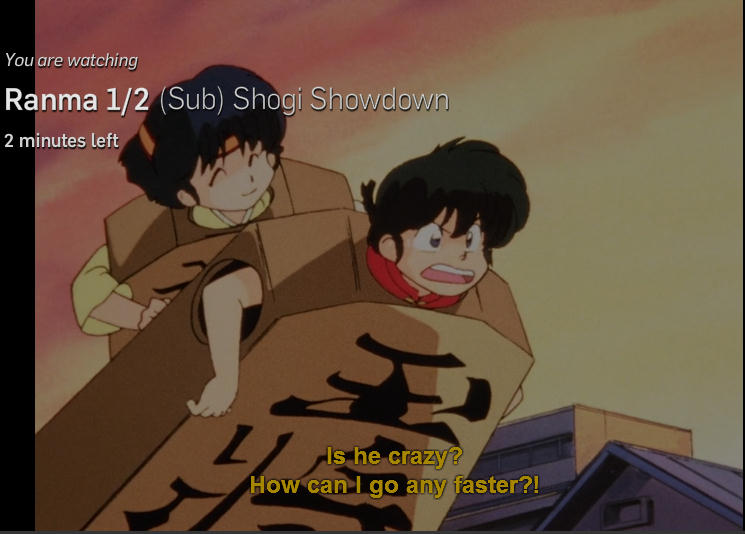 "First of all, my credentials. I am the only person in the world to have earned a 2400 rating in both chess and shogi, being an International Master in the former and an Amateur 5 Dan in the latter. I was once thought to be the strongest non-oriental player in the U.S. of Shang-chi (Chinese chess)..." GM Larry Kaufman on Shogi

I've already posted this Tsumi, but this time I'm posting it as a form with the solution included as one of the fields. I'll now work on adding an option to view the solution.

When a discussion goes off-topic, you can post a link to a page where it is on-topic and continue the discussion there, perhaps with a link and a mention there of the original context.

We, the editors, need a way to move off-topic comments to a different page. The comments here should be about Shogi, not how Winboard plays Xiangqi and and other non-Shogi games. If you want to discuss H. G. Muller's version of Winboard, the Fairy-Max page is a more appropriate place for it.