According to Pritchard's Encyclopedia, it was dissolved in 1984.  I tried some Google searches, English and Spanish, and didn't come up with anything.  Apparently, like many variants, it did died out once the inventor was no longer promoting it.

Does anyone now if there still is a world federation of modern chess?

i believe the personal invitation feature for game courier simply hasn't been working for some time now.

Only public invites are working.

Nonetheless: Thanks for all your great work on the website, Fergus.

I have a Modern Chess set, so I checked the official rules. They state that the game be played as it is set up. That is, one player has two bishops on white, the other had two bishops on black. The author seems to think this is better. The inventor permits, with prior agreement of both players before the start of the game, the "Adjustment of the Bishop".  Each player may swap one bishop with either neighboring piece, providing neither has moved.  This expressly forbidden in the official rules.

This may be a question with an obvious answer, but I was wondering if either side can commit to playing the whole game with two bishops on the same coloured squares (not including any promotions to a bishop). As there is nothing I can see that's against this possibility in the rules, I'm assuming it's allowed.

Interesting use of the BN piece type combo in a variant.

Actually another option would be to place the Minister where the King side Bishop usually stands - since it is also a Bishop you wouldn't be changing anything - then you would have the opposite coloured Bishops.

You then put the King side Bishop where the Queen is and put the Queen on the other side of the King as in normal Chess.

But yeh, 9x9's are irritating. lol.
When they refer to ''Modern,'' and ''make it Modern,'' casual-like make it a martini -- as if everybody understands it to mean Joyce's recent medley -- the real Modern Chess to a whole region of the world in the 1970s is Gabriel Maura's here. By itself Modern was having had more tournaments than CVPage has conducted for all its 3000 CVs. Tournaments in Caribbean, Mexico, Venezuela til Maura died in 1980s.
Sorry, it seems to be working now.
Symmetrical centre Pawn play gives White the centre. If there was mirror symmetry White could get all the possibly better central rank squares he wanted, but he does not because of rotational symmetry, which gives duplicates of each one, except the centre. Why didn't he make the Bishops able to move one square orthogonally without capturing once in the game? What's this Bishop Castling crap? Also see Mats Winther's comments. The board colours are imbalanced as aren't used in the same way. This is especially true in the original game.
John,

>>White has the advantage of a more quickly promoting centre Pawn but it is balanced somewhat by the reverse symmetry.

White has no advantage other than the first move, just like in Orthodox Chess. Not sure where you get that the reverse symmetry somewhat balances the 'more quickly promoting centre pawn' theory of yours.

>> The imbalance between the colours, both in terms of the board and the armies, makes the game ugly,

What imbalance of armies are you talking about?

>> as does the Bishop Adjustment Rule.

Won't argue this one. There had to be a way (perhaps ugly) to solve the problem of the initial Bishops on the same color squares.
Hi Simon!

I'll try to answer your questions:

>> 1. Are there any websites dedicated to Modern Chess...

No, other than here at Chess Variants, I do not know of any othe websites dedicated to Modern Chess.

>> I mean do people actually play it?

Yes, still in Puerto Rico (where the game was invented in 1968), but not as much anymore. 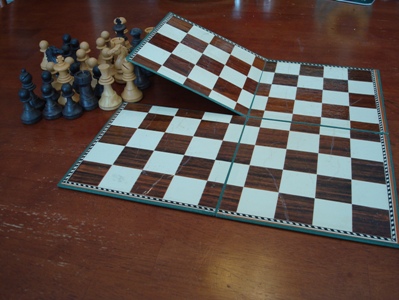 >> 2. It's tempting but I don't like the Bishop adjustment thingy.

It's the only kind of obscure rule, but it was the creator's way of solving the problem of Bishops starting on the same color (which the creator actually didn't see as a problem).

>> Unless perhaps, would giving the Bishop the option to utilise one opportunity per game to move one square in any direction be good?

I guess one can use it as an option or alternative to the original rule. It must agreed before the start of the game to use this variation of the rule.

>> 3. Is it one sided playing an odd number of squares? Does Black or White have a distinct advantage on a 9 x 9 square board?

No. There is no advantage for either player, other than for white having the first move (just like in Orthodox Chess).

International Chess Variants Board (10x10, and you make it smaller) at http://www.modern.chess.variants.tripod.com/

In Europe you should be able to get other 10x10 International (Polish) Checkers (draughts) boards, which you can customize to 9x9, and use your chess pieces from a couple of Orthodox Chess Sets.

I also found last year a copy of the Spanish version of the game inventor's book in a library of rare books in Spain. 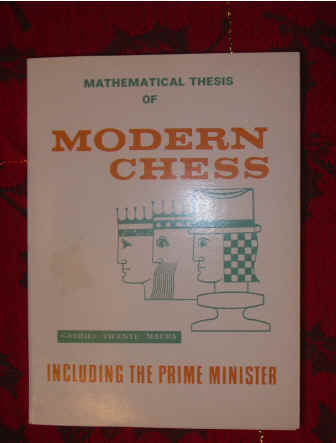 White has the advantage of a more quickly promoting centre Pawn but it is balanced somewhat by the reverse symmetry. The imbalance between the colours, both in terms of the board and the armies, makes the game ugly, as does the Bishop Adjustment Rule. This is one of the reasons I created Modern Makruk. The most obvious solution would be to include a Marshall, but that would just be another Carrera variant, which may be one of the reasons for the creation of this. I, however, consider the Marshall the lesser of the two evils. Shogi does not suffer from either of these flaws because symmetrical centre Pawn play is disadvantageous for the first player and the Bishops are naturally unbound both by promotion and drops.
I was wondering:

1. Are there any websites dedicated to Modern Chess... I mean do people actually play it?

2. It's tempting but I don't like the Bishop adjustment thingy. Unless perhaps, would giving the Bishop the option to utilise one opportunity per game to move one square in any direction be good?

3. Is it one sided playing an odd number of squares? Does Black or White have a distinct advantage on a 9 x 9 square board?

4. Where can I buy a 9 x 9 board?
Here is where all the '9x9's are recently listed at prior comment. So, to add to ones at Coherent are Bifocal, The Travelers, Achernar, Canonical, 9x9 Squares Rotating, Chesquerque, Chancellor, Symmetric Sissa, Nine-Square, Rotary. [Shogi is the only bad 9x9.]
I have developed a more generic Bishop Adjustment Rule for the new Modern Random Chess variation.

My new Bishop Adjustment Rule also applies to Modern Chess:
http://www.chessvariants.org/index/msdisplay.php?itemid=MSthebishopadjus
It is interesting Maura has old tome 'Mathematical Thesis For Modern Chess'. Maura seems to be reacting against 9x9 Chancellor Chess' unbalancing Bishops in keeping them on same colour instead. '9x9' is not that popular size in number of attempts and seems awkward. Yet most games turn out well (better than this Modern) on 9x9. '9x9' must have the highest percentage disproportionately worth 'Excellent' of any particular size-grouping. Who knows why? Maybe because Shogi is so bad from a worldwide perspective, and anything else on 9x9 has to be improvement. Some Excellent CVs on precisely 9x9: Weave & Dungeon, Altair, The Travelers, Coherent, Bifocal, Sissa, Hanga Roa. Good or Very Good CVs on 9x9: Achernar, Kristensen's, Melee, Canonical, 9x9 Squares Rotating, Rotary, Chesquerque, Symmetric Sissa, Three Fat Brothers, Nine-Square. One and all size 9x9 and well worth manufacturing.