Below is a link to a site apparently written by the inventor of Grand Chess (and other variants); in it's coverage of that variant, it mentions that the inventor strove for 'completeness' (by adding the Archbishop and Chancellor piece types that he felt were missing from FIDE chess) - similar to the inventor of Amazon Grand Chess, I kind of feel logical completeness might mean including an amazon piece for each side (possibly the inventor of Grand Chess rejected this simply due to having an odd number of pieces in each army as a result). Note in my 10x10 variant Sac Chess, which has had a lot of testing, having 2 amazons per side (though on a crowded board initially) doesn't seem to hurt the quality of the play in games much at all.

Anyway, for a variant idea I'm still considering, I came up with an alternative setup to that of Amazon Grand Chess (I thought reverse symmetry for the setup can be used, to make the odd number of pieces per side seem less asymmetrical, IMO). On a seperate website from the one below I saw some posters wishing that Grand Chess used normal promotion rules, as in chess (so that the board's edge is made use of for one thing), and also that it allowed a king to leap up to 3 squares once per game, to make up for the absence of castling, so I'm considering these as possible refinements, too. I'll also mention that one thing I don't quite like about the Amazon Grand Chess setup is that the amazon and queen of each side are doubled on a file (albeit behind a pawn) before play even begins... Now, here's the link I mentioned:

[edit: Here's a link to a discussion I alluded to, about how Grand Chess might be improved:]

[edit2: Here's a diagram of a CV idea of mine that might be called Grandiose Chess, which I'll study at leisure (pawns would promote on last rank to any piece type in the setup, except for a king, and an unmoved king that's not in check can leap up to three squares away to an unoccupied square on the first or second rank that's not under attack, regardless of any pieces or enemy attacks that may be in between):][edit3: I'm not liking this so much now - perhaps it's a worse version of Grand Chess, or even of my own Sac Chess:] 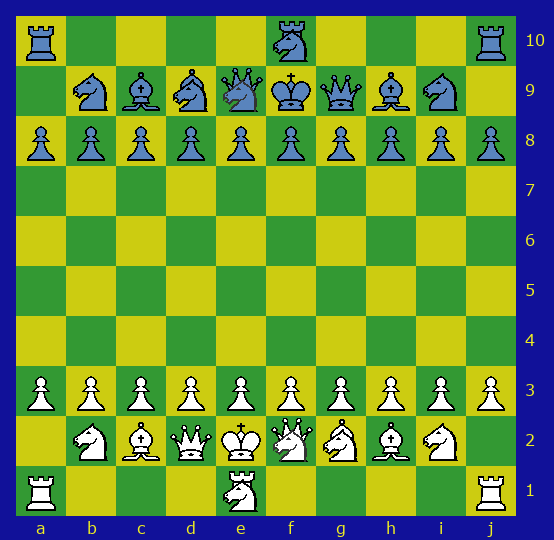