If anyone has questions or wants examples, please feel free to ask. I've been playing this since the 80's and if it's something that hasn't come up I'd be interested in looking at it, and if it has come up I am more than willing to explain how it works.

You mean like this? If you think this illustrates the Knights Capture and Move better than the current one, it can certainly be added, or even replace the other one. 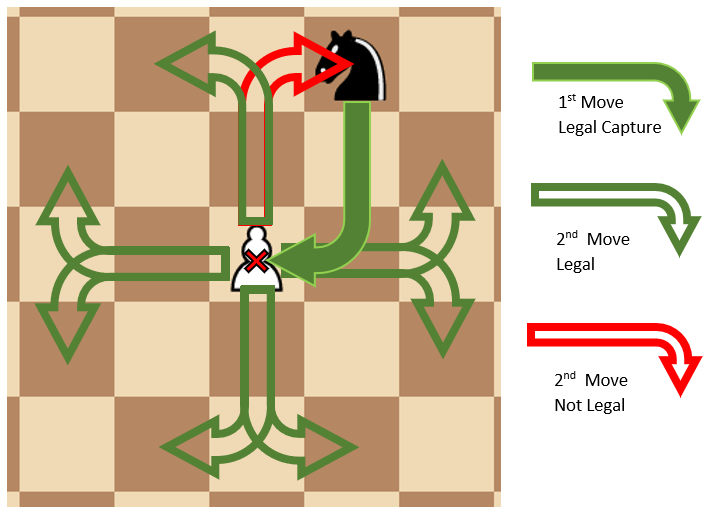 So, how does this work, I believe I have covered everything that has ever come up since it's inception in the 80's. I can add examples if needed, but will it be open for adding graphics after it gets off probation or not?

Well, I believe I've clarified Capturing en passsant. That's always been a sticking point as I've only ever taught it in person and simply mentioned it in the rules before.

I've just never had the right words for it, but I guess the diagrams help. :)

However, I felt it was a bit vague as well and needed clarifying.

Checkmate is only ever achieved on the defending Kings turn, as it is in Chess. The King always gets a chance to get out of Check. The 50 move rule is as much a thing in Hit and Run Chess as it is in regular Chess.

If your piece moves to put the king in Check, and that move reveals a piece lined up to capture the king, It is still just Check. Sovereign defeat can't be taken, it must be accepted. You can't just swoop in and capture a king.

Check Mate, Stale Mate, mutually agreed upon draw, it's all determined on the Defending Kings turn. However, you can try to pad your Check as much as you like with your pieces. A King that can't escape is always a Checkmate, after all, unless they can't move at all and are not in Check, of course. I believe a stale mate is always in favor of the defender in Standard Chess, at least that's how I was taught.

I did say no King can ever be captured without a Check, but I see that was a vague. I guess I've always just felt the Check/Checkmate rule to be Standard Chess rules, but it makes sense that with two moves it should be clearly stated exactly when Check and Checkmate take place.. I'll add the above clarification to the Rules.

I was worried the Queens diagram was a bit busy, but the Queens options are much more complicated , so felt it still helpful. In actual play it doesn't seem so complicated, but I'm also not trying to convey a physical image of good and bad choices. :)

The diagram itself is probably a symptom of me being a programmer...

Thank you very much, I hadn't even thought about the spelling.

Very interesting, I looked through the known Double Move Variants and I really didn't know there were so few. There are elements of each one that I particularly don't like. One even sounded like an opposite of mine regarding returning to the original square after a capture.

Hit and Run Chess was developed with the premise of trying to keep the game as close to chess as possible, while keeping it balanced and not introducing new pieces with special moves.

The first move in any game can be pivotal. No matter what side you play. Starting out with 2 moves seemed to break the game. Equally, forcing only the first player to forfeit their second move seemed unfair. So both players open their games as they would in standard chess, they both move one piece once.

A straight line capture and advance also proved to be game breaking. Way O.P. and resulted in much faster and less interesting games. The concept of Hit and run was basically born, although not realized, by the introduction of the divergent path after capture. It seemed unfair that this affected all pieces except the knight. However, the night had one annoying predilection, that of striking out from behind the safety of the Pawn wall and retreating back to safety after capturing. So to even things out and to challenge both the player and his Knight, the Knight was restricted from doing this, Ostensibly applied under the divergent path rule, as for all pieces, their Starting square was along their path of attack and it seemed bth balancing and fair.

Capturing on the second move was also way over powered, as it could conceivably result in a Check Mate without Check, which is why I suppose, other variants impose the end of turn if a check is made on the first move. However, who wants to lose their second move, really. So to further drive home the idea of Hit and Run Chess, and the thing that truly gave it life, was to limit all captures to only the first move of any piece. Thus also allowing the wonderful feeling of being able to capture two pieces in the same turn when moving two pieces once, while making the second move of any piece that captured on it's first move. a maneuvering move.

As balanced and fair as possible, uncomplicated due to retaining all of the regular rules as far as how the pieces themselves move. Should be easy to remember as there are only a few stipulation.

Move one piece twice, two pieces once, Capture only on the first move of any piece, and taking a divergent path if moving one piece after capturing.

Well, I guess you might not be interested as to why the game has evolved to what it is, but I found it interesting how these other variants approached the same issues.

Thank you, I don't know if this will be an issue, but I added one more image to illustrate an OVER examination of the Queens options with a Hit and Run move. As you can imagine Queens have many more options.

I hope it does not cause issues. If it is, I can re-upload it later. if images can be added to the Variants after they have been released, or will that be a final form?

I'm not sure I understand what you mean by "... the knight diagram would be better if the second move in the same direction was on-board." Knights don't, technically, have a direction, they jump. The only real restriction for the Knight is that it can't return to it's original square after capturing.

I didn't want to clutter the image up with a bunch of L shaped arrows. (Unlike the Queens examination, which is a bit busy, but hopefully understandable, with Captures referenced by the red X along with the Restricted Movement After Capture Arrows, rather than the long green arrow, which was ok on the diagrams with fewer options, but was just too much for the Queens Diagram.)

Again, I really appreciate your help.

Sounds reasonable. As this is my first entry here, I simply put it in as I have it in the handout/rules pdf I created for ShadowCon.

I am more than willing to listen to the advice of those with experience on how best to utilize this site.

If anyone can inform me of how to fix this, from the Link Description I think; "After the first move players may move 1 pies twice or two pieces once,"...

I would be most appreciative.

Technically, the restrictions only apply after a capture and only if you choose to move the same piece for the second move. Sort of a checks and balances type of thing.

Knights are kind of special to begin with. They don't really have "lines" or "paths", rather they have landing sites. Without a capture the Knight may go anywhere it can legally reach on it's second move that is not blocked by friendly or unfriendly pieces. So (assuming all potential landing squares are clear) a knight has all 8 squares free to move to after it's first move, and if it captures on it's first move then it has 7 places it can go since it can't return to the square it attacked from.

The restrictions on movement after capturing helps to balance the game and imparts an element of danger when you can't just strike out from a safe position and then simply return to safety every time. The reason for limiting the attack to the first move also helps maintain balance. If you are allowed to capture on the second move a checkmate condition is more likely too early in the game and really doesn't make the game any more fun.

However, if you are simply going to move one piece twice for the sake of positioning, then the board is your playground. If you want to sandbag your two moves by moving and returning to your original place, so be it, you just can't do that after a capture.

The ability to make two captures in one move is still there, so long as you use your two moves with two pieces moving once each.

Keep in mind that you can't really cover another piece very reliably, as you can in standard chess, because someone can swoop in and capture it, then run away.

As for the names, it was originally dubbed RuneChess, but that was simply because I ran a BBS by the name of RuneStone. Hit and Run Chess is the name that best describes the game. Calling it Pirate Chess sort of just happened and is a bit more enigmatic and fun. I run gaming for a local con called ShadowCon and there was a local Cosplay Pirate group, so one year I put it out as Pirate Chess and it sort of stuck.

Does it make more sense now?

Please let me know if this is not ready for submission.