It seems that the script change affected the editor that is used in presets to write a brief description of the rules since these now appear in html view.

You are welcome, Kevin.

The formatting issues seem to have been fixed. It only remains to mention that the available presets are three.

Set. Problem solved. Thank you very much for your help, Fergus. Yes, but then how to explain that the program allows moving the piece like Ferz? With the following code I have made some progress because the piece already can make the desired legal moves:


However something must be wrong since the program allows the Osprey to be moved as ferz. What do you think is the cause?

Thanks. I think we are close to finding the solution!

Then the question is how do we get the where operator returns the 4 options:

Is there any other digit to use instead of 0 that fulfills the desired purpose? I mean the zero that I previously underlined.

What is easy to deduce is that the first backward line of code should look like this:

Is my assumption about the Osprey-Range definition correct?

How should the underlined parts be read (interpreted)?

Particularly, what do the underlined  0 's mean?

Trying to edit a preset for this interesting variant by using the fairychess include file I'm almost done, just need to define the function of the Osprey which is a color-bound aanca, first jumping as dabbabah and then sliding outward as bishop. The following diagram shows its move: 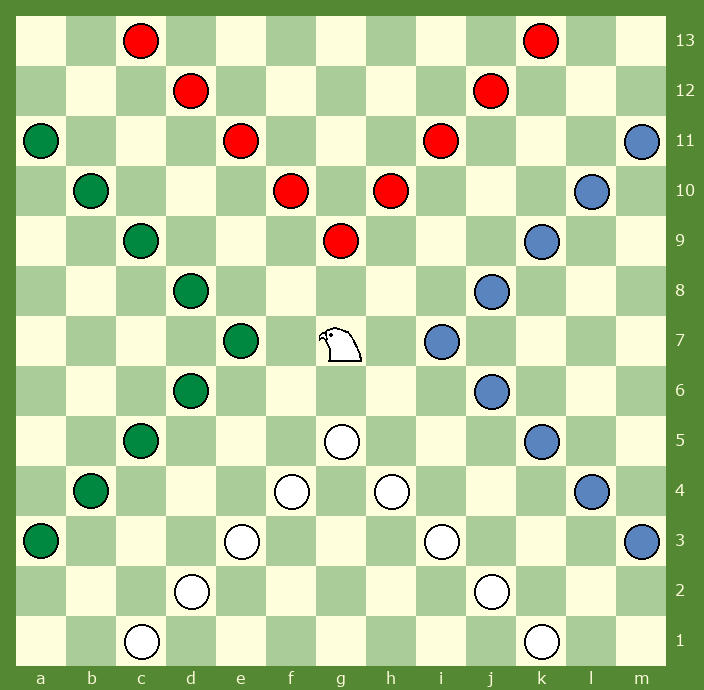 I guess the code for Osprey-Range would look like this:

Could you please tell me the code for such a function? No hurry; when you can spend some time it's fine. Thanks in advance.

The key at the bottom that describes the pieces shows Alfaerie images.

So is. I already corrected it. I even put links to the three presets separately so that the player who is going to launch an invitation can choose the one he/she likes.

Thank you very much!

The new preset page is already updated. Please let me know if you want us to write any particular text there. You don't have to worry about past game logs being affected because I have used another settings name.

I have never seen the word 'compound' used in sequential meaning; I would say the Sissa is an (isosceles) hook mover. And I would not say the Tai Shogi Hook Mover is a (conjunctive) compound of two Rooks. The word 'or' usually implies 'and', and if you consider this operations on the move sets, the 'conjunctive compound' of R and B would have no moves (as B and R have no moves in common), and the conjunctive compound of K and R would be the Wazir, etc. There doesn't seem a case where this cumbersome way of describing more elementary move sets is useful, as they tend to all have simple names of their own. Note that the Sissa can neither move as a Rook, nor as a Bishop.

It seems to me the addition of 'disjunctive' serves no other purpose here then sow confusion in a case that otherwise would be correctly understood with 100% certainty.

Thank you very much, HG, for the clarification. Soon I will make the correction in what corresponds to the Sac Chess preset. It will take more time to do it in other texts because they are many.

What is paradoxical and anecdotal about this case is that I believed that making that distinction introduced clarity!

In passing, it should be borne in mind that 90% of what I write in English is "formatted"  [written, thought, said] by the Google translator.

Thanks Greg. I would suggest that players could choose customize the piece set between abstract and alfaerie.

The one who edited the preset in use was me with some guidance from Fergus.

Sissa is a compound of rook and bishop but its move is not disjunctive, it is conjunctive.

Conjunctive = A and B

Disjunctive = A or B

I would like to know if there is any way to access the set of pieces that ChessV uses for Sac Chess, that is, to which group does it belong and the name of the particular set?

I am looking to change in the current preset of Sac Chess the image of the zebra for the most appropriate of the knight/guard.

Analysis of the final position of the Cetran Chess 3 game played by Carlos Cetina (White) vs Daniel Zacharias (Black) made to answer a question raised by Thor Slavensky. 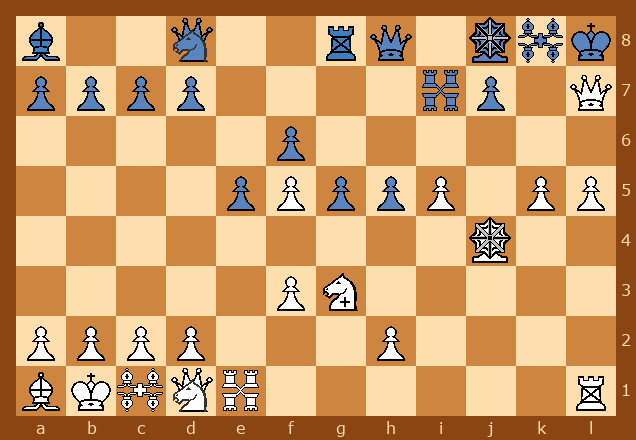 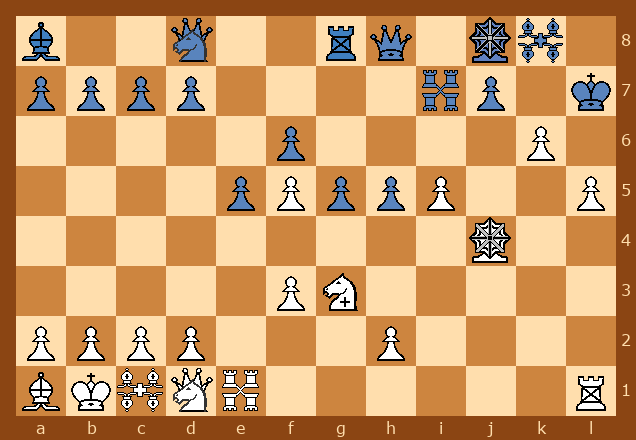 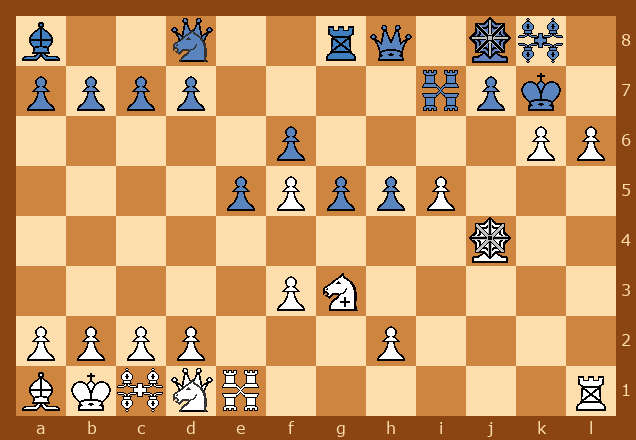 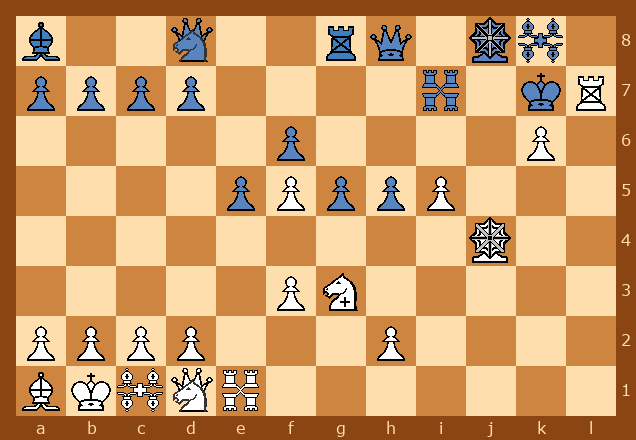 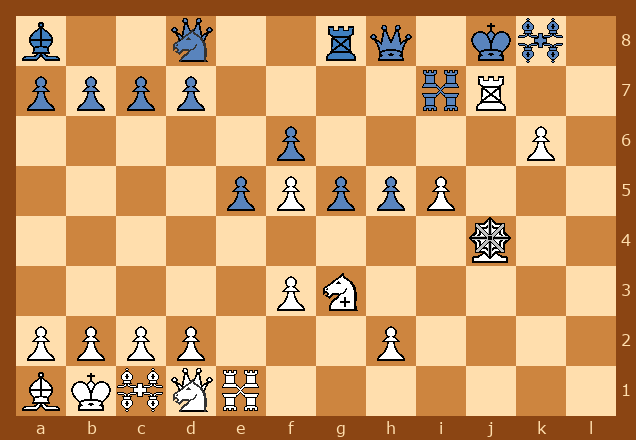 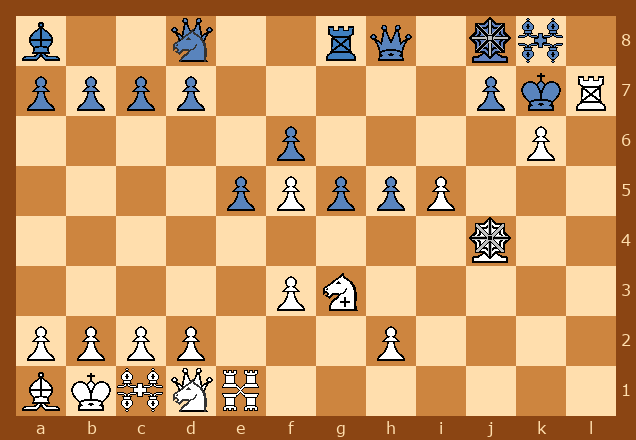 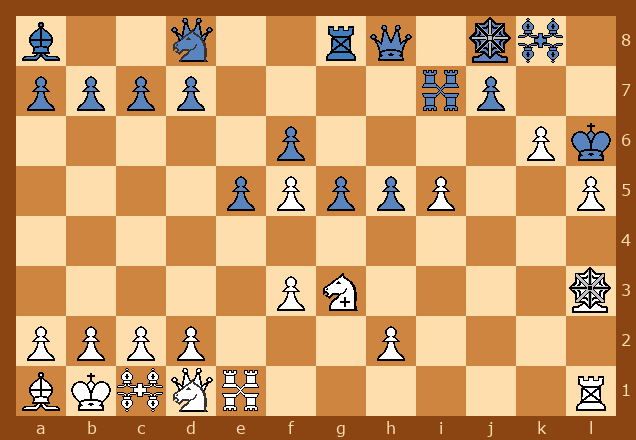 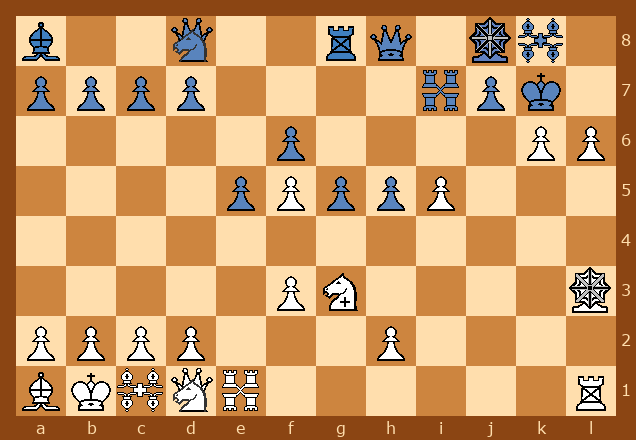 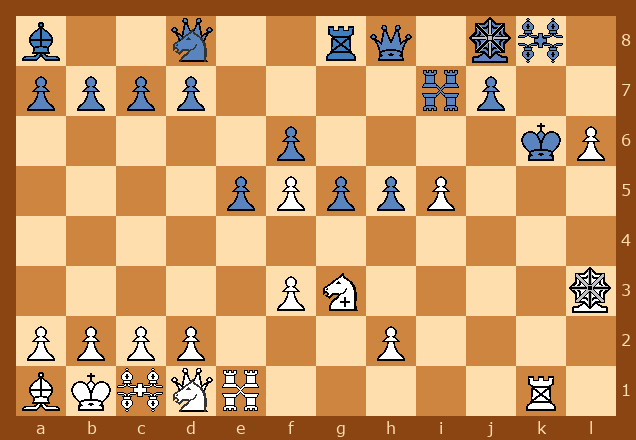 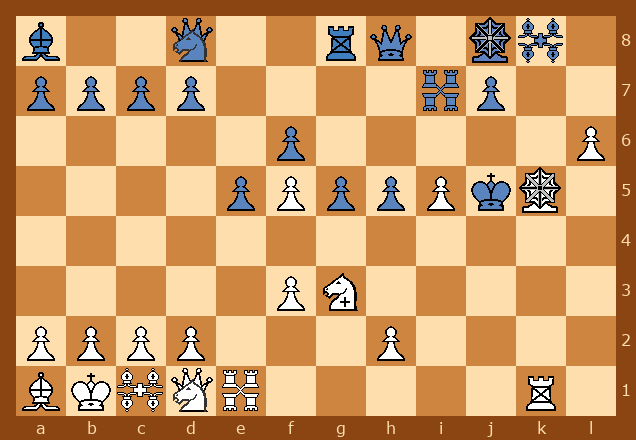 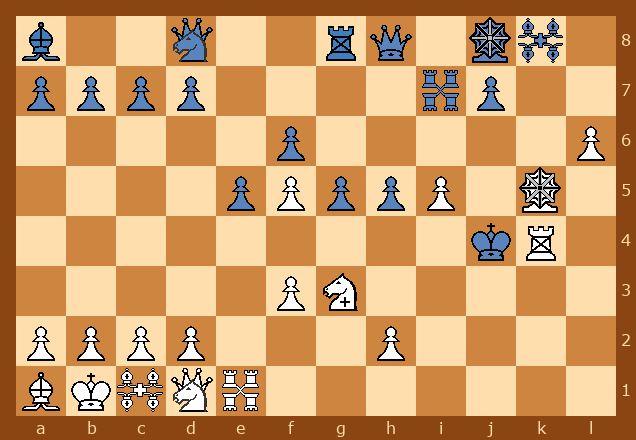 Sissa and Dragon King defend each other. 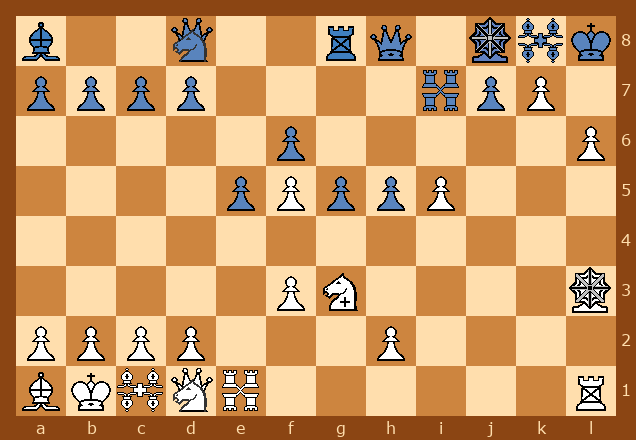 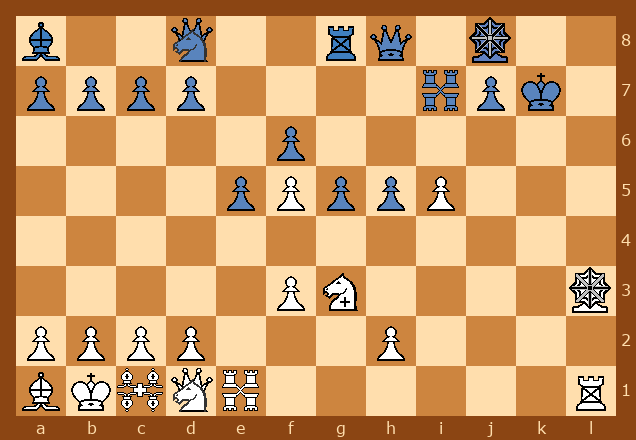 At this point it is not clear whether or not White has any decisive advantage. To continue attacking it needs to move its Gryphon to g2 so that the Amazon can join the fight and the Aanca from c1 can also do it later. Maybe Black could rearrange his defense starting with Gryphon k6. 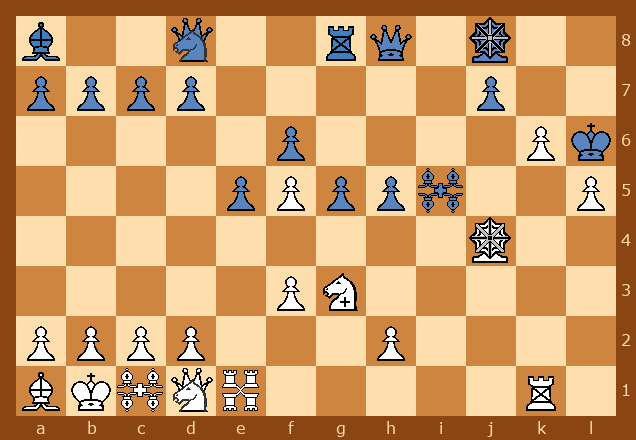 Again, it is not clear that White has any decisive advantage. However I think White has enough compensation for the Queen. The fight continues and "the coin is in the air".

At our current game I cannot make 7... b h5-f3 (bishop x wizard) because the GC program says: "A King may not use the special moves out of check. Use your browser's BACK button to go back to the previous page, then reload if necessary."

In order not to affect the current games, it would be convenient to do the tests to improve the code in a cloned preset using another settings name.

I have already downloaded the new version. Thanks again for your excellent work. I think the released date mentioned on your website has the wrong year.

Watch ChessV acting in all its glory!

Thanks, Greg, for answering. Hopefully soon some mobile apps developer could join and help in your ChessV undertaking.

I'm sorry to tell you that I have found these bugs:

1. In Ministers Chess setup the i-rook and the h-knight from White side are switched.

3. When rotating the boards the numerical coordinates remain unchanged.

4. In Gross Chess the window size does not fit proportionally to the PC screen.

Aside of that, I'm enjoying immensely your masterpiece!

You are welcome, Greg. Let's follow playtesting your masterpiece! Have you thought about developing a ChessV app for mobile devices, tablets and phones?

Those who are participating in the current tournament and are playing Symmetric Chess for the first time maybe might be interested in seeing how ChessV manages the matter.

Okay, following your instructions, I was finally able to run the program. It's wonderful! 106 chess variants available!

Congratulations Greg. You have done an excellent job.

Thanks again for all your support!

I must tell you that I am now using a new recently purchased HP laptop, whose main specifications are:

When I double click on ChessV.exe, a window pops up saying "Fatal Error. Directory of piece set graphics could not be found. Please re-install ChessV."

After re-downloading http://chessv.org/downloads/ChessV2.2RC2.zip and following the whole process to run it, I get the same outcome.

I have just updated this page by adding a link to the preset programmed by Greg Strong. So, from now on I start using it.

Bad news. I followed your instructions completely but cannot run the app. Now the emerged window had a black background, no text and there was only a blinking cursor; the window header said:

Out of curiosity, I tried to do the same thing I did with Nebiyu, that is, to run it with WinBoard but the action was stopped.

It seems that I have no choice but to wait for the new ChessV version.

Thank you very much for all!

I reloaded ChessV2.2 again and, trying to run it, a window was opened saying:

System.NotSupportedException: An attempt was made to load an assembly from a network location, so the assembly would have been included in an isolated space from previous versions of .NET Framework. This version of .NET Framework does not enable the CAS directive by default, so this load can be dangerous. If this load is not going to include the assembly in an isolated space, enable the loadFromRemoteSources modifier. See http://go.microsoft.com/fwlink/?LinkId=155569 for more information.

The program stopped working correctly due to a problem. Windows will close the program and notify you if a solution exists.

Then I loaded your program one more time by using another PC (also with Windows 10) and the result was the same error message.

So there is no doubt that whoever has the problem is me. And to think that I was so excited because  I was going to try Symmetric Chess vs an engine!