DISCLAIMER: The ideas expressed on this page are the creative work of its author, Charles Gilman, and they might not be shared by others responsible for this website. They do not represent any convention, consensus, or standard regarding piece names.

My article MAB 01: Constitutional Characters lists the simplest radial pieces. Some mix long- and short-range moves, but all are entirely symmetric or entirely forward-only (FO). This article completes coverage of pieces in Shogi, whose generals combine symmetric moves in one kind of radial with FO moves in another. For meanings of component names, see the aforementioned article. As translations of their Japanese names are extendable to other directions and have no misleading connotations, I stick with them and add other generals. Where one or both components are extended I replace general with something suitably obvious.

The acknowledgments, overview, and glossary to the series can be found here. Established pieces have a link to their Piececlopedia page. The images used in this series, and indeed in most of my pages, can be found here.

The GOLDGENERAL (Kinsho) combines the moves of Wazir and Cross, and the SILVERGENERAL (Ginsho) those of Ferz and Point. The first is stronger than the second not merely by having more moves ("5 for Silver, 6 for Gold", as the rhyme goes), but because its moves are better distributed between orthogonal and diagonal and allow triangulation, whereas the Silvergeneral is rankswitching - always moving from an odd to an even rank or vice versa. In the corner orientation the numbers are reversed but both can triangulate. Both are unbound - can reach an orthogonally adjoining cell - in all geometries, as are all this page's pieces in geometries other than the hex-prism ones pioneered in Honeycomb Chess. Both have established images, and here are their movement diagrams:

For long-range versions I remove general, strip the start to 5 letters if more (c.f. Girafrider in the previous article), and add -rider to give GOLDRIDER=Rook+Mitre and SILVERIDER=Bishop+Wing. Alternatively just the symmetric component can be extended, giving GOLDROOK=Rook+Cross and SILVERBISHOP=Bishop+Point (the latter called Flying Falcon in Wa Shogi), or just the FO component, giving GOLDMITRE=Mitre+Wazir and SILVERWING=Wing+Ferz. This is why I used distinctive names for FO pieces in the first article: it would not do for a piece substantially weaker than a Silverbishop to have to be called Goldbishop, so Mitre and Goldmitre get round that. Motorcyclists may be disappointed that the name Goldwing is not used! Here are the movement diagrams for the six pieces: 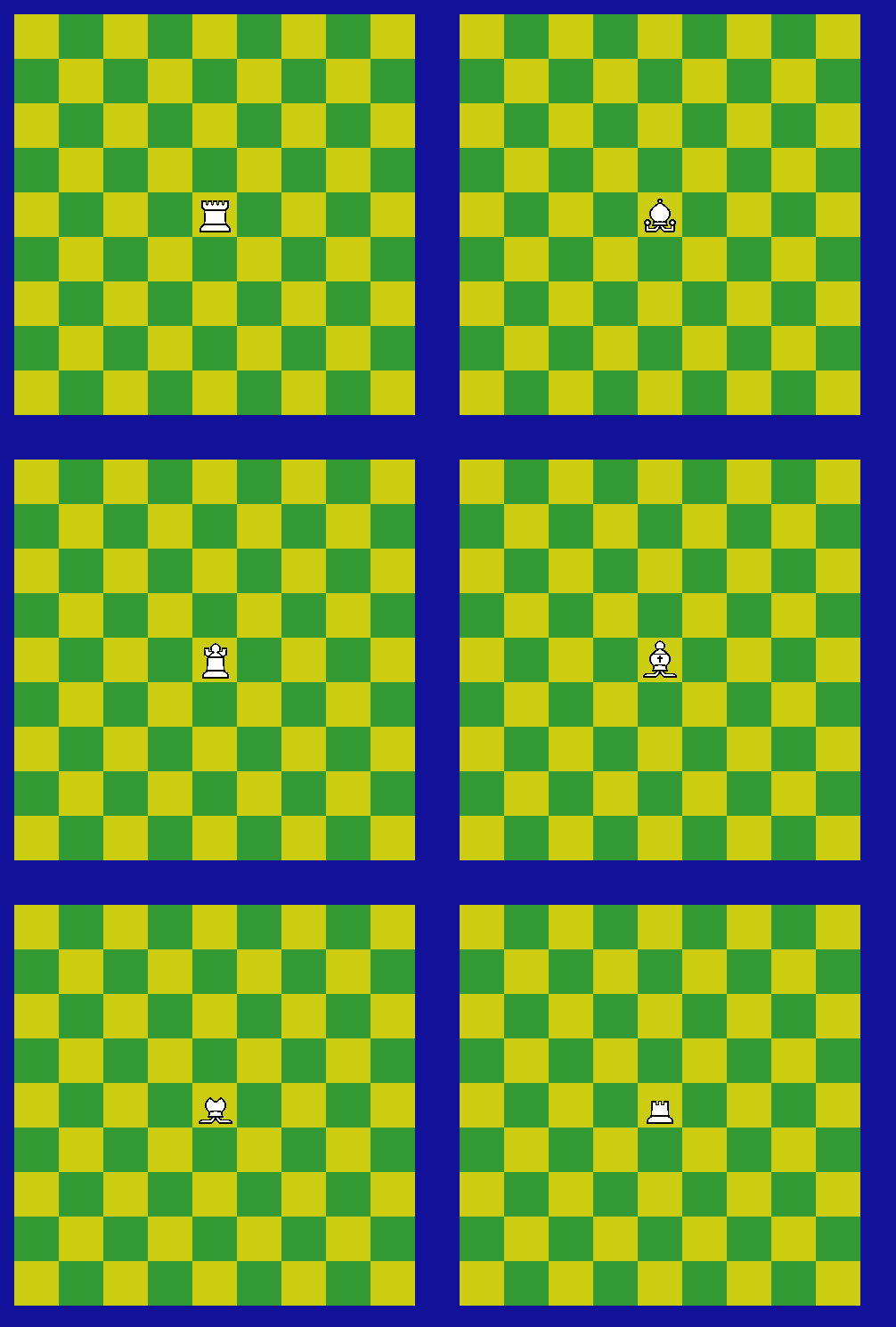 On a cubic board the Silvergeneral has more moves than the Goldgeneral (in both orientations) and both can triangulate (as the Ferz itself can). Even though Goldgeneral moves are still better distributed, traditional Shogi promotion makes less sense on such a board. It also adds a third kind of radial direction, a nonstandard diagonal (commonly called triagonal). Wazir+Saltire could be considered not-quite-Gold, so looking to a less-precious yellow metallic substance I name it BRASSGENERAL. The same principle applied to Ferz+Saltire gives STEELGENERAL. Conversely the nonstandard diagonal can be the symmetric component. Viceroy+Point=AZUREGENERAL, Azure being the background blue behind the Saltire on the Scottish flag. Viceroy+Cross=JADEGENERAL (see notes), green Jade combining the blue Azure sharing the symmetric component and the yellow Gold sharing the FO one. Of the 4 only the strong-sounding Steelgeneral can triangulate, as Brass and Azure are colourswitching (like the Duke of whose move theirs are subsets) and Jade rankswitching. In terms of move lengths, the generals on a hex 2d board are Brass and Azure, rather than Gold and Silver, and both can triangulate using just their symmetric component. The Glinski/McCooey orientation has 8 Brass and 7 Azure directions, the Wellisch orientation vice versa, and here are their movement diagrams in that order: 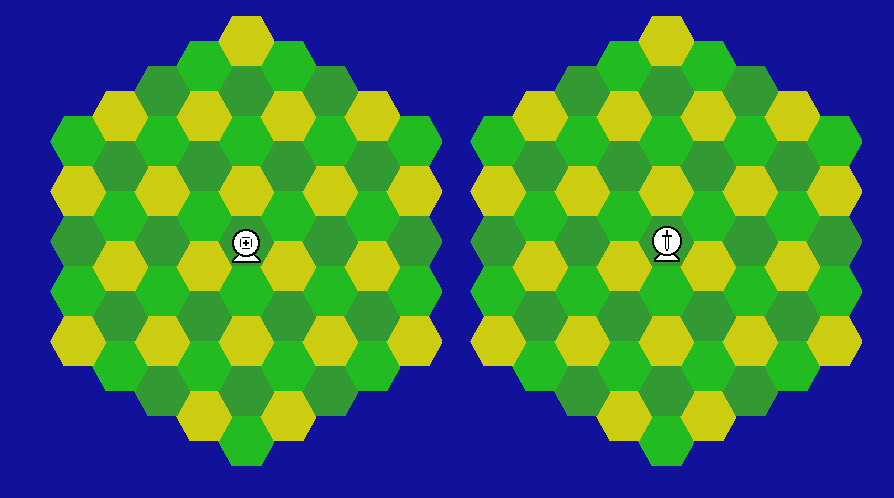 All can have riders. The pieces with only the symmetric move extended are BRASSROOK, STEELBISHOP, AZUREUNICORN, and JADEUNICORN and those with only the FO move extended BRASSHORN, STEELHORN, AZUREWING, and JADEMITRE. Jim Aikin can be relieved that I have not encroached on Five Up nomenclature with a Silverunicorn!

Now it gets complicated. On a cubic board you can also mix all three types of direction, giving generals to which it does make sense to promote those above - as my variants Tunnelshogi and 3d Minishogi do. To name these I look to the great divisions of the world and sky. Wazir+Heir keeps the yellow of Gold and Brass to be a SUNGENERAL. Ferz+Count similarly draws on Silver and Steel to be a MOONGENERAL. Viceroy+Princeling alludes to the meeting place of the blue of the sea and the green of vegetation covering fertile land, to be a COASTGENERAL. Prince+Saltire, having all Sun and Moon directions, is a SKYGENERAL. Duke+Cross and Baron+Point go either side of the Coast to be FORESTGENERAL (grown by the Sun) and SEAGENERAL (given tides by the Moon). The Coastgeneral is rankswitching, but the other five can triangulate. All twelve generals appear in their rectilinear form in my 3d variant Ladies and Generals. Here is a diagram of how they relate. The inner ring comprises the two-kinds-of-radial generals, each adjoining that sharing each of its components and opposite the one with the symmetric and FO components swapped over, e.g. Gold opposite Silver. The outer ring comprises the three-kinds generals, each adjoining the two of which it can be considered compounds. The images of the latter have been chosen to refect the pieces' names rather than their moves. 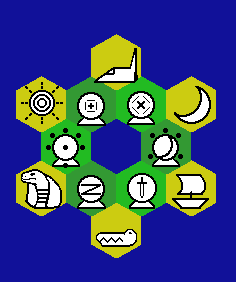 All the pieces covered here so far are capturable, even though General on its own is the name of a piece that must be kept out of Check. What if part-symmetric steppers have that piece's (and the FIDE King's ) royal restriction - compounds of the General rather than the Wazir with FO diagonal pieces? There is a case for giving these distinct names. As they have subsets of MAB 01's King, Grandduke, and/or Emperor moves - all rulers of one kind or another - I suggest GOLDRULER, BRASSRULER, SUNRULER, SKYRULER, and FORESTRULER.

One approach is to expand either the noncapturing or capturing move of the Pawn, Yeoman, Pawnrider, and Yeomarider to be symmetric. This can be seen as restricting the other move of the Steward, Contrasteward, Stewardess, and Contrastewardess to be FO. It is the former that my suggested nomenclature reflects, by giving the FO piece's name the prefix from the piece with all the moves both capturing and noncapturing. Pieces include the GOLDPAWN and GOLDYEOMAN, a Wazir capturing as (and only as) a Cross and vice versa; SILVERPAWN and SILVERYEOMAN, a Point capturing as a Ferz and vice versa; GOLDPAWNRIDER and GOLDYEOMARIDER, a Rook capturing as a Mitre and vice versa; and SILVERPAWNRIDER and SILVERYEOMARIDER, a Wing capturing as a Bishop and vice versa. Note that Goldpawn+Goldyeoman=Goldgeneral et cetera. There is a particular reason why I decided on names based on FO divergent pieces rather than those with backward and/or sideways moves. It is because prefixing the latter better suits pieces intermediate between them and the unrestricted symmetric compound pieces. Steward+Yeoman=GOLDSTEWARD and Contrasteward+Pawn=SILVERSTEWARD are divergent in their sideways and backward moves, but have tbe full forward move of the Princeling. Likewise Stewardess+Yeomarider=GOLDSTEWARDESS and Contrastewardess+Pawnrider=SILVERSTEWARDESS regarding the Princess. Here are the movement diagrams for the Goldpawn, Goldyeoman, Silverpawn, Silveryeoman, Goldsteward, and Silversteward: 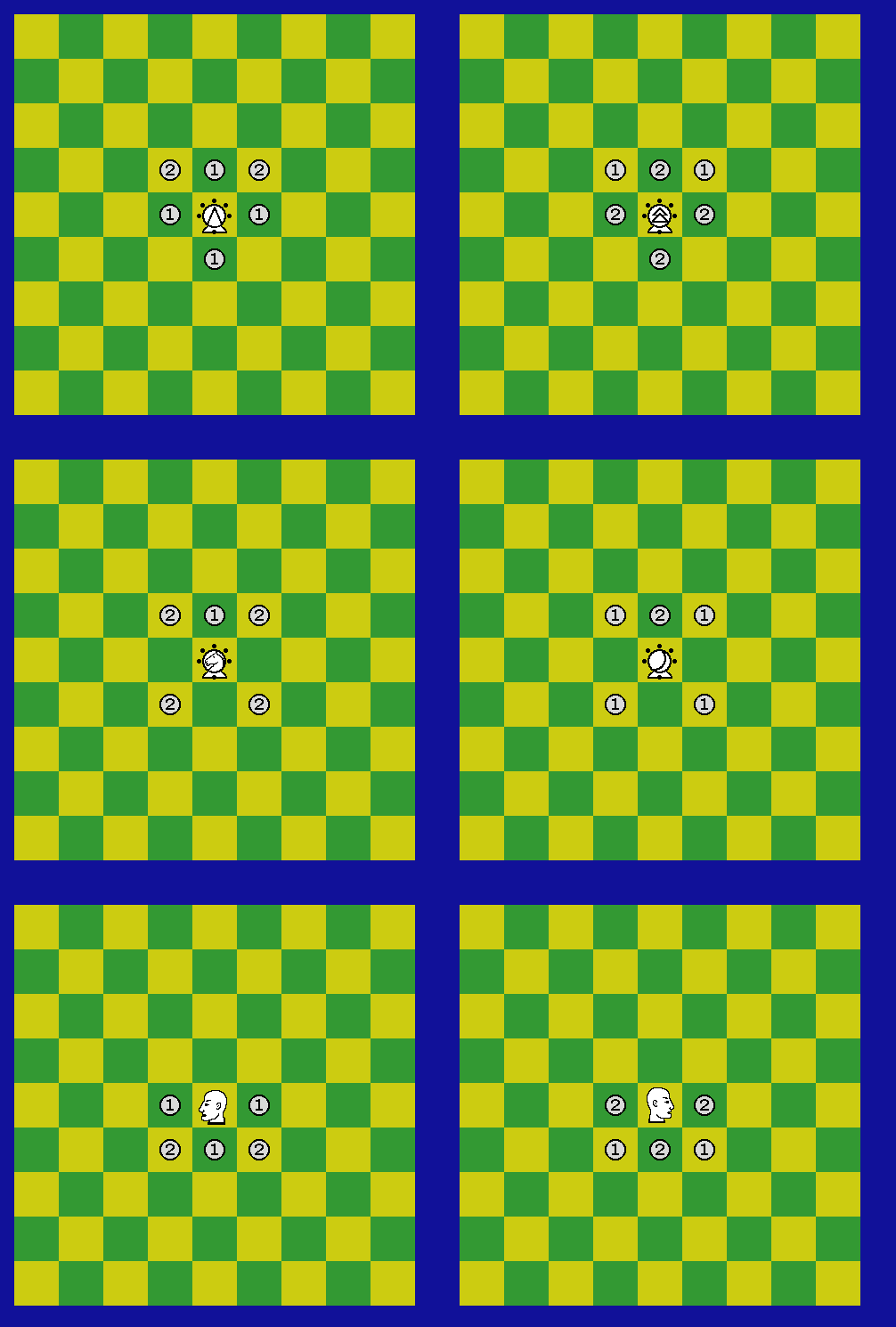 Applying Jose Carrillo's Ajax principle an AJAX POINT/CROSS/PRINCELING/GOLD/SILVER are Princes, the AJAXRIDER WING/MITRE/PRINCESS/GOLDRIDER/SILVERIDER Queens, and the AJAX GOLDROOK/SILVERBISHOP a Chatelaine and Primate, capturing only as the non-Ajax named piece. Hex analogues are the TEUCER POINT/SALTIRE/COUNT/BRASS/AZURE for the Duke, TEUCERIDER WING/HORN/COUNTESS/BRASSRIDER/AZURERIDER for the Duchess, and TEUCER BRASSROOK/AZUREUNICORN for the Vicereine and Besieger. All are available on cubic boards as are the TRAMBELUS CROSS/SALTIRE/HEIR/STEEL/JADE for the Baron, the impressive range of the TELAMON POINT/CROSS/SALTIRE/PRINCELING/GOLD/SILVER/COUNTESS/BRASSRIDER/AZURERIDER/HEIR/STEEL/JADE/CONQUEROR/SUN/MOON/SKY/COAST/FOREST/SEA for the Archduke, and their riders and partial riders.

The xyrixa geometry, as featured in Mark Thompson's Tetrahedral Chess, preserves relations between the Shogi pair most consistently of all the 3d ones. It has 14 Gold and 7 Silver directions when face-to-face square-level, 13 Gold and 10 Silver when corner square-level which is also square-ranked, and 15 Gold and 9 Silver when hex-ranked.

If hex boards are ranks, hex diagonals are purely within-rank. This eliminates Brass, Steel, Sun, Moon, and Sky pieces and the Azurewait-er/-ress and Jade-butler/-valet. Other Azure, Jade, and Coast pieces have sideways moves - with which they can triangulate - but not backward ones. This means that they progress like Xiang Qi promotees and furthewr promotion, while useful, is not strictly necessary. The remaining five are unbound. This orientation also retains the square-board strength difference as "13 for Silver, 14 for Gold", and allows any general to triangulate, except the Silver which retains its 2d rankswitching character.

On Pentagonal boards directions vary with position. Exact numbers can be calculated by adding the directions of the symmetric and FO components as listed in MAB 01. The only long- or mixed-range pieces available are prefixed Rooks, which again are long-range only up and down. Likewise on hex boards certain cells reduce AVERSE AZUREGENERALS and AZUREUNICORNS temporarily to Saltires and Unicorns.

Coprime pieces in another kind of radial direction, occurring only on hex-prism boards, have their own article, MAB 10: The Hybrid Diagonal. This is in order to keep this page simple for readers less interested in hex-prism geometry.

Non-coprime part-symmetric pieces have their own article, MAB 11: Long-Nosed Generals, and pieces with more complex combinations of directions, such as the Hunter and offshoots as used in Nimrod and the Coppergeneral of certain Shogi variants theirs, MAB 12: Alternative Fronts.

I avoid names used for existing Shogi-variant generals not conforming to this type such as Irongeneral, identical to the Princeling of MAB 01, and the previous paragraph's Coppergeneral. I also avoid any prefix translating into Japanese as Bi, as a name translating into Japanese as Bisho would confuse matters. Where sources translate one name for the King as "Jade general" this is poetic licence. The first part of the Japanese name simply means jewelled, without specifying any particular kind of jewel.