A Mystery Quest: a Magic-carpet Ride is a short book by Shaye-Alexander Ellis Nicholls of Merridonia

©-® = Copyright of Merridonia with all Rights Reserved.

The moral right to the work herein is asserted by the author Shaye-Alexander Ellis Nicholls (SAE Nicholls) of Merridonia.

Merridonian Copyright with Reserved Rights or Trademarks or Emblems or suchlike are without limit.

Only those of Merridonia are eligible for the aforesaid Copyright or Reserved Rights or Trademarks or Emblems or suchlike.

Merridonian Copyright or Reserved Rights or Trademarks or Emblems or suchlike require acceptance by the author.

Merridonia is a private world by invitation of the author only.

The work herein is subject to change at any time and in any way as the author sees fit.

From A Chess Set

‘Western chess is often called International chess and this reflects the status this game has been accorded.....and Western chess is sometimes called the Royal Game and indeed many such as Kings and Queens have played and been enthusiasts of this game and its precursors for centuries, and still are.’

From The Oxford Companion to Chess by David Hooper & Kenneth Whyld, 1984/87

‘No game has surpassed Chess to the extent that it has commanded a following in all countries of the known world for many centuries.’

A Secret Sealed – But What Revealed

with Patterns in the Force

Not so Bonnie over the Ocean

Back to Slovenia I

Back to Slovenia II

At the moment this is very much ‘bits and pieces’ in process of being put together and some – indeed all, may not be included.

Extract from: www.arabamerica.com/Arab Contributions To The Game Of Chess

‘The Arabs were also responsible for dividing the game into the three parts we know today: opening, middle and end games. According to C. Alexander in his A Book of Chess, the Arabs not only invented the World Chess Championship but also the Grandmasters. He states that in 820 A.D. there were four ‘aliyat’ or ‘players of the highest class’, and in 847 the Persian ar-Razi defeated al-‘Adli in the presence of the Caliph Al-Mutawakkil – an international contest that seems to carry a hint of the classic Fisher/Spassky clashes.’*

*The 1974 book Alexander on Chess (a fine Western chess primer) by C. H. O’D Alexander indeed states: ‘In 847 there was what sounded like the equivalent to the Boris Spassky v Bobby Fischer world championship match – a great master, the Persian ar-Razi, appeared and in the presence of the Caliph Al-Mutawakkil, defeated the champion al-‘Adli’…..and Bobby Fischer defeated the champion Boris Spassky in Reykjavík in a match that many say is the most famous Chess match ever played (it made headline news all over the world for weeks) after losing the first game following an apparent beginner’s mistake – a move sometimes called the biggest blunder ever made in Chess…..or was it, I’m not so sure – there is footage of him actually making this move and other footage on the match in the 2011 DVD Bobby Fischer against the World - the move was 29… Bxh2 and Boris replied 30. g3 trapping the Bishop, but Bobby at first seems to think he can save it with 30... h5 (30… Ke7! threating the b5 pawn – a tiny initiative that may have given Bobby practical chances to hold the game, if not so in theory.....or does it hold regardless, see A Simulation), and I wonder if he simply overlooked 31. Ke2 (a backwards move of the King, though 31. Ke4 followed by Kf3 – another backwards move of the King, may have been as good), then again see Return to Reykjavík…..anyway, there is much information available about this match that took place in 1972 - over a thousand years after the al-‘Adli v ar-Razi match.

But unfortunately there is, of course, nothing like as much information about the match as the Boris Spassky v Bobby Fischer clash…..

…..there are a number of references in books and online to this match but the one as quoted from Alexander on Chess with: ‘…..what sounded like the equivalent to the Boris Spassky v Bobby Fischer world championship match…..’ is the only one I have seen that gives this sort of perspective on the scale of the match, and the words what sounded like suggest a more first-hand reading or telling of the match…..but from what source.....

…..first though let us take a look at the wider settings of things….. 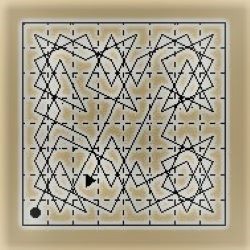 A Horseman’s Journey by al’Adli

‘But chess in AD 847 was altogether different from chess today.’

A Secret Sealed – But What Revealed

Over a thousand years ago the Aliya as-Suli wrote of a chess problem that even then was already old:

‘There is no one in the world who would be able to solve it, except those I have taught to do so.’

…..the position is called as-Suli’s Diamond and a solution was not found and published for over a thousand years…..

…..but what was its fantastic secret that took so long to discover – or does it have no such thing at all*…..

*There is a curious parallel to as-Suli’s Diamond in the field of mathematics known as Fermat’s Last Theorem (named after Pierre de Fermat and the last of his theorems to be proved, as it transpired) - the story is interestingly told in Simon Singh’s 1997 book of this name…..very briefly the story is that: Most students have heard of Pythagoras’s theorem that states ‘In a right-angled triangle the square on the hypotenuse is equal to the sum of the squares on the other two sides.’ and most students are familiar with the right-angled 3, 4, 5 triangle where 3^2 + 4^2  = 5^2  i.e. 9 +16 = 25, and there are an endless number of these where the numbers are whole numbers and most students of basic mathematics would understand the expression of this if shown as x^2 + y^2 = z^2 where x, y and z are whole numbers, however, in 1637 Pierre de Fermat discovered that such an expression does not hold true for powers greater than squares i.e. x^n + y^n = z^n  has no solutions where n is a whole number greater than 2, but it was not until many years later that this became known when his son, Clement-Samuel, went through his father’s notes to ensure they would not be lost and amongst them he found the following note in a margin of one of his books:

And so this theorem came to the attention of mathematicians, but if Pierre de Fermat wrote down his demonstration it is yet to be discovered and proof of this basic theorem was attempted by numerous outstanding mathematicians for over three centuries before proof was forthcoming and (according to Wikipedia) before this Fermat’s Last Theorem was in the Guinness Book of World Records as ‘the most difficult mathematical problem’ – or was it, I am not a mathematician but I would ask the question whether solving the value of the square root of minus 1 is not more difficult or the exact value of π…..then again is the square root of plus 1 really known – most would simply say 1, but minus 1 is also an answer, and so 1 (or plus 1 if you prefer) is an answer but not the answer…..these things are so basic to mathematics that perhaps it’s worth a closer look, but to return to Fermat’s Last Theorem…..in 1993 the mathematician Andrew Wiles presented proof of the theorem; it had been very difficult and had taken a great deal of hard work over a number of years, and it was also many pages long and did not seem to fit Pierre de Fermat’s description of his own proof - then an error was found in the new proof – but this was corrected by the following year and no problem seems to have been reported with it since, nevertheless it is perhaps of concern to those who put faith in mathematics and its seeming precision and exactness…..but as with sciences generally, for all its usefulness mathematics is not yet a collection of truths – who knows if they ever will be, and this takes us back to the very basic problems mentioned above…..

Patterns in the Force

….the Northern Shah must stay within striking distance of the Southern General…..

…..if the Southern Shah can hold the Diamond his win is assured…..

as-Suli’s Diamond on a 5x5 board 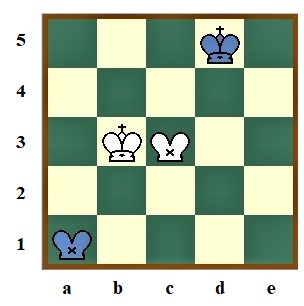 South (White) to move and win

(If North moves his General to b2 he is immediately captured by the Southern Shah without reply, whilst moving his Shah to e4 or e5 leaves him too far away from the Southern General to recapture – these are his only other moves)

(Whatever North plays makes no difference )

4. Shah captures a1 and Wins

‘Towards the end of the fifteenth century, however, a change took place that revolutionized the game: the modern moves of the Queen and Bishop were introduced.’

Not so Bonnie over the Ocean

From a Traditional Scottish folk song:

‘Bring back my Bonnie to me’

Extracts from Grandmasters of Chess:

‘In 1914, Nicholas II, Czar of all the Russians, was host to a great chess tournament instigated by the St Petersburg Chess Society*…..The world’s most important players took part…..At the banquet concluding the match, the Czar named the first five players the Grandmasters of Chess: Emanuel Lasker, Jose Raul Capablanca, Alexander Alekhine, Siegbert Tarrasch, and Frank Marshall.’

*Spectator receipts were a record at the time.

And the tournament seems to have had everything you could ask for…..

From Bobby Fischer: A Study of his approach to Chess by Elie Agur, 1992:

From Grandmasters of Chess:

‘Then, without thinking very long over it, Bobby made his notorious twenty-ninth move (29… Bxh2?)…..’

From Grandmasters of Chess:

‘Was it a blunder or a deep conception that mis-fired?'

Back to Slovenia I

From Bobby Fischer: A Study of his approach to Chess:

‘I still remember the days of the world championship match between Bobby Fischer and Boris Spassky in 1972.’ – Garry Kasparov in the forward

Back to Slovenia II

To be continued (possibly)

A Mystery Quest finishes but