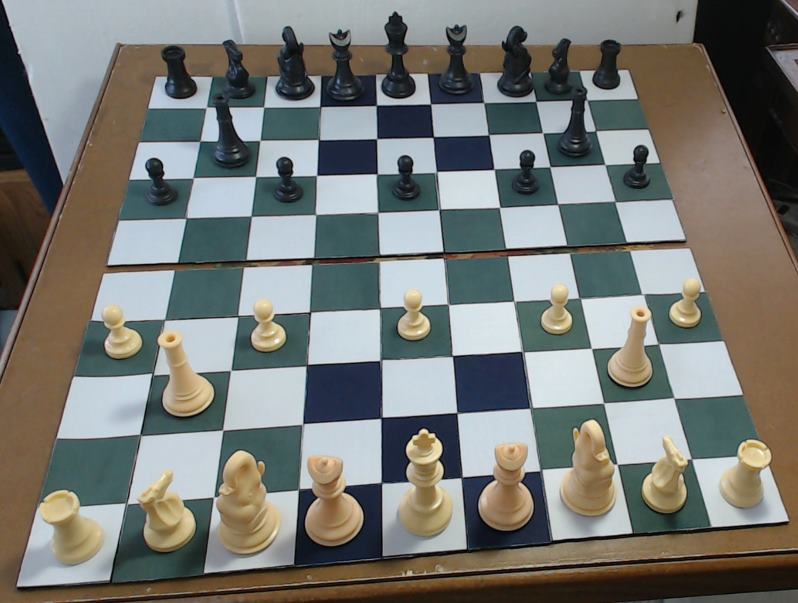 Take a quick survey of the many Chess variants described on this site, and you will soon realize that only a fraction can be played with the usual Chess equipment. Many others include extra pieces or are played on non-standard boards. While you can buy sets for some of these games, there are still many more you cannot buy sets for. Besides that, even if commercial sets were available for every variant, it could get ridiculously expensive to buy a separate set for each game you wanted to play. A much more practical solution is to put together a Chess variant construction set, which you can use to put together boards and supply pieces for a wide variety of games. You cannot buy one readymade, but you can put one together.

I came up with the idea of a Chess variant construction set in 1998, shortly before I got involved with this site. After I met David Howe, he improved on my idea, putting together a better set than I had made. The idea is similar to having something like Legos, Lincoln Logs, Tinker Toys, or Micronauts, which you can put together into different combinations to make different toys out of. The main ingredients of a Chess variant construction set are Chess pieces and board parts. A good set should include various fairy pieces and a few sets of standard pieces. Board parts will generally consist of single spaces and board segments that can be quickly pieced together into various board shapes. Since some of the products I previously recommended are no longer available, and since this site is now an affiliate with some places you can buy Chess variant equipment, I have updated this page to point you toward currently available products you can include in a Chess variant construction set.

The following Chess variant pieces are currently available from The House of Staunton:

Since these pieces are triple-weighted natural colored pieces, you may want to get matching Chess pieces. And for large variants that need extra pieces, such as three Bishops in Hexagonal Chess or ten Pawns in Capablanca's Chess, you may want two sets. For a good match with these pieces, I recommend two of these in the Black & Natural coloring.

For multi-player games, you may want to get another set of Chess men in a different color. So that the pieces work together, I'll recommend a triple weighted set.

Some Chess variant pieces can be found in commercial Chess variants. My own construction set includes Champions and Wizards from Omega Chess, Chancellors and Archbishops from Gothic Chess, and some figurine Chinese Chess sets. Unfortunately, these are not currently being sold new.

Another source for pieces you can use in Chess variants are Chess sets in various different styles. Here are some suggestions from The House of Staunton:

In case these are too expensive, or you want some more options, here are some recommended eBay searches for sets you may find suitable. If you're in Australia, Britain, Canada, or the United States, these affiliate links should send you to your local eBay. If you're not in one of these English-speaking countries, you may still be able to search your local eBay using the affiliate link in the Shop menu.

I originally cut squares out of cardstock, which I would meticulously piece together, then place clear plastic sheets over to keep them in place. David Howe improved on this idea by buying chess boards made of rubber and cloth like mouse pads are, then cutting them up into different shapes that could quickly be put together into different board shapes. I won't recommend cutting squares out of cardstock. Cutting up mousepad-style chess boards is the much better option. Because you can cut them into different shapes, making a board is much quicker than laying out squares one at a time. Because the pieces are heavier than cardstock, you don't have to cover them with anything. And since you're cutting up chess boards, the end result looks more like regular chess boards than cardstock would. Depending upon your needs, I recommend getting from two to four beige and olive chessboards and an additional one with dark squares that are a different color than olive. I got one with beige and dark blue squares. This is used for games in which some squares should be in a third color. You can get these boards from The House of Staunton through this affiliate link. And if you buy four or more, you will get a discount.

I recommend cutting up the four regular boards like so:

With segments cut from the first two boards, you can make the following boards:

With segments from the first three boards, you can make the following additional board:

With segments from all four boards, you can make the following additional boards:

Because a variety of games can make good use of boards with three colors, I recommend getting an additional mousepad-style board with a different color for the dark squares. I recommend cutting it up like so:

The main use for this extra material is to mix with the main green and buff material to make three-color boards or to distinguish some areas of your board. Here are some samples of what you can do.